The term 'Special Paving' refers to paving that performs a function other than simply being a surface to walk upon or drive over. This could be, for example, deterrent paving, safety paving, tactile paving, or any of the other specialised forms that we use to improve the functionality of our outdoor surfaces.

Progress in technology has allowed the development of paving units designed to fulfil special purposes. 'Deterrent' paving is intended to impede pedestrians and/or vehicular traffic, 'Tactile' paving is used to inform able-bodied and disabled pedestrians of potential hazards, and 'Safety' paving is a broad term that covers paving utilised in areas where increased traction is desirable, such as steps and ramps, and also the special cushioned paving increasingly used in children's playareas.

Deterrent paving is usually installed by local authorities or the Highways Agency to impede pedestrian access to areas of danger, such as dual carriageways, motorways, or to block off a road or lane to vehicle access. It is increasingly incorporated into urban highways schemes, where the management and safety of pedestrian traffic is considered as important as the management and safety of vehicular traffic.

There is little call for it in the residential market.

Over the last 20 years or so, there has been a conscious effort by local authorities in both Britain and Ireland to install 'Tactile' paving to alert the visually impaired to the presence of light-regulated and uncontrolled road crossings. Most of us will have seen the red or buff coloured paving with little bumps on the surface, laid at Pelican crossings, but there are some other patterns used to denote various other hazards.

Available as flags or as brick pavers.

Safety paving is becoming more and more popular; pavings with enhanced 'grip' are being specified for sites where traction is important, and the growth of the 'Family Pub' has seen concomitant expansion in the market for cushioned paving or 'Impact Absorbing Playground Surfaces', to give its full title.

This page will look at some of the various types of special paving used in Britain and Ireland today. Laying methods can be found on other pages dealing with Flag/Slab paving and Block paving, except for the playground paving which is generally laid in the manner of floor tiles, by bonding the units to a pre-formed solid base.

There are various types of deterrent paving, some are severely pedestrian and traffic unfriendly, others less so. Three readily available ready-made types are shown below. Note how the different shapes have varying degrees of deterrence.

All the above paving units are manufactured by Marshalls Ltd , Halifax, W.Yorks

The deterrent paving shown above is manufactured to BS sizes and is normally laid in the same way as other flags and slabs, shown on the Laying Flags page. However, some of these units are quite heavy, up to 50Kg and may need two men to handle them or special 'scissor grabs'.

There's no doubt that the pedestrians do find these pavings to be uncomfortable to walk upon, which is probably a good thing as they are particularly prone to accumulating litter and detritus in the recesses.

It is also possible to construct a form of deterrent paving using standard block pavers , either concrete or clay. The design requires that 2 different thicknesses of blocks are used, to create the height differential necessary for deterrence. 50mm thick blocks mixed with 80mm thick blocks will give an upstand of 30mm, just enough to deter most foot and vehicle traffic.

The method is to pave the required area as a normal pavement, using the thinner of the blocks following the principles outlined on other pages, and, following completion, to replace some of the thinner units with the thicker ones. This replacement can be done as a pattern or in a totally random manner, as suits personal taste and requirements. There is a guide to removing individual blocks from a pavement on the Repair and Maintenance Page.

A deterrent technique that is growing in popularity is to use the blister studs more normally associated with tactile paving installations as 'protection' for hard streetscape furniture such as low walls, planetrs, benches, etc.

Visually, this technique is probably less intrusive that more structured forms of deterrent paving, and is fairly well targetted at users of small-wheeled vehicles while remaining more-or-less unnoticed by pedestrians and wheelchair users.

Tactile Paving is now covered on a separate page . 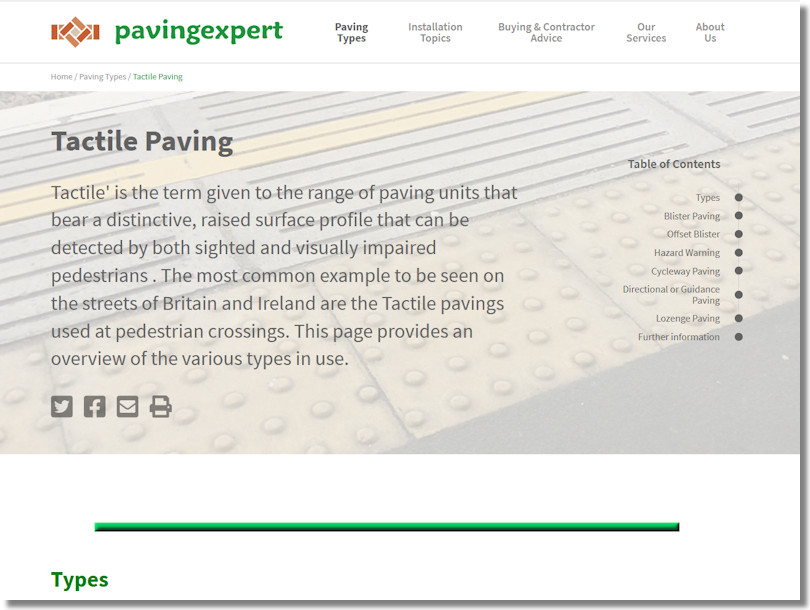 These pre-cast concrete paving units may have a surface profile of raised bars, so-called 'Barface', as an aid to traction on ramps or steps. In some units, the bars are replaced with rubber-like strips. These flags are available in BS sizes and are laid in the same manner as standard flags, as shown on the Laying Paving page. They can also be used as a textured or decorative paving for patios or courtyards. 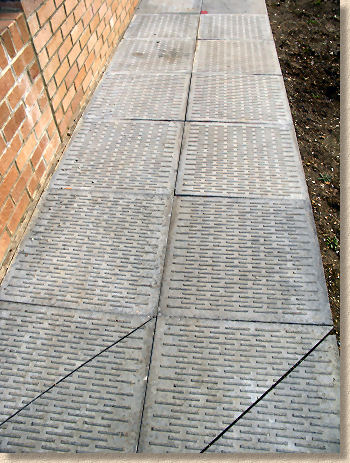 For many years, selected bark chippings have been used as a cushion or safety covering for children's play areas. The use of bark as a dressing for informal paths is covered on a separate page, but for play areas, a 'depth of fill' of 300mm is usually recommended. Here, we will look at the specially manufactured units.

There are a series of recommendations and British Standards that cover exactly what type of 'safe paving' is to be used in a given situation. For children's playgrounds, the height of play equipment and the 'Critical Fall' height are calculated and the correct type of impact-absorbing surface is then identified. The paving is used to surround all play equipment, with a spread of 1.75 - 2.0 metres all around the equipment.

The two main types of this type of surfacing are tiles and wet-pour. The safety 'tiles' are generally made from shredded or crumb rubber, and come in a range of thicknesses, from 25mm 'Low Impact' play mats, to 100mm thick High Impact tiles, and a reasonable range of colours.

The wet-pour method relies on an aerated rubber-based fluid being spread and levelled over a prepared sub-base with edge retainers. The 'goo' cures quite quickly, forming a solid, yet cushioned monolithic pavement. This is a job for specialist contractors and will not be covered any further on this page, but lots more information can be found by following the link below.... 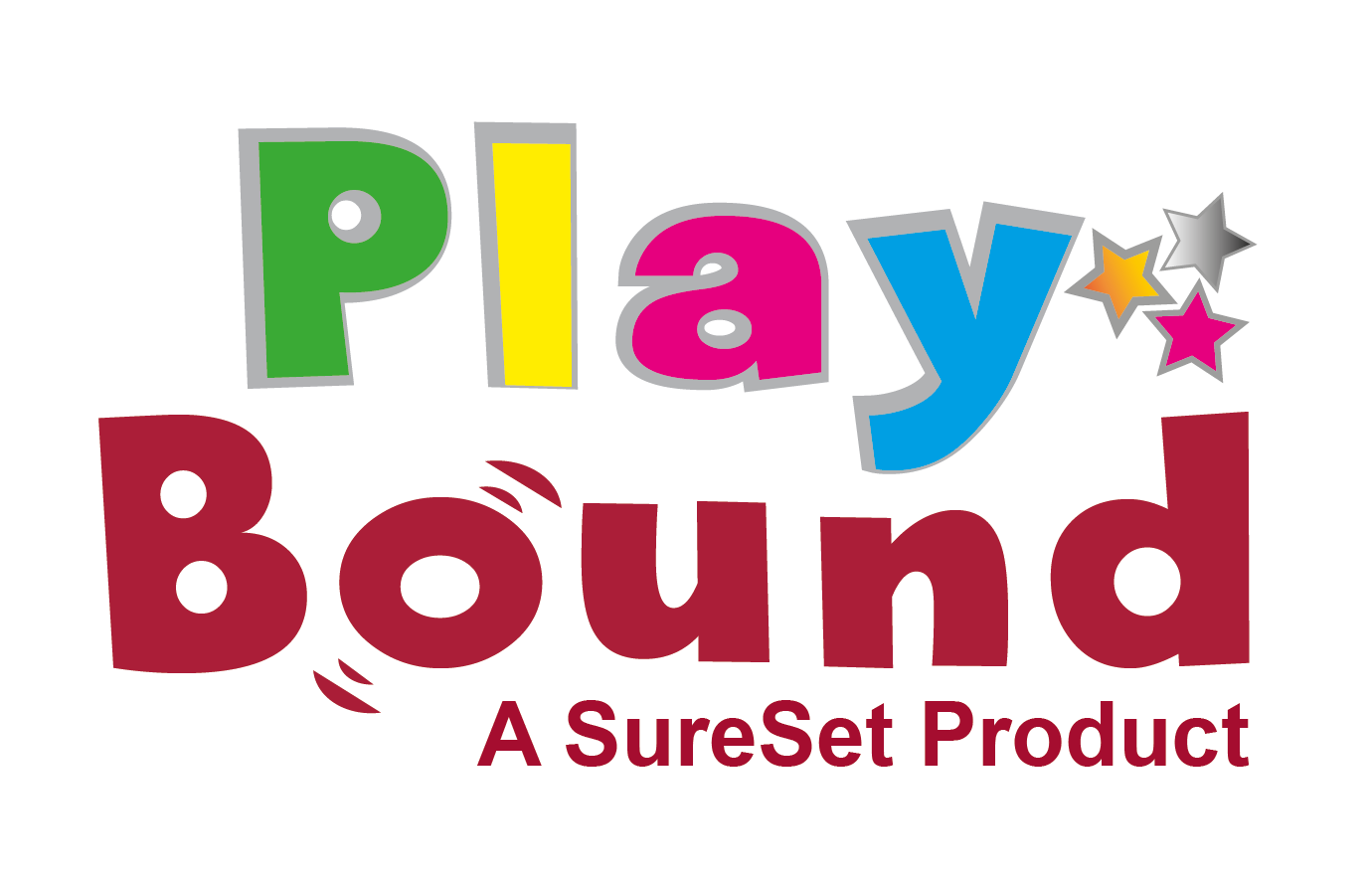 Most tiles are laid by bonding them to a prepared concrete base, using a high-strength glue, although some proprietary systems have fittings that allow individual tiles to be removed and replaced. The 75-100mm thick concrete base is laid as detailed on the page covering Concrete construction, with a shutter at the edges.

It is essential that the impermeable concrete base is adequately drained to prevent waterlogging of the porous safety tiles.

The area to be covered can be of any of shape, not just rectangular. The full tiles are laid first before the edge tiles and those around the supports of play equipment, are cut with a saw to the exact shape required, and fitted into place. There are special ramp-edge tiles available that can be used at entrances to play areas, tying in to standard paving with no trip or step.

It should be noted that these safety tiles are not particularly cheap to buy, ranging from £18 per m² to in excess of £50 per m². The requirement for a concrete sub-base adds to the total cost, which can be push the total job cost to be in excess of £100 per m²

There are contact details for some of the bigger suppliers and installers on the relevant links page.