Hey! This is a bit posh, the latest brochure from Global Stone . They must be doing well to put out such a luxurious publication, which must be at least two divisions above their previous efforts. This has the look and feel of a major player in the residential/designer paving market.

For those not familiar with the name, Global Stone is what used to be the natural stone trading business of Colchester-based independent Builder's Merchant, Kent Blaxill, who have been plying their trade from nine branches in and around Essex for many a year. They were one of the earliest entrants in the great natural stone race that took place just after the turn of the century, and it seems they are now truly reaping the rewards, with a stand-alone business, a finely-tuned collection of stone paving, and a snazzy new brochure that runs to a chunky 68 pages, including front and back covers. 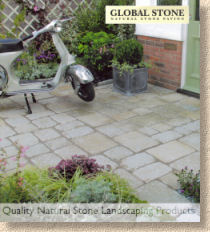 Like certain other suppliers serving the more well-to-do end of the patio/garden market, they've opted for a distinctive square-ish format, actually 212x234mm, with a stiff glossy card cover featuring one of the product photos used within, over-printed with an understated brand logo and frosted caption proclaiming their trade as purveyors of "Quality Natural Stone Landscaping Products". The year of publication is discreetly located on the spine, which will facilitate identification and look smart on the paving library shelf (What? You don't have a paving library? Are you a philistine?)

There are two aspects for consideration when reviewing the brochures, catalogues and other literature provided by the larger independent suppliers: the products themselves, and the way they are presented within the brochure. Obviously, it's impossible to thoroughly assess the physical qualities of the products, so a review such as this can only assess the range; that is, the breadth of selection, and the styling of the products which encompasses sizes, shapes, colours and textures offered. Presentation is much more straightforward.

Global Stone have always been one of the more discerning suppliers, so it's a safe bet that the selection will offer a well-considered range of stone types in a small but sensible range of formats, ranging from small setts up to large flagstones, via walling blocks, stepping stones and the inevitable haemorrhoid-generating stone patio table and alleged “chairs”. With the wealth of stone products now entering our ports and harbours, it's tempting to offer too much, to fill up page after page with all sorts of esoteric stone products from the most inaccessible corners of the planet, but this is often counterproductive as the customer is left dazed and confused, bewildered by page after page of virtually indistinguishable flags, setts, and blocks. Give me a choice selection of proven stone in proven formats, every time!

Which is what Global Stone have done, for the most part. After a few welcoming words from the ever-charming General Manager, Shirley Spittal, the contents page reveals that the products have largely been divided by type of stone, with new products and new colours within existing ranges clearly indicated. The Rectory range of "weathered" (or "antiqued" or "distressed" or whatever you prefer to call it) sandstone flags and setts have been given star billing above their plain, uncomplicated sedimentary cousins. The range previously featured solely sandstone, but 2008 sees the introduction of two limestones, the wan sage tones of "Verde" and the chilly crisp notes of "Imperial Blue". Still only the four sizes in the flagstone, plus the circle kit, with out without squaring-off kit. The "Rectory Cobbles", which are actually setts, come in four relatively hefty sizes (200x150/200/300 and 300x400), but the circle features are only available in the sandstone options. I can't recall seeing the Rectory Walling in-the-flesh, but judging from the brochure photie, it's been tumbled for too long to suit my taste. The arrisses are extremely rounded, almost bull-nosed, so it really needs well-raked joints to prevent it looking over-mortared.

Like Rachel Mathews, the tame garden designer drafted in to add comment to the brochure, I'm a big fan of the Rectory Cobbles/Setts, and that's largely due to their size. I love the fact that they are not piddling half-hearted dainty little things, but straddle that delicious middle ground between setts and flags, and the four sizes enable greater design freedom, even the possibility of random layouts.

The sandstone range is exactly what we've come to expect from an imported sandstone. The flags are available in the eight familiar colour blends and six sizes, supplemented by bull-nosed steps, edgings, octagons and circles. I'll not waste valuable bytes describing what is now standard fare for any stone paving supplier; instead, I'll save those bytes to give a mention to the new "Linear" and "Mirage" products. These are calibrated and honed sandstone with a gently chamfered edge designed for internal and/or external use. Linear has what I call "floorboard styling", coming in just the one size, 140x845 (roughly 6:1) and intended to be laid coursed (although herringbone is also possible). Mirage offers three standard sizes (285x285, 285x570, 570x570) so enabling patterned or random layouts.

These honed sandstones are becomingly incredibly popular for kitchen floors, where they benefit enormously from the application of a really good quality sealant (and optional colour enhancer). Outdoors, their styling is very much “contemporary” rather than “traditional”, despite the fact they are natural stone. Honing and sawn-chamfered edges renders them more akin to tiles than traditional flags, but they remain cold-to-the-touch, so, if you're planning to use them for a new floor, consider installing UFH first (look it up!)

Moving on to limestone, there are three products. The dark grey flags in four sizes need no real description, but the “Classic Tiles” in what I would call honey and charcoal colour options deserve wider recognition. Just the one size (200x200) and they work with both colours used alternatively: using just one colour tends to de-emphasise their charm, and the single size doesn't help. Meanwhile, the “Golden Glory” paving range comes in four sizes (200x200/400 and 400x400/600) and features a mottled honey-grey limestone. This looks great in random layouts, but the brochure images show only the rather more staid single-size stretcher bond format.

Switching to the metamorphic stone next, and first on parade is the slate. Just two colours, a sombre charcoal grey and a foamy-marine sage colour that is perfectly named as “Ocean Green”. In flag format (4 sizes) it really doesn't do a lot for me, but when it's been put through the old tumbler, the Ocean, in particular, looks stunning with its rugged texture and formidable edges. Again, those clever people at Global have brought out the best in this stone by choosing sizes that might be considered large setts or small flags, and look bloody gorgeous in a random layout. I raved about these “Antiqued” pavers at Glee last September, and everything I've seen since then has served only to convince me that I was right.

Marble is metamorphosed limestone and it is being promoted as a potential 'next big thing' for indoor/outdoor paving. I'm not a fan. The blue-tinged offering here is very pretty, but I still think it looks better under bright Mediterranean skies. Viewed in a back garden on a brisk day in March, it reminds you just how far away summer can be.

If marble is metamorphosed limestone, then travertine is crap metamorphosed limestone with added muck-collecting vesicles. I've never been a fan of this stone for paving in Britain and Ireland. As a wall cladding, as countertops, or when it's back home in the eastern Med, it is fine, but it has no place over here. I honestly believe it is bought by misguided fools on their return from their two weeks in Cyprus, Crete or Turkey, convinced that putting it down as their patio will somehow recreate that holiday atmosphere. Wrong! It goes green, it gets slippery and the vesicles will be full of what is politely referred to as detritus in next to no time.

I find it hard to be objective about Travertine. I know for a fact that Global Stone spent a long, long time sourcing the best travertine available, and agonising over the colours and sizes, so, if you like it, you are unlikely to find better, but I wouldn't have it underneath the kennel of a dog with chronic diarrhoea.

Nor would I allow any of the Global Stone granite to be used beneath the kennel of the aforementioned sloppy-arsed cur: but only because it's far too good for that, and deserves to be seen as widely as possible. Setts in the usual range of colours, augmented by long setts (which are also misnamed as “cobbles”), flags in strange imperial dimensions, and a single-size circular(ish) stepping stone. The “Polar Sun” is said to be a new colour, and from the photo in the brochure it seems to be the slightly-rusty looking granite (G636?) that is very reminiscent of weathered Wicklow granite.

It's shown as long setts laid flexibly to a herringbone pattern, and I know several other suppliers are sanctioning this method, but I worry about controlling the joint width. The blurb states a tolerance of ±10mm, which makes for bloody hard work if laying herringbone, but I'd be surprised if there really was that much dimensional variation with these setts: perhaps that figure applies only to the cropped cubes and flagstones. However, even if the long setts are calibrated, there's a real risk of direct set-to-sett contact with no intervening jointing to generate the necessary interlock. This is not hyper-critical for residential driveways; it's less than ideal, but it's not enough to warrant the setts unfit for purpose, as long as the sub-layers are properly constructed and compacted. Given that it's impractical to incorporate spacing lugs on the sides of the granite setts, I'd be happier to see some form of joint-forming spacers used during construction ~ even if it's just a matchstick!

That's the end of the products; what follows is a relatively comprehensive guide to possible layouts, along with an exceptionally well-written guide to installation that lacks only illustrations to make it the best yet seen in a brochure from any manufacturer.

I should disclose my involvement: I wrote the laying guide, so there's no point in me publicly criticising my own work; I subject myself to infinite self-doubt and dithering while writing this type of guide to a fixed word/space limit. However, I'd be happy to hear from anyone with constructive criticism, as I still feel it is possible to be more succinct without sacrificing clarity, and if I'm ever asked to do this kind of thing again, I'd like to get it down to less than 1,200 words.

Overall, the Global Stone brochure exceeds expectations. No-one really expects an independent importer to produce a catalogue of such consistently high quality. Thankfully, it omits most of the trumpet-blowing, marketing hype and fatuous aspirations that blight some of the offerings from much larger companies, and relies on sparse but simple text, with good quality full-page photos and adequate technical information. It conveys the air of a substantial and reliable company behind the scenes, without ever suggesting you're paying through the nose for an exuberant marketing budget. Can you really ask for more than that?

Download a PDF version of the 2008 Global Stone Brochure here