Black spots appearing on new-ish paving are a major source of concern, but what are they, and what can be done to get rid of them?

My lovely natural stone patio is only a few months old and has become covered with black spots that are impossible to move. What is it and how can I clean the paving?

The black (sometimes white) spots are almost always a lichen, pronounced ly-ken in most places, but as lit-chen by the sort of awkward sod who revels in perversity for the sake of it. Other than disfiguring paving in the damper parts of Britain and Ireland, their main claim to fame is that they are a favourite nibble of Reindeer. However, it has not been possible, so far, to prove that their prevalence on the patios of these islands is in anyway related to the lack of the aforesaid grazing Reindeer.

Lichens are strange things. They are symbionts, which means they are two different organisms living in sin, if you will. There is a bit that does the photosynthesis business which is usually some form of algae or bacteria, and this gets into a mutually beneficial relationship with a fungus, which functions as an anchor as well as acquiring minerals from whatever it is the lichen is growing on. The fungus sends little fungussy rootlets, known as hyphae, down into the substrate, namely the paving or walling, and such is the tenacity of these things that it's damned near impossible to shift them. They form a 'crustose' growth, which means they are flat and stick like the proverbial to a blanket.

As hundreds, if not thousands of visitors to this site have commented, brushing, scrubbing, and even power-washing can have little effect on the disfiguring little spots, and the longer they are left unchallenged, the bigger they get.

Which landscaping materials are affected?

The exponential growth in the use of imported stone for paving in recent years has provided a wonderful new opportunity for lichen. Although they can and do set up residence on concrete paving , it wouldn't naturally be their first choice. What they like is a nice, porous, easily penetrated sedimentary stone, which is what we've been providing for them in abundance with the mass installation of imported sandstone paving.

The limestones imported from the same part of the world are less affected, but not immune, and the various granites and basalts from wherever are much more resistant, due to their crystalline rather than granular structure.

As mentioned, concrete products are liable to colonisation by these airborne squatters, but the type of concrete will determine just how badly affected is any particular paving. Wet-cast products with a relatively low cement content are noticeably more prone to lichens than cement-rich pressed pavers .

Decorative concrete is fairly resistant as long as the seal coat is intact and in good condition.

Tarmacadam , asphalt and resin-bound surfacing is less commonly affected, but again, it is not unknown.

It has been pointed out that cement mortar joints are rarely colonised, but it's uncertain whether this is actually true or whether simple weathering and erosion of the jointing doesn't give the lichens long enough to set up camp.

How can they be removed?

There are various home remedies and proprietary products that are alleged to remove lichens from paving, but, as they used to say, "Your Mileage May Vary" (YMMV). Some of the suggestions given below have worked for some and failed abysmally for others.

Obviously, the type of stone, the extent of colonisation, the particular habitat, and the day of the week (probably!) will all affect the efficacy of any of the suggestions below, so if at first you don't succeed, try summat else!

Two very important points to raise before trying anything:

Be warned: many so-called "Patio Cleaners" contain acid of some form or another and the suppliers are particularly unhelpful when informed that their product has turned a patio bright orange. It's notable that lighter coloured stone (Kandla Grey, Mint, etc.) seem to be more severely affected than some of the darker stones (Raveena, Raj) 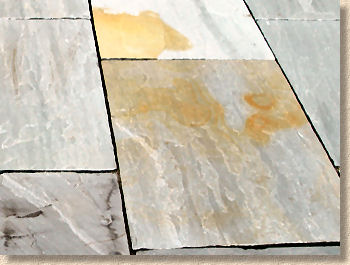 The cheap 'under the kitchen sink' remedy:

Sodium hypochlorite, also known as bleach, can be found in most homes, and it can be quite effective in treating early colonisations. It's also very effective at keeping fresh colonisations at bay. Paving that is regularly washed down with diluted bleach (roughly 1 part bleach to 10 parts cold water) are subjected to fewer lichen invasions than untreated paving.

Site User Edward Caunt from Nottingham advises that 'bulk quantity' purchase of Sodium Hypochlorite to treat larger areas or just to keep up stock throughout the season, can be far more cost-effective than buying individual smaller containers of bleach, and certainly much, much cheaper than some so-called specialist black spot cleaners. In 2017, he's just bought 25 litre containers of 15% Sodium Hypochlorite for only 28.50 GBP!

He also *strongly* recommends using a face mask, goggles, rubber gloves and wellingtons. he says, "I use it neat, pouring with a plastic watering can. Use it in the winter as it will kill all plants close to the edge of the patio when hosed down. Several friends have followed my advise and found a 'new patio'."

The strength of bleach varies from brand to brand, so accurate information on dilution rate is impossible to provide. However, some key points to note:

AJ Smith of Dorset has experience of working with chemicals and he emailed to advise....

"When mixing water and the Sodium Hypochlorite (bleach) one should add the sodium to the water, not water to sodium. This way there is less danger to the user from splashing."

A couple of 'off the shelf' remedies that have performed well for some users...

The Hagesan product is based on ammonium chloride, a quaternary ammonium compound (see below)

So: no luck with the bleach then? Time to put a hand into the pocket or purse and invest in a little chemical warfare. The chemicals known to adversely affect lichens and loosen their hold on stone and concrete include:

This is NOT the same as sodium hypochlorite (bleach). It can be obtained from most swimming pool supply stockists (doh!) and should be used in conjunction with a garden hose (NOT a power washer).

Suggested dosage is 30 grams per 5 litres of cold water

Pre-wet the surface to be cleaned. Make up the solution and use it to wash down the area by applying from a watering can. Use a plastic/nylon bristle brush to agitate the surface. Hose down with clean water after 5-10 minutes.

Always use diluted, to at least 1 part Ammonium Hydroxide to 5 parts cold water.

These are often sold as algaecides or fungicides for swimming pools.

As there are so many different products in this group, generic advice isn't possible. You should follow the manufacturers' instructions.

- Cleaning of concrete fouled by lichens with the aid of Thiobacilli

And finally, there's always sandblasting...seriously! It has been used to great effect on some heavily stained projects, creating a completely new - and lichen free - surface, in prefect condition for lots of new lichens.

Prevention is better than cure:

Naturally, if there was some way of preventing the airborne lichen spores reaching the paving in the first place, that would save all the kerfuffle involved in cleaning, as outlined above. Luckily, there are two reasonably effective strategies that can keep the lichens off a paved surface.

Sealants are a whole new headache, and are covered in more details elsewhere on this site , but even the best sealant is pretty much useless if detritus is allowed to accumulate on top of it. Not only will the lichens find a home in all that crud, other enemies of the pavement, such as dandelions, dock and scruffy grass will move in too!