Drainage for Paving and Gardens

Unless it's permeable paving, a pavement without drainage is doomed to failure. This leading page introduces key concepts and provides definitions of the more commonly used terms. It also provides links to other pages on the site that go into much greater detail regarding key aspects of drainage methods and materials.

For the purposes of this site*, drainage can be divided into two convenient areas of discussion;

Because this is such a large subject area, it has been split up onto a number of pages, dealing with the intricacies of draining pavements, making new connections, installing new gullies, land drainage, fin drains and much more. The remainder of this page deals with the basic concepts and definitions.

There is one question that is asked by some reader of this site almost every week: "At what point in the drainage system of my house does it become someone else's responsibility?"

This is one of those, " If I had a pound for every time I'd been asked.... " questions, and so, to save me having to type it out in countless reply emails, here is the answer....

On properties built in England and Wales before 1937 and the implementation of the Public Health Act, the drain is the property and responsibility of the householder until it joins up with a drain or drains serving other, separate properties whereupon it becomes a Public Sewer and the responsibility of the local water authority and/or their agents.

Properties built after 1937 generally have their sewers mapped by the Water Authority and they maintain a record of all adopted sewers, ie, sewers for which the Water Authority has adopted responsibility. Unadopted sewers serving more than one property are 'Private Sewers' (see definitions below) and responsibility is shared by all those using the sewer. However, as eagle-eyed reader Chris Barton has pointed out, some of the water companies have now adopted a number of Private Sewers.

A drain serving only one property is the responsibility of the property owner up to the point immediately after the junction where it joins a public or private sewer.

If you work in the industry, you've probably heard this term; if you're a DIYer, self-builder or you ended-up on this page by accident, then it probably makes you think of detergent.

SUDS, or SUstainable Drainage Systems, is new-ish way of thinking about how we drain our land and buildings. Rather than send all that innocuous clean water off to the local ETW where it merely dilutes the real nasty stuff, the aim nowadays is to deal with surface water at source, what's known as Source Control, and direct it into the ground, where it belongs, as soon as possible.

SUDS involves various, simple technologies, and you can read much more about them, and about the thinking behind SUDS, on this page .

A Sewer is defined as an underground pipe or channel owned and maintained by a statutory body (usually one of the privatised water companies) and used to carry waste water or sewage.

A Drain is most commonly defined as a pipe or channel owned by an individual, usually the property owner.

A Private Sewer is a drain shared by a group of residents/property owners.

All drainage systems, both above ground and below ground, work by creating a slope and relying on gravity to cause the water (or other liquids) to flow from the high point to the low point. This is known as the 'fall' and can expressed in a number of ways, usually either a percentage or as a ratio.

All gradients are defined as the amount of rise (or fall) in height above a fixed point over a given distance (the run). Gradients are expressed in a number of ways, including Ratios [eg: 1 in 60 or 1:60] and Percentages [eg: 9%]

Gradients and falls are explored more fully on this page

For 100mm pipes, the type normally used for residential drainage, the minimum acceptable falls are 1:40 for Foul Water and 1:100 for Surface Water. Larger diameter pipes may have gentler gradients in certain circumstances.

Also referred to as Storm Water.

Clean (ish) water that has been drained directly from the ground, a pavement or a roof. Also known as 'run off'.

Water held by the soil, subsoil or bedrock. The upper level of the groundwater is known as the 'water table' or 'saturation line'.

A drainage system that mixes Foul and Surface water and carries both in a single pipe.

also knows as "Longfall", this is the fall or gradient along a pavement or drain, ie, the water will be drained in the same direction as the pavement/drain is running.

is the fall across a pavement, ie running at or about 90° to the direction of the pavement. Many footpaths alongside roads have crossfall, draining the footpath onto the road. Crossfall is not found in drains, only on surfaces. 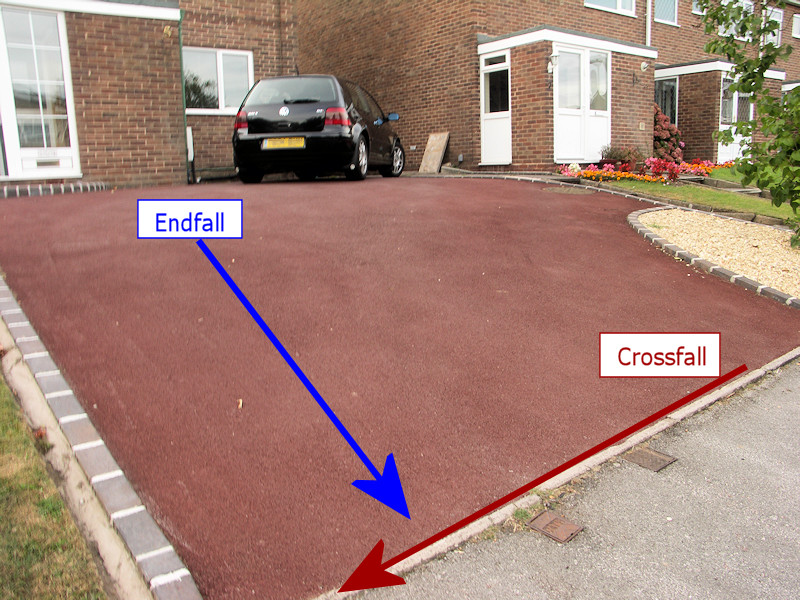 is the term used to describe a gradient that is counter to what would normally be expected. In the footpath example from above, a footpath that sloped away from the roadway would be said to be backfalling. Backfall in a drain is usually bad news - it indicates that water/sewage may find itself trapped at a low point.

This is a term that seems to have been specifically designed to befuddle students and others outside the trade, but is actually a much needed term for the sake of clarity on site. It refers to the height above/below a Benchmark of the lowest part of the pipe channel at a given point on the drainage system. The key point is that it refers to the level of the floor of the pipe on the inside , not the base of the pipe on the outside, which can be 10mm or more lower still, depending on the thickness of the pipe.

The highest point of a manhole (or other access chamber) is the cover level (CL), which is the height of the cover above a benchmark level, and the difference between Cover Level (CL) and Invert level (IL) is the overall depth of the chamber. On drainage plans, manholes are often annotated with figures for IL and CL, and the difference between the IL figures for successive points of a drain run (usually manholes or other chambers) are used to calculate endfall.

There are further definitions for various types of drainage fittings given on the Gullies and Gratings page.....