Self-binding gravels contain significant quantities of fines which helps them loosely bind together, rendering them incredibly useful of landscaping projects.

Self-binding gravels are somewhat different from the more typical gravels mentioned on other pages. Most of the decorative and surfacing gravels are what we term 'clean', that is, they have had all the fines (dust) removed and they are, essentially small pebbles. In contrast, self-binding gravels include a generous serving of fines - indeed, with some products, fines are actually added to improve the self-binding ability.

The result is that the fines and particles knit together and compact to form a surface that is less susceptible to scuffing and being kicked all over the place, but isn't 'permanently hard', in the sense that a concrete, bitmac or resin surface would be. In general, most of the self-binding materials can be dug out years after first being placed, crumbled and re-used (there are certain exceptions).

They are extremely popular products for commercial or public applications where a simple, cheap, low-maintenance, natural-looking pathway or trackway is required. They can be found on almost every golf course, and they are widely used for Parks, Nature Trails, Bridleways...in fact, you've probably walked miles over these products and never realised what it was!

There is a wide selection of these materials, but most of them tend to be 'local'. They are quarried and distributed over a local area and rarely travel more than 30 miles (50km) from source. They tend to be a cheap, easily obtained, soft-ish local stone with no other potential use, other than as a surface dressing for footpaths and low-speed trackways. So, in Northern England, they tend to be limestone based, or one of the softer Namurian grits, while in Scotland they might be the Old Red Sandstone (Bunter). Slate Waste is popular in North and Mid-Wales; limestone and drumlin gravels in Ireland; granite waste in Cornwall; Portland gravel in Southern England...and so on.

There are a few products that perform so well they have established a nationwide market, at least in England (see list at bottom of page). The most well-known of these is the Breedon Gravel , a crushed magnesian limestone from Derbyshire that has an attractive colour described as 'Golden Amber'. It's found favour at Buck House in London, where all the paths are dressed with it, and it has also been used on other properties belonging to Her Maj and the other Royals.

Another nationally available product is "Cedec", a product developed and sold via the CED group of companies, based in Thurrock, Essex, but available from any of its branches. This product is a mixture of crushed granites and quartz that comes in either a red or a buff colour. Unlike the Breedon gravel, Cedec is pH Neutral and chemically inert, so it is popular for use in planted areas, particularly those where acid or alkali sensitive plants have been used.

The self-binding aggregate is spread and levelled whilst damp/moist and then compacted using a roller or vibrating plate. The material 'sets' when dry, but not to the same extent as would a concrete or bitmac. The surface remains loose-ish and dusty but eventually does 'harden' to the point of becoming impermeable in some heavily trafficked projects. This is where it comes into its own, as if ponding is occurring, the material can be loosened using a fork or a pick, which will open up the drainage and, hopefully, alleviate the ponding problem. 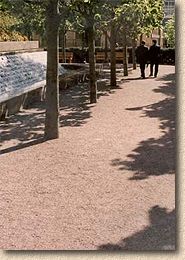 Redpave, by Oxfordshire-based Grundon, is a red-tinged dolomitic limestone that is increasingly popular.

The basic construction for any self-binding gravel pavement is the same as that for other gravels. A sub-base is essential, and this should be laid over a prepared sub-grade, with an optional separation membrane used between sub-grade and sub-base, if ground conditions warrant it. The sub-base should be not less than 75mm deep for foot traffic and at least 100mm thick for light vehicles. Once compacted, the self-binding gravel is spread over the surface to a depth of 40-50mm and then compacted.

Edging kerbs or other edging units can be used, if preferred. These have the advantage of containing the self-binding gravel, but, for more casual, natural setting, the edging units are often omitted and the grass or adjacent vegetation is allowed to encroach on the edges of the pathway to give a softer, less harshly-defined appearance.

Where edgings are used, it's standard practice to keep the level of the self-binding gravel low by around 6mm or so to prevent migration of the material over the top of the edging. However, the surface must not be kept too low or a trip hazard may develop. 6mm is fine.

As with other gravels, self-binding products are not suitable for use on any gradient greater than around 1:12, although the extent of migration experienced with self-binding gravels is considerably less than that found with loose gravels.

Whenever a gradient needs to be accommodated, then a series of steps is the most appropriate solution. As mentioned above, some form of edge restraint will be required to contain the self-binding gravel, and the level should be kept slightly low (6mm) to minimise loss of material. 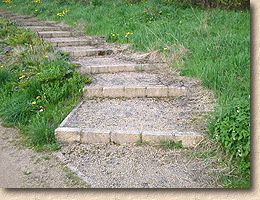 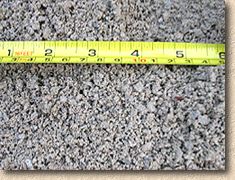 Coverage is variable, as it depends on the density of the material itself, and also the moisture content, but, as a rough guide, 1 tonne of a typical self-binding gravel will cover around 10-12m² at a thickness of around 40mm. If you're buying in smaller quantities for a DIY or garden project, then reckon on 2 - 2½ 40kg bags for each square metre.

In some regions, a cheap local stone crushed and processed to ensure a relatively high fines content may be used as a path surfacing. The Lancashire sandstone used in the accompanying photies is a good example of a 'nearly self binding gravel' being used to maintain a local feel on a nature reserve pathway. While not strictly a self-binding gravel, the large percentage of fines does help create a fairly 'tight' surface that will give several years of adequate service, and the absence of any lime (limestone) won't affect the flora of what is a sensitive site.

Note the preponderance of fines (dust) in the sample shown above. It will usually exceed 30% of the volume and help create that tight surface required for comfortable pedestrian usage.

Once spread, levelled and compacted, as shown below, the surface is close-textured and reasonably resilient to foot traffic. On this particular site, the avoidance of lime was more important than the cost saving brought about by using a local (within 10 miles) stone.

It should be noted that while self-binding aggregates are a low-maintenance surface, that's not the same as NO maintenance. Weeds will establish themselves on the surface - they do not grow up through the construction, but rather the seed settles onto the surface and the weed grows into the surface.

However, they are fairly easy to remove, using a spring-tined rake or a shovel, and the self-binding gravel is simply re-levelled and stamped back down into place. 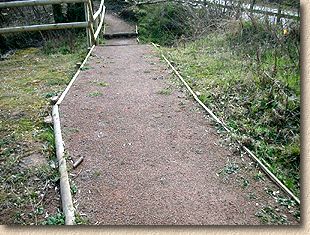 Another great advantage of self-binding gravels is that it's immune to the disgusting habit of spitting out chewing gum. This filthy display of low manners has blighted the paving of every village, town and city in these islands, but the gum just cannot adhere to the loose, dusty surface of the gravels, and so it is soon lost, usually by sticking to the sole of some poor sod's shoes. Personally, I think we should be allowed to birch those found guilty of spitting out gum onto a public pavement: not just because it's a nasty, foul, germ-spreading and disgusting thing to do, but also because it ruins so many wonderful pavements.

The downside of this is that the surface is loose, and will be picked up and carried on the soles of shoes. Therefore it's essential that some form of matting or grating is provided at thresholds to prevent the material being carried indoors, especially where laminate or wooden flooring is present.

There are many locally sourced and produced SBGs throughout Britain and Ireland, many of which rarely travel more than a dozen miles from the quarry and may well have local names, but there are a few 'brands' that have attained a more widespread distribution and a few of these are listed below: