The 2005 External Works Exhibition (EWx) took place last week at Birmingham's NEC and judging from the feedback I received from exhibitors and visitors it was a rip-roaring success. The show ran for three days, Tuesday 19th to Thursday 21st, and almost without exception, every exhibitor told me Tuesday had been great, up until 3pm when it quietened down a bit, Wednesday was superb, and Thursday picked up where Wednesday left off.

Having spent a couple of days there, I have to agree that this really was one of the best exhibitions I've attended for years. The show is well-focused, targeted pretty accurately at hardscapes, streetscapes and the hard-landscaping trade in general, and there was a pretty eclectic and comprehensive mix of paving, with street furniture, playground kit, alternative surfacings, and even a bit of decking, but I skirted past that fairly sharpish, you'll be relieved to hear!

One thing that was noticeable was the absence of any of the "big" players in the industry – no Marshalls, none of the Agg Industries brands (Bradstone, Charcon, Border Stone, et al), no RMC, and no clay pavers from the likes of Blockleys or Baggeridge, but I noticed one or two of their people knocking about, and chatted to a couple who were as impressed as I at the high level of interest from visitors, and the breadth and depth of exhibitors, so maybe 2007 will see them break their duck, as it were.

An innovation at this year's event was the provision of two seminar theatres, featuring a wide selection of speakers and subjects. I attended two: the first was presented by Interpave and was, not to put too fine a point on it, a 30 minute trumpet-blowing exercise, devoted to plugging the various Interpave publications, the website, the downloadable PDFs, etc. There's nowt wrong with a bit of trumpet-blowing now and again, but I thought it was strange that while Interpave were willing to put up a speaker, only one of their member companies could be bothered exhibiting at the show.

The second seminar was a double act between Michael Heap, top bod at CED, and the well-respected Stein-Tec Technical Director, David Burton, and between the two of them they looked at the history, development, improvements and future of stone paving for vehicular areas. Regular readers will know that stone paving is my first love, and I was enthralled to sit back and listen to two other aficionados talking about it, showing slides (pity about the lighting, though), and encouraging the assembled young designers and borough engineers to re-think their attitude to stone for paving, and to put a bit of extra thought into the jointing materials, which is far more important than many people think. 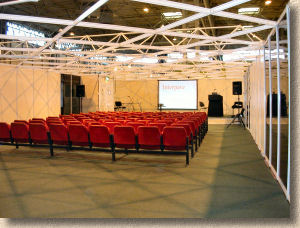 Enough of listening - on to what there was to see. I'll group together similar products to make it easier to find those bits that might interest you, and we'll start with concrete paving.

Only two manufacturers put in an appearance, and one of these manufactures paving more as a sideline. Formpave have been staunch supporters of the External Works events over the past five years and their stand was always busy, proving that there is interest in concrete products. Regional Sales manager Steve Spikes reckons the richly textured Cornish range were probably the most popular item on show, with a lot of interest being shown in the reddish Royal Deeside colour launched last year. I loved this paver when I first saw it, and I still think it is a truly wonderful option for any of those areas where Old (or new!) Red Sandstone is the predominant rock. The Aquapave range of permeable paving was also attracting a lot of attention as more and more designers and local authorities face up to their responsibilities for sustainability and SUDS. Steve gave me a sneak preview of a couple of exciting developments that Formpave will be unleashing over the next few weeks. I'm sworn to secrecy, but as soon as the white smoke emanates from the Formpave rooftop in Gloucestershire, the news will be announced here.

Townscape are probably better known for street furniture than paving, but they do manufacture a range of flags and a corner of their larger, centrally located stand was given over to a small selection. However, what really caught my eye was an exposed aggregate tree surround they've named as the "Quad 900". They told me it is usually manufactured in plain concrete, and I had to admit that, as such, I would probably not have given it a second glance, but the attractive exposed Cornish granite really does make it stand out. I think I upset one of the directors when she asked for my opinion of Interpave and Interlay. The notorious McCormack forthright opinion – that in their current form both organisations are a waste of food and do nothing to promote best practice in the trade – did not seem to go down to well, the conversation was cut dead in its tracks, and away she marched.

I struggled to warm to Townscape at this show. Firstly, they didn't want me taking photographs of their products in case I passed them on to a competitor (so why put the bloody things on public display in the first place???) and then the manner in which all further conversation was cut off when I criticised the Interpave/Interlay set-up annoyed me. Would they prefer I lie and pretend that all is wonderful with Interpave and Interlay? Are they unable to accept constructive criticism? Are they too grand and self-important to listen to what a lot of average contractors are saying?

In contrast, many of the stone paving suppliers couldn't have been chattier, more accommodating and generally happier to see me without dancing a jig and cracking open the whiskey. None objected to photographs – a couple even re-arranged items to make for a better image, and without exception, everyone of them was quite happy to have the craic, to chat about their stock, the problems facing the trade, and what they see as the trends for the coming couple of years.

Hardscape from Bolton were exhibiting at EWx for the first time and had a stylish stand that mainly featured two very attractive Chinese granites. A central diamond of “Magma Buff”, a wonderful bronze-tinged stone surrounded by a dappled black and white granite they've named “Metallica Pearl”. Both are available ex-stock for around 30 quid per square metre for 50mm thick pieces. Samples of other stones and paving materials were dotted around the spacious stand, and included a polished, exposed aggregate block paver from Holland and a resin-based 'tile' that can be created to incorporate motifs, logos or anything else that takes your fancy! 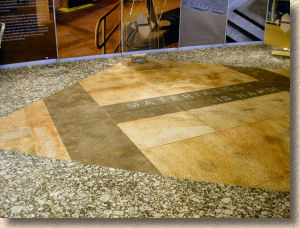 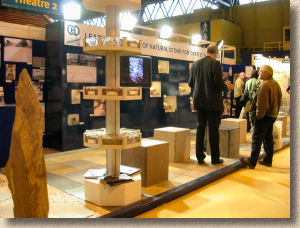 Around the corner, CED had a stand paved with over 30 different types of flagstones, including granites, porphyries, yorkstones, limestones, flame-textured Welsh slate (Blaenau and Penrhyn), and the intriguing 'Alta' stone that is surprisingly flexible. I found it refreshing to see such contrasting stones juxtaposed in this way, and it worked surprisingly well – so well, in fact, that one visitor actually wanted to replicate the effect on his own project! They brought along a number of large granite cubes that can be used as bum rests or bollards. Each is around 450x450x450mm so, if used for a streetscape, they can't be used as 'ammo' when the local hostelries empty. They have a fine finish making them comfortable but not too slippery, and they'd be equally at home on a patio or a boulevard. They did tell me the price, but I've forgotten it completely – I remember thinking it seemed very reasonable.

Pomery Stone had a similarly wide selection of stone, but mounted on stands. There was a hatched dark blue-black limestone from Vietnam that was also available in a bush-hammered finish, and a lovely dark porphyry, but what really caught my eye was a kerb, cut from a dark Portuguese granite and given a fair-picked finish. They tell me it's referred to as “SO7 blue-black” and sells for around 18 quid per linear metre for the 150x150mm size. Look at the delicious mitre detailing of the little setts at the rear of the kerb. You don't see that standard of work often enough, and the yellow-buff colour contrasts perfectly with the exquisite kerb. Those 45º return units make you want to create parking bays just so that you get a chance to use them! 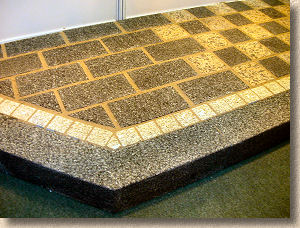 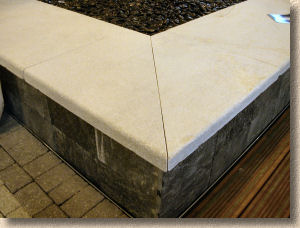 The final stone display links us neatly into the next section, as were sharing a stand with their sister company, , recently set up to distribute and sell a polyurethane jointing system – more of that in a minute. Palladio offered a generous selection of stone that you don't see too often. I was impressed with a dark red sedimentary rock, available as setts, that is as near a match to the reddy-purple setts of Bath, Bristol and the Chilterns as I've ever seen. Palladio also provided the coping stone for the central water feature in “The Square”, a showcase-cum-rest area slap bang in the middle of the hall cleverly designed by Martin Kelly of Lovejoy Landscape Architects. Again, look at the precision of this mitre cut – nothing short of superb! 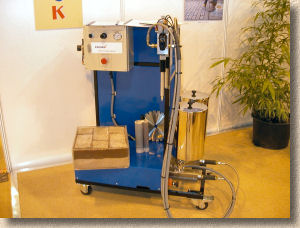 Alastair Macrae told me that although the cost of jointing may seem high, this is partly offset by savings made on bedding materials, and they can guarantee there will be no failure. Of even more relevance to many highway authorities is the ability to re-open and traffic a repaired or even a newly laid sett pavement in just two hours! This system will not be suitable for every project: it's serious over-engineering for drives or light use accessways, but for very busy town and city centre pavements that experience exceptional traffic loads, it could be the product many borough engineers been looking for.

Easipoint also have a new sett jointing product – Granatech. It's a little bit grittier and intended to be spread over the setts as a slurry, and brushed into the joints. There's two colours at the moment: a granite grey and a sort of yorkstone buffy-yellow. Such was the level of interest that all the data sheets for the new 'jollop' were gone, but Sales Manager Arthur McNiven has promised to get one to me as soon as poss.

Other news from Easipoint is that they've moved. They're still in Chorley, and the contact numbers are still the same, but they now have a new HQ at Restoration House on Drumhead Road on Chorley North Industrial Estate.

Just across the aisle were Instarmac with their Ultracrete jointing and bedding jollops. They'd constructed a clever cross-section sample of a sett pavement to show the bedding and jointing components, and were running regular demonstrations to show how quick and easy it can be to use Ultracrete. These demos attracted sizable crowds, and within an hour of being jointed, the trial setts were firmly held by the jointing and after 150 minutes (2.5 hours) the joints were firm, dry and incredibly solid. The fact that around one in three visitors to the show could be seen wandering around with an Instarmac carrier bag attested to the persuasive power of a live demo. 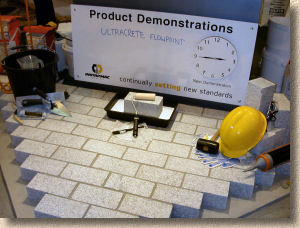 Part II of this review