Recess tray covers are used within paved area to disguise the presence of manholes,and access covers. This page offers an overview of the many types available and provides links to follow-on pages covering construction and maintenance.

Within an area of decorative, coloured or natural stone paving, Recess Tray Covers,, sometimes referred to as "Inset covers", are invaluable, especially compared against the utilitarian covers commonly used in modern construction.

They typically consist of two parts; the frame, which is fitted over the manhole, and the tray, which sits inside the frame and is filled with paving to match the surrounding area. The most common size used on domestic driveways and patios is 450x600x90mm, although other sizes are available, usually by order, up to quite large, say 3m x 1m plan size, as used by utility companies on public highways. These larger covers often use 2 or more separate trays within the one frame to keep the weight of the paved tray manageable.

Those used for public areas or commercial projects typically comprise a galvanised steel frame with a galvanised steel tray, while those for light-use, such as on residential driveways, may use a plastic frame. Developments in plastic moulding technology have also made it possible to have plastic trays for driveway/footway use.

The European Standard (BS EN 124), brought in to replace BS497, does not include fabricated steel manhole covers, although there is a Trade Organisation ( FACTA ) that attempts to bring some standards into the industry. However, the welding and galvanising of these covers are within the scope of two British Standards - all welds should comply with BS4872, and galvanising should be to BS729.

For foot traffic only, a grade 'A' cover is acceptable, but for driveways, a grade 'AA' cover, with a safe working load minimum of 1.5 tonnes should be used.

For driveways with large 4x4s or vans etc, consider using a class B cover.

As mentioned previously, many recess trays for residential applications (what might be thought of as Class A or Class AA in the table above) are now manufactured in plastic. There are obvious benefits in terms of weight and manufacturing costs, and we are beginning to notice that there are fewer incidences of trays becoming jammed . However, some contractors are unimpressed that some trays (and frames) may be more prone to deformation which affects installations and the aesthetics of the fitting when complete.

The move to plastic frames has enabled the development of 'Square to Round' recess tray covers, which are designed to provide a square or rectangular cover that fits over a round (circular) Inspection Chamber (IC) or Access Chamber (AC). This type of cover is considered much better for paving on residential driveways and patios, as the orthogonal shape makes cutting-in so much easier .

The whole point of recess tray covers is to make manholes and access covers less noticeable and to maintain the visual aesthetic of the paving. When they are correctly and professionally installed, they are barely noticeable, but in the wrong hands, they can become a weapon of mass distraction, as some of these photos make clear....

Fitting paving to a recess tray

As more and more of these recess covers are used, we have noticed that the tray has a tendency to become 'jammed' into the frame and held fast by jointing sand. To overcome this problem, we now recommend that the external edges of the tray and the internal faces of the frame are generously coated with a non-setting, thick lubricant, such as petroleum jelly, after final fixing. The jelly prevents sand grains from entering the gap between frame and tray, and makes removal of the tray that much easier.

Although recess tray covers are most commonly used with block or brick paving, there's no reason why they should not be used with any other form of paving: in fact, we feel they are a better choice when confronted by an access cover within an area of prestige or high-value paving. The photographs above show recess tray covers being used with stone paving , with concrete flags and within areas of mixed paving laid to complex patterns.

Whatever the paving or surfacing, the principle remains the same. 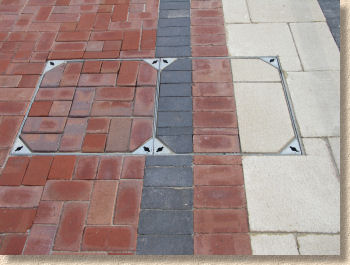 I get dozens of enquiries from Canada and its smaller southern neighbour, the USA, regarding these covers, which are apparently not easy to locate on that vast continent.

In Europe, recess trays are available from almost every Builders' Merchant/Provider, but in North America, they often need to be specially ordered.

I've found a reputable, reliable manufacturer and supplier of these covers. They are based in Lake Tahoe, Nevada, but have developed a distribution network via construction supply outlets that covers most of both countries.

Please contact them direct if you have any enquiries.