Boning Rods and Sight Rails are tools as old as time but still important and extremely useful when setting out paving and drainage projects. This page explains the simple concepts underpinning their use and shows how they are employed on real life sites.

The use of boning rods to establish levels is one of the very earliest construction technologies that is still in everyday use, thousands of years after they were used extensively on Sumerian and Ancient Egyptian building sites. The term 'boning rod' comes from and Old English term for a slope or gradient, a bone. It's one of those notions that's so simple, that it's hard to improve upon, and it's only the advent of cheap laser levels over the past few years that has seen this technique become less common.

The basic premise is that by establishing two fixed levels, it is a simple matter to use the line of sight to set any number of intermediate levels. The 'kit' consists of 3 T-shaped staffs that are typically identical, although when 'fixed' sight rails are used, the 'traveller' may be constructed to a specified length. Most paving and groundworks contractors will have a set of boning rods that they can use on successive jobs, but where a large number of levels are to be established, fixed sight rails may be preferred. 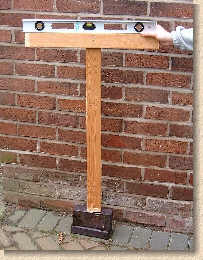 When using a set of 3 boning rods, one rod is set up at a specified height above a known level. Normally, some form of stable, temporary platform will be constructed from bricks or broken flagstones so that the top of the platform is set to the correct level. The boning rod is then simply stood atop the platform and held in position by an operative or a brace. Another rod is similarly set up at the next level point. It is essential that the cross-pieces of these rods are perfectly horizontal, and they should be checked with a spirit level before use. 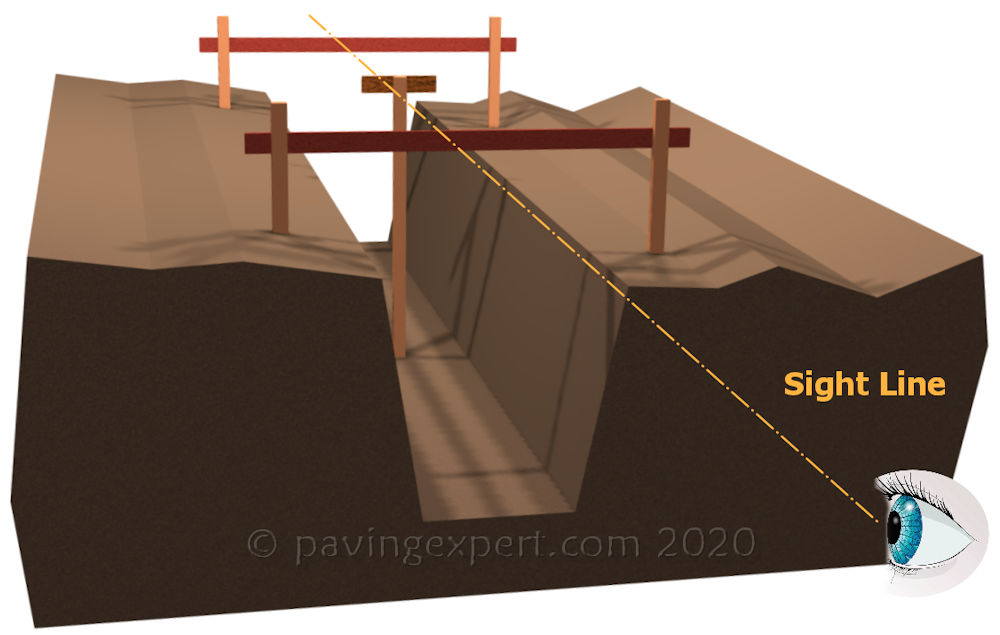 Boning-in is especially useful for excavations and trenches, as proper sight-rails can be set up in advance and a traveller constructed to guide excavation depth to whatever reduced level is required. For drainage projects, it's usual to have the sight-rails set up outside the excavation limits and up to 50m apart. A mechanical excavator can work its way along the line of the trench and rely on the banksman to use the traveller to test whether excavation depth is acceptable, too deep or not deep enough every few metres of linear excavation.

Boning rods in use on site:

Opposite: a backsight rod is set up by attaching it to a brace that will hold it erect on the surface of the existing road at the lower end of the excavation. 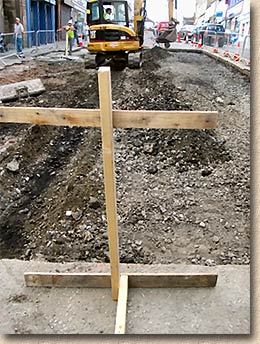 Sight-rails are often used when setting out house foundations, when they are sometimes known as 'Profile Boards'. These are established outside the limit of excavation, and always in pairs. They can then be used not only as sight-rails with a traveller to check on excavation depth, but also to set levels for top of concrete foundation, internal floor level, finished ground level, etc.

These Profile Boards are also used by the groundworker to establish foundation width, and by the Bricklayers when they come to start laying the masonry. A number of nails are knocked into the top of the Profile Board directly upon the relevant line to which it relates. The groundworker will use the centre line and foundation limits to guide the line of excavation, and use a Traveller with the Profile Boards to check the depth of the excavation. The Brickies will rely on the Building Line nails to guide their setting out, especially the positioning of corners.

Other uses of Sight-rails, Profile Boards and Travellers

These techniques are used in many areas of groundworks, such as gradient formation, trench cutting, area cut and re-grade and cutting/embankment batter.

This diagram below illustrates the use of double sight-rails to guide the excavation of a steady gradient trench through undulating ground.

Oblique sight-rails are used to guide the amount of batter used when creating an embankment or excavating a cutting. These sight-rails are usually placed outside the working area, but in a position such that they can give a quick confirmation that the work is as required.