A return visit to assess the jointing undertaken eight years previously at Hitchin Market Square in Hertfordshire. Has the original VDW 850 mortar managed to survive the regular battering it receives in the centre of a busy, bustling market town?

In association with NCC Streetscape

Resin Jointing Mortars for all applications

Way back in the autumn of 2009, exactly one month to the day before Christmas, when Cockermouth was flooding as the local river burst its banks and much of Britain and Ireland was hunching its shoulders to fend off the near incessant rain, NCC Streetscape undertook what was, at that point in time, one of their most challenging projects. Re-jointing a busy, bustling market square and getting it all up, running and open to the public again in time for the Christmas rush.

The market square in the centre of Hitchin, Hertfordshire , has a long and noteworthy history but, for too many years, it had been blighted by loose granite setts, which wobbled and rocked and came out when trafficked. In fact, it was so bad, it was actually deterring the local population from using it!

Oh yes! It had been patched and pointed and re-pointed and grouted and glued and all sorts over the years, but nothing lasted long. They might get a couple of years, but before you knew it, the setts were a rocking and rolling all over again.

Faced with the prospect of having to lift and re-lay the whole square, at huge cost, the local council undertook some tests and decided to have one last roll of the dice with what looked like a very promising product: VDW 850 resin jointing mortar as supplied in Britain and Ireland by NCC Streetscape.

Which is how, 8 years ago, I came to be stood out in the appalling weather watching the old jointing being blasted out by a high-pressure jet of water and then replaced by the slurry mortar VDW 850.

Eight years on, I decided to return to Hitchin and see for myself how it had all turned out.

The first thing to note is that its still there! Over the years Ive looked at paving and jointing projects that have all but disappeared in under 5 years, due to them being poorly designed or poorly installed or just being the wrong materials in the wrong place at the wrong time. No such problem with the VDW 850 though!

Eight years have passed, eight cold, wet winters and eight long, hot (occasionally!) summers, yet the whole market square looks as though it was re-jointed only last year. Im pleasantly surprised at just how good it all looks! 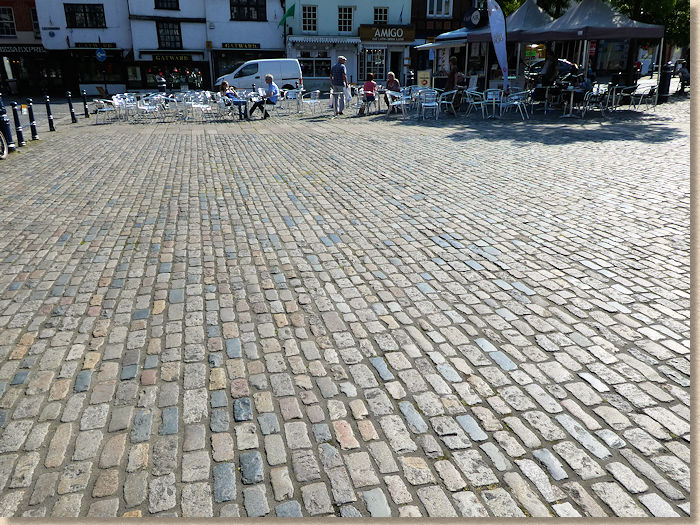 Back in 2009, I shivered as the rain drizzled down the back of my neck and the cold seeped in beneath my thermals, but here, in 2017, we have a pavement café, we have people sat out in the sunshine, making the most of the weather and, more to the point, making the most of an eminently usable and people-friendly sett pavement smack bang in the centre of town.

Yes, there are one or two weeds that have somehow managed to find a tiny crack to exploit, but they genuinely are one or two  very few and far between. Well over 99% of the surface is pristine. Not a weed to be seen, not a crack to be found, not even a few loose setts where market traders vans have rumbled on and off twice week for the general sales, plus the bric-a-brac and car boot sales held on Fridays and Sundays.

The granite sett pavement is regularly hosed down with high pressure jets to wash away the dirt and detritus of a busy and important produce market, yet the jointing remains completely unfazed and intact.

No matter where you look within the market square, the setts are no longer a hazard, the jointing hasnt fallen apart nor been washed away, and the entire pavement surface is in near perfect condition.

See the original installation as it took place back in 2009