Terracing is simply a way of creating wide steps on a gentle gradient. Using a wide variety of materials, this page aims to introduce the basic principles and techniques.

Terraces can be used simply as steps , or can be used to re-shape the land profile to make it more amenable to gardening or landscaping.

Almost any materials can be used to create terracing; natural stone, roadkerbs , flags-on-edge , railway sleepers, fence base panels, gabions (wire baskets filled with local stone) or one of the many proprietary systems available from various manufacturers. Anything that is capable of providing some upstand whilst being firmly anchored to the ground beneath is suitable for the riser. The tread can be any form of paving, hardstanding or plain bare earth for planting.

Illustrated below, are a few of the simpler methods. Most terracing solutions will be a variation on one of these methods.

The diagram opposite shows timber terracing relying on steel pins to anchor the treated timber planks. Steel road pins, or lengths of 12mm diameter or greater reinforcement bar (rebar), approximately 750mm long, can be used to secure the planking or, alternatively, wooden stakes could be used, provided they have at least 300mm driven into the ground beneath.

The concrete slotted fence posts used in this construction need to be sunk into the ground by at least 450mm and concreted in place. The base panels should be laid level across the top. See Fences for further details of concreting in fence posts.

This construction is only suitable to a maximum height of 2 panels (600mm).

Bagwork is one of the simplest retainer and/or terracing structures, it is normally used as a revetment to alleviate scour by watercourses, but it is eminently suitable for low retaining structures.

It consists of hessian or polypropylene sandbags, which are filled with a dry or semi-dry concrete, stacked in courses, with each successive course stepped back slightly from the underlying course to create a batter of 5° to 15°. The bottom 'starter' course may be laid on a concrete foundation if conditions warrant it.

Once the concrete within the bags has set, it forms a reasonably solid wall, and it is of no consequence if the bags themselves eventually rot away.

Gabions are best thought of as large, wire baskets that are filled with a local stone and linked together to form terracing, retain river banks, support earth banks and limitless other uses in the civil engineering field.

The 'baskets' come in a variety of dimensions, generally 1m wide x 1m deep x 1-4m long, and a selection of mesh sizes to suit the various applications. They are relatively cheap, at £30-£50 each and by using local random stone, generally in chunks 100-200mm, and being very simple to install, the cost is kept to a minimum, and the finished result is aesthetically pleasing.

The gabions can be 'stacked' to create structures up to around 10m high. The bottom gabions are placed, wired together and filled with stone, before wiring on the 'lids' and positioning the next course, stepped back from the face of the lower course by 100-300mm.

The 'natural' look of gabions, compared to, say, reinforced concrete, make them a most attractive alternative for many schemes, such as the river bank erosion control project shown opposite. 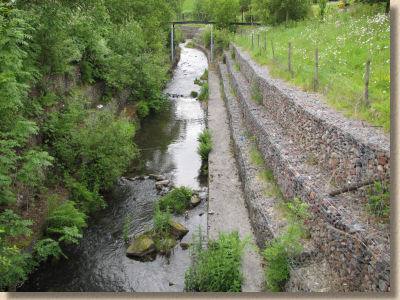 Further, more extensive coverage of gabions and their uses can now be found on a separate page

Although use of gabions is growing - we certainly see more of them nowadays than we did last century - they deserve wider recognition as one of the most cost-effective and versatile methods of creating vertical uplift and/or restraint. Few other walling or terracing materials work equally well on motorways, supermarket car parks and simple back gardens.

Suppliers of gabions can be found on the relevant Links page

This is a structure that's easy to build, costs next to nothing, and can look quite attractive in a garden setting. It uses broken flags/slabs stacked in courses and angled slightly back into the bank or raised bed being retained. The vertical joints between adjacent pieces are normally kept tight (butt-jointed) but it's possible to make wider joints occasionally, and to fill the 'gap' with a planting medium to allow cascading pants such as Aubrietia to brighten up the structure.

The base or starter course can be laid directly onto the sub-grade, assuming it's firm and stable, or it can be laid on a concrete bed, which is our preferred option. The pieces of broken flag should be at least 150mm wide for stability, but it is easier to use wider pieces, say 300mm wide at the base, and use sucessively narrower pieces as the wall rises.

This structure relies on being 'battered' ie, leaning back into the earth at an angle between 3° and 15° for its stability. There is no mortar jointing; the wall relies on gravity for its ability to retain the earth, and as such, is only suitable up to a height no greater than 1.2m. The vertical joints should be staggered, so that each piece is bridging at least 2 pieces in the course below.

The diagram opposite illustrates such a wall built from broken pieces of 50mm thick plain 'grey' concrete flags, but coloured flags can be used if preferred. Builders' Merchants may give away, free of charge, broken bits of flags, and they are sometimes available from the local coucil Highways Dept., or, of course, paving contractors replacing a nearby driveway. 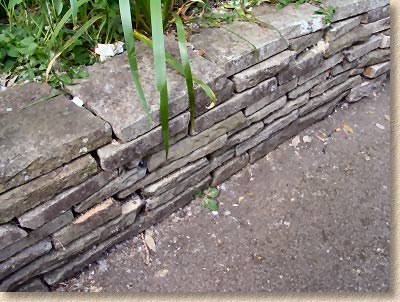 When constructed using broken yorkstone (or other stone) flags, the effect can be very naturalistic and highly effective, particularly for older properties or cottage gardens.

As long as each course uses pieces of the same thickness, construction is incredibly simple and the bed joints remain horizontal. Problems occur when flags of varying thickness are used within the same course. Although it is possible to build in this manner, the result is more higgledy-piggledy (some might say more realistic) but the amount of fiddling about involved is much greater.