It's the hottest day of the year, the height of the paving season, so sweltering that I can't even sit in the house, so I'm out in the garden and I'm writing a brochure review. Really? What's happened to the time at all? Aren't these brochure reviews supposed to be over and done with by Easter, leaving me free to focus on other matters (such as motorbiking!) over the course of a long, hot summer?

In theory, yes, but the number of brochures submitted for review increases each year and the time available to scrawl such reviews decreases, which is why I'm sacrificing what is allegedly Fathers' Day (remember me, oh fruit of my loins? I'm the one you only ever visit when you need baling out!) writing the umpteenth brochure review of 2017.

Now, that could be seen as a bad thing, but, in this case, it's actually a very good thing because the brochure precariously balanced on the arm of this deck chair is the very impressive Castacrete publication, and so what might have been a tedious chore turns out to be a genuine pleasure. 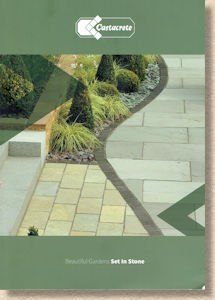 Castacrete originally made their name as a manufacturer and supplier of wet cast flagstones. You could probably have guessed that from the name, but since tempting the ever versatile Gary Sergeant to their ranks a few years back, they have grown to become a serious contender in the supply of imported stone paving.

The contents/index page, right at the front, is decorated with a full page image of imported sandstone paving, complete with nasty crossed joint, but they've not completely abandoned their origins and the brochure gives pride of place, leading the full roster of contents to their range of concrete paving, which they dub as 'manufactured' products. This encompasses the range of wet-cast and pressed concrete flagstones and pavers, as well as walling blocks of various types.

The wet-cast flagstone options cover the three basic groupings: budget, mid-price, and premium, and there's a good selection of colours. Sizes are based on a 150mm module but there's no sign of anything bigger than 600x600mm. Pressed flagstones, similarly, cover three basic groups: smooth, riven-effect, and textured, with somewhat more limited colour options but the same maximum size of 600x600mm. Walling, unsurprisingly, has three groups: tumbled, pitch-faced, and split. The tumbled offers multi-toned options but the split and pitched are available in just two shades of buff.

Concrete block paving follows and here we are offered, can you guess? Three basic formats: standard 200x100mmx50mm, a selection of larger-format tumbled blocks, and a larger format 'pencil-edge' option for those applications where low-rumble is desirable. All are 50mm thick, so only really suitable for Class IV pavements (residential patios and driveways). The colour options are what you'd expect, with single colours and multi-tonal in various hues.

No permeable option, and nothing for heavier applications, but maybe such products are more for the commercial market and, possibly, best left to the serious volume manufacturers.

A good range of supporting kerbs though, in low and high formats, with a full supporting cast of internal and external corner units (the internal bull-nose corner unit is illustrated with an internal chamfered unit, but I'm guessing this was a simple error). Colours are illustrated with swatches of block paving, rather than actual kerbs, and it has to be said that the standard 'charcoal' looks a completely different colour to the tumbled charcoal!

The concrete products cover all the basics but nothing exceptional or unique. It's a good, steady 'all-rounder' collection, but as such, it can't meet the tastes of everyone. The colours are all the well-established popular choices, and the sizes are familiar, but they don't address the current trend for larger formats. Something for 2018, perhaps?

Porcelain is, as we all know, the in-thing at the moment, and anyone looking to supply the residential paving market has to have a range available if they want to be taken seriously. Several of the second tier suppliers have looked to compete on price and sourced their porcelain from various far-flung corners of the world where costs are cheaper and, unfortunately, the quality is similarly lower. So bonus points to Castacrete for getting their premium porcelain from the one country that leads the world in this product group: Italy.

The pressure to go for a lower cost option weighs heavily on many smaller suppliers, and it can't have been an easy decision to put quality over cost, but when even the low-cost porcelain isn't really all that cheap (compared to imported sandstone, granite or limestone) it makes far more sense, to me at least, to go with the reassurance that comes with Italian porcelain.

It's a good selection, too, everything that needs to be there â€“ so stone and marble stylings, along with timber â€“ and none of the more exotic, experimental colours, patterns and textures that some suppliers seem to think will engender interest and sales (when the usual reaction is more typically disdain). And for those wanting to delve deeper into the possibilities with porcelain, may I recommend the standalone, A5 landscape brochure from Castacrete dedicated solely to their extensive collection, far more than what is shown in this 'overview' brochure.

On to natural stone, which, as mentioned at the outset, has become a strong card in Castacrete's hand over the last few years, and it has to be said straightaway that what's on offer is everything that ought to be in any collection wanting to be considered reasonably comprehensive and inspiring.

Naturally, some of the offerings are not to my liking: Mint and Teak are a costly way to fill a skip, in my opinion, but there's not just Castacrete offering these godawful stones, and, let's be realistic, there are enough fools out there buying this rubbish to persuade suppliers great and small to keep offering it. As I always say, it would be a poorer world if we all liked the same things. Variety is the spice of life, and while certain people will be happy with a dubious kebab, some of us prefer steak.

It's hard to pick out anything that's missing from this collection. All the popular imported sandstones are on parade, and in various formats: riven, sawn, tumbled, straight-edge, circles....the lot. Limestones too, and further bonus points for showing black limestone as it really is, ie, definitely not black!

The gallery of tumbled flagstones on page 88 all appear to be the same colour, with the exception of some banding in the tumbled Camel. Is this a limitation of the printing process or does the tumbling really remove any tonal variation?

There are setts, actually labelled as setts (further bonus points!), stone block paving, walling, and, to my immense patriotic pride, two classic Irish stones, the inimitable Donegal Quartzite and the grossly underused (in Britain) Irish Blue Limestone, which is so typical of countless rural midlands towns, and my own stomping ground in Co.Offaly. Jayz! How many bonus points are we on now? Into three figures, probably!

Finally, a reasonable, if typical, assortment of decorative aggregates. It looks and feels like an 'add-on' staple to the last few pages of the brochure, and, with no disrespect intended, that is probably the truth. Stockists like to have just the one supplier for all their hard-landscaping, so if a supplier can provide deco aggs as well as paving and walling, that makes their offer that much more appealing to a stockist.

So, what about the brochure itself? Well, it's chunky enough to be taken seriously. 140 full colour, A4 pages makes its mark and it has the appearance of hailing from a quality supplier. It certainly wouldn't be out of place amongst the output from some of the big boys, and, given the budget limitations that have to be in place with any of the slightly smaller players, it's damned impressive.

The organisation within the brochure is highly logical with none of the marketing bollocks that blights so many others, gathering products into arbitrary groups and giving them meaningless names such as 'contemporary' or 'arty-farty'. 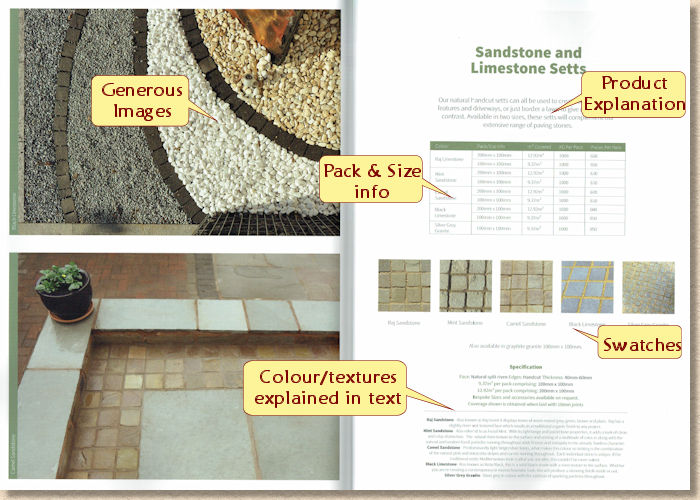 The layout is simple, too, with an ample explanation of each product, supported by plenty of images, very few less than half a page, and, often, a good text description of the colours to enhance the supporting photographs. The swatches are probably a bit too small, and, as noted earlier, some swatches are either inapplicable to the product under discussion or vary so much that they are practically meaningless.

If I have to find fault, and It's intended as constructive criticism rather than nit-picking, I would urge keener assessment of some of the photographs. I know it's a natural phenomenon, affecting all manufacturers, and it's not actually detrimental to the paving, but efflorescence in photies only ever serves to turn off potential customers. When a picture is intended for the brochure, make sure the flags or blocks or kerbs featured are clear of the damned stuff.

Also look at the workmanship with a hyper-critical eye. By no stretch of the imagination are Castacrete the only ones implicated, but too many publicity shots reveal poor workmanship or, even worse, examples of bad practice. Crossed joints are an indicator of an installer with no understanding of how pavements actually work, either historically or contemporarily. Poor cuts and wandering edges can make a perfectly fine paving product look shoddy or second-rate. Unlike me, many customers will not know it's bad workmanship, but their natural instinct will tell them there's summat they don't like about such-and-such an image, and the logical conclusion is that it must be the product itself.

Overall, and again I intend no disrespect whatsoever, but this is a brochure that is punching well above its weight. Castacrete may not be a nationally known or recognised brand, but you'd never guess that from leafing through this exceptionally impressive brochure. The product range is as comprehensive as any of those first tier suppliers considered to be the big boys, and, in some instances, it exceeds what they can offer. If this is a sign of how Castacrete intends to promote itself through 2017 and beyond, things can only get bigger and better for them, and that is something to be welcomed by anyone interested in hard-landscaping, whether they be an installer, a designer or a customer.