EasiHold is a simple resin-based spray-on resin binder for stabilising decorative gravels in the home and garden. It's not intended to carry vehicles, but it can easily cope with foot traffic and the like. Find out more....

In association with Vuba Resin Systems

While many resin suppliers have been busy developing ever-stringer, ever more resilient resin binders and multi-hued aggregate blends, one company based in East Yorkshire have looked at the burgeoning market for resin bound products from a slightly different angle and developed a special resin binder system that is actually not capable of carrying a Challenger Tank or withstand the blast force of the Space Shuttle.

Vuba Resin Systems have created EasiHold to provide a simple and easy-to-use spray-on resin binder that lightly fixes loose aggregate in place. Think of it as a basic glue that will hold in position small gravel or aggregate with sufficient strength to withstand foot traffic and other light use, and so prevent the annoyance of scattered stones and migrating gravel. It is not intended to be used for vehicles or heavier applications – its whole raison d’etre is to be a lightweight product that simplifies the resin bound process. 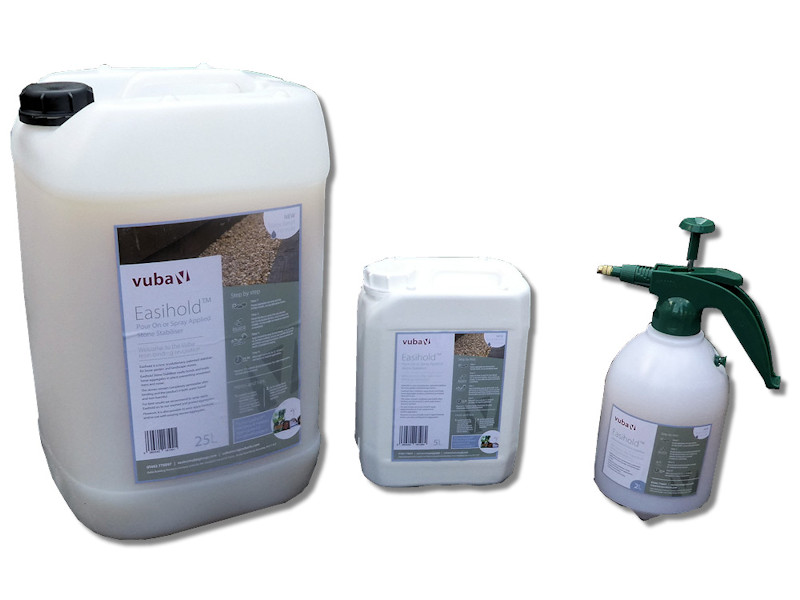 And key to this simplicity is the way that EasiHold is applied. Unlike conventional resin bound surfacing, the binder component, ie, the resin, is not pre-mixed with the selected aggregate, so there is no requirement of a forced action mixer, no need for messy cleaning solvents, no demand for specialist rakes, lutes, floats and spreaders. It’s so simple it can be used by homeowners, DIYers and gardeners with no complicated training.

Intricate gravel designs, such as the Zen-style garden shown above, can now be ‘frozen in time’, the detailed patterns bound together by Vuba EasiHold without it having the usual glossy look of full resin bound gravels.

It’s this simple: you will probably need to read this twice, because you’ll believe you missed something, but it really couldn’t be any simpler.

First, you spread the selected gravel or aggregate. Then you spray it with the EasiHold. Then…errr…that’s it! Job done. There is no more to do. C’est finis!

And if you think that sounds easy, Vuba make it even more of a doddle by selling 5 litre spray bottles of the EasiHold so there’s not even any need to decant from the larger 25 litre containers used on larger jobs.

Can it really be that easy? Well, as long as the instructions are followed and, absolutely critically, the correct type of aggregate is used, it genuinely is that simple. Spread the gravel, spray with the EasiHold, allow it to set, job finished.

On this project, there’s a small area of loose gravel outside the kitchen door of a semi-rural property. It’s nothing grand or particularly special. It measures about 10 square metres and there’s a handful of flagstones set into the gravel to make it safer and easier for the homeowners, their children, and the family pets to enter and leave the building via that kitchen door.

The problem is, however, that the gravel keeps wandering off. The loose gravel gets scuffed and scattered, kicked up by the dogs rushing in and out, walked into the house via the soles of wellies and boots, lost into the adjacent lawns as the mower hovers over, and it has become, not to put too fine a point on it, a damned nuisance.

The homeowners are reluctant to do away with the look and feel of gravel by having the area paved solidly with, say, flags or setts, only to have them go green with algae and need regular washing down to swill away dirt, while the cost and inconvenience of a conventional resin bound surfacing seems barely justifiable.

Cue EasiHold. EasiHold will lightly bind together a new decorative gravel, fix it so that it won’t scuff or scatter, hold it in place so it won’t be picked up on the soles of shoes, boots and wellies, prevent it being lost to the lawn when the mower passes by.

Note that a new decorative gravel is being used. This is essential. The old gravel is dirty, it’s mixed with leaf litter and garden detritus and mud and who-knows-what other crud. It’s also damp which would inhibit the ability of EasiHold to work its magic.

The first job is to get rid of the old gravel, scrape it out with a shovel and find another use for it, or get rid of it altogether. This is an easy task taking just a few minutes on a small area such as this, and the rejected, dirty, contaminated gravel is barrowed away.

An old geotextile found beneath the gravel seems to have been a waste of time. It’s mostly degraded; it rips too easily as it is pulled up; and the sub-grade (the ground beneath) has managed to work its way through. This is because it’s the wrong geo-synthetic for that application. Some eejit has used a completely useless landscape fabric instead of a proper construction grade geo-textile, and that’s why it has failed. Wrong product in the wrong place.

The area is now cleared - all that grotty gravel and lousy landscape fabric has been shifted and the new decorative aggregate can be placed.

There is a wide choice of suitable aggregates, shingles and gravels, with guidance and advice readily available from the Vuba Technical Support people, but for this project, the homeowners have chosen a super-cool looking 6mm steel-blue marble, exclusively available through Vuba.

Where the decorative aggregate is being placed over a bare sub-grade, a construction grade geo-textile could be laid before the gravel is placed – it’s not essential but it will prevent any mud or dirt ‘pumping up’ from beneath and discolouring the gravel in months to come.

On this project, there’s an old concrete base beneath. It’s in less-than-brilliant condition, but it’s suitable as a base for a bound aggregate.

Note: laying loose, that is *unbound*, gravel or small aggregate over a hard base is never a good idea. Read the FAQ to find out more. This project is using, or will be using, a *bound* gravel, so laying over a form base is acceptable.

The marble aggregate comes in 25kg bags, with each bag covering approximately 0.25m² at a depth of roughly 30mm (4 bags @ 25kg per square metre). Bags are emptied into a Gorilla Tub before being carried into the working area – the bags could be emptied directly where needed, but this installer prefers to work with the Gorilla Tubs.

When several bags/tubs have been placed, a rake is used to spread and level the aggregate, covering the base, and fillings the gaps between the stepping stone flags. This could be done using a shovel or a squeegee, whatever is available, but the principle remains the same: the aggregate is spread and levelled-out to give a regular, even and smooth-ish surface. The operative on this project uses a float to ensure a perfectly smooth finish.

More aggregate is placed, spread and levelled, until the whole area is covered and the surface is deemed to be suitably even and regular.

The next step is to apply the EasiHold, but those stepping stone flags and the ground-level light fittings need to be masked off to prevent the EasiHold Resin covering their upper surface.

This masking off is achieved using discarded aggregate bags and gaffer tape. It could be done before the aggregate is placed, if preferred, but this installer determined that there was a greater risk of the masking being disturbed or dislodged during the spreading and levelling phase, so chose to fit the masking once most of the gravel was in position and then tidy any minor disturbance to the aggregate before proceeding with the binder.

So: flags masked-off, gravel in place, all that’s needed now is the EasiHold binder.

EasiHold comes as a liquid in 1 litre ready-filled sprayers, in 5 litre canisters or 25 litre drums.

The 1 litre sprayers are ready-to-use without any further preparatory work. When working with the larger containers, a required amount of the EasiHold liquid resin can be decanted into a simple sprayer or a basic watering can, topped-up as and when necessary.

Note how a sheet of heavy-duty polythene has been laid down over the preparation area just in case of any spills or splashes. This will help minimise the risk of any accidental staining of the flagstones beneath with the EasiHold resin.

For those preferring to use a watering can, ensure there is a fine rose head fitted to the spout before applying. It’s then a simple task of pouring some of the ready-to-use EasiHold resin into the can before applying it to the gravelled surface.

When applying the EasiHold resin from a watering can with rose, take care to prevent the EasiHold splashing onto walls, or adjacent surfaces. Keep the can moving, applying sufficient EasiHold to fully cover and coat the stones.

Many professional installers prefer to use a sprayer to ensure more even coverage. It’s not critical – perfectly acceptable results can be achieved using the watering can, but a sprayer offers a slightly greater degree of control.

As with the can, EasiHold resin is decanted from a larger container into the sprayer bottle, the cap fastened down, and then pumped to generate the internal pressure which forces the resin out through the spray nozzle.

The EasiHold is sprayed directly onto the placed aggregate, once again taking care to avoid spraying onto walls or adjacent surfaces. Aim for full and completely cover, with every square millimetre of the gravel doused with the EasiHold.

Over the first few minutes, the EasiHold resin will trickle down through the aggregate, spreading and coating every individual piece.

Coverage rates will, obviously, vary from aggregate to aggregate, and the overall depth of the coverage will impact, but, as a general guide, 1 litre of EasiHold will cover approximately two square metres of aggregate/gravel when applied by a sprayer, but probably closer to one square metre per litre when poured on via a watering can and rose. For those projects expecting a little more pedestrian traffic, allow for 2-3 litres per square metre.

It takes 12-16 hours for the EasiHold Resin to cure, faster in summer, slower in winter, as curing is affected by ambient temperature.

Vulnerable projects, those at risk of being disturbed by over-eager kids or excitable pets should be fenced off for the first 24 hours or so to prevent the still-curing surface being disturbed.

24 hours later, the EasiHold has cured sufficiently to take careful foot traffic, and a couple of days later, it will stand up to walking, running, children, dogs and everyday pedestrian traffic. It’s even strong enough to cope with the occasional over-run by the lawn mower.

But no more loose gravel, no more stones being walked-in to the kitchen, no errant stones being perilously flicked up by the mower….and all thanks to the versatile EasiHold Resin from Vuba. 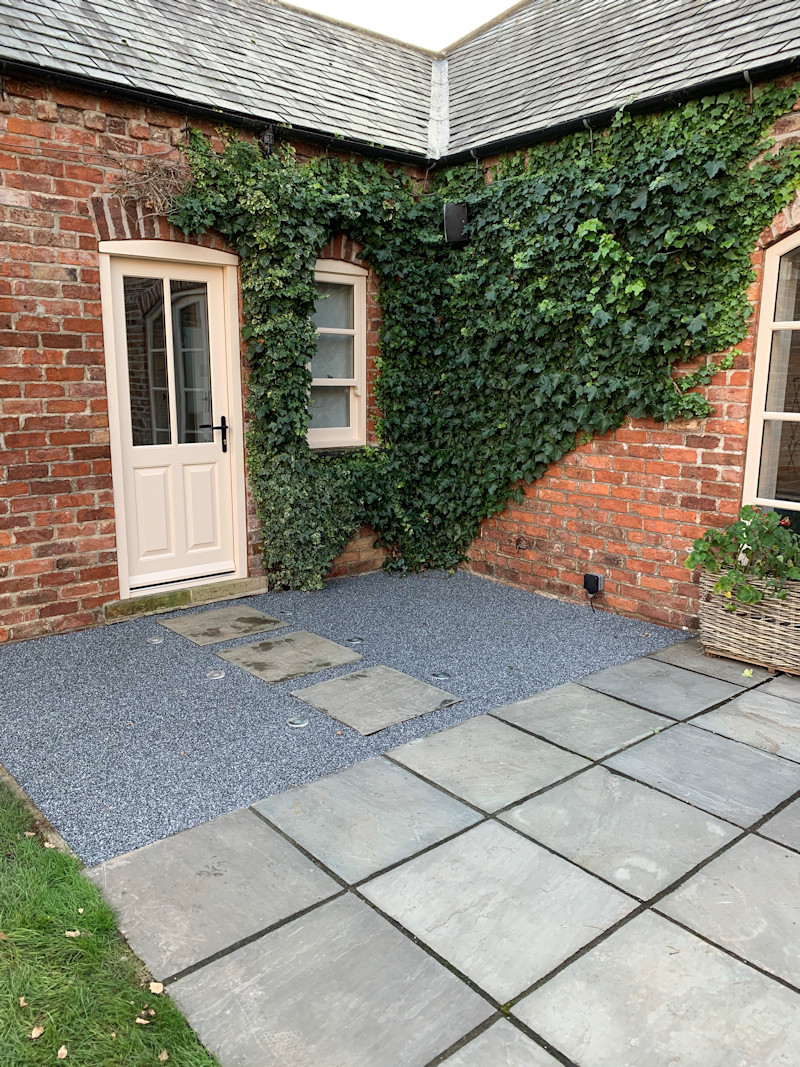 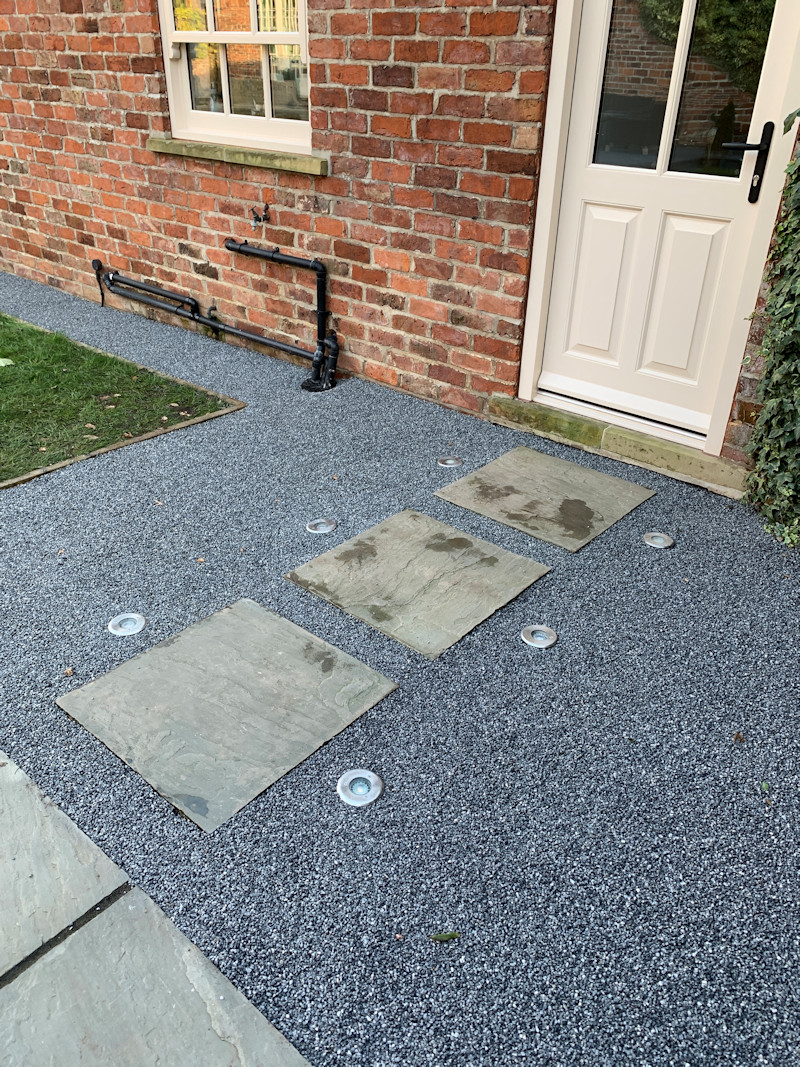 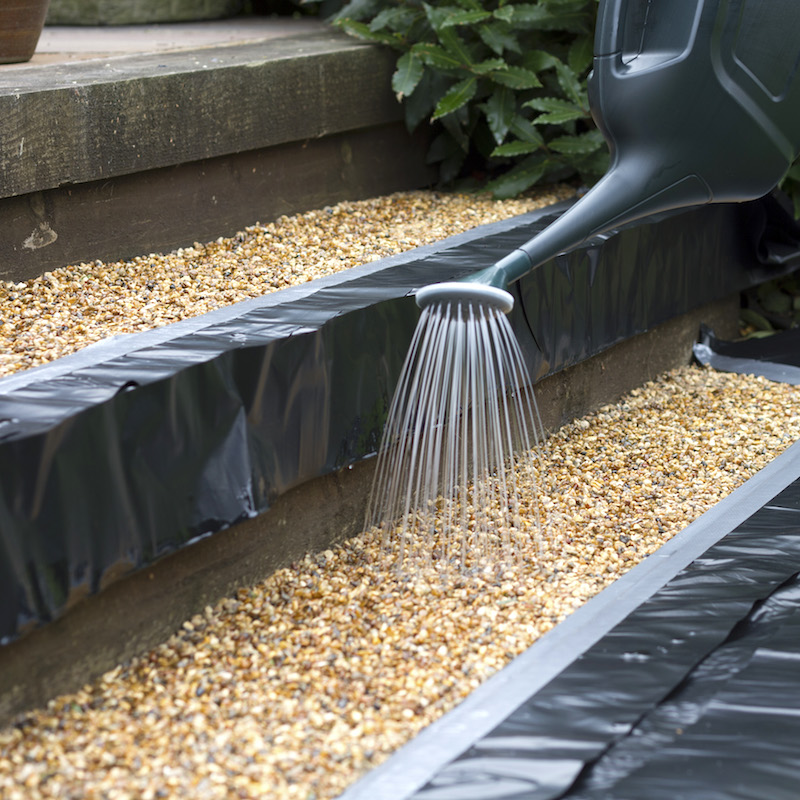 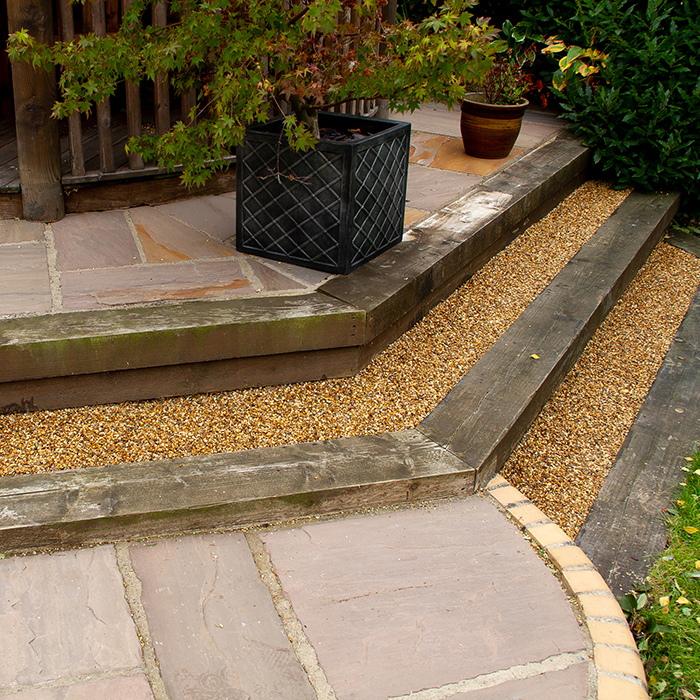 Vuba Resins produce a wide range of resin surfacing products and accessories, including vehicular-grade resin bound surfacing, internal flooring and much, much more.