One of the quieter news stories from last year regarded the acquisition of Scotland's premier block paving manufacturer, Paver Systems of Carluke, by one of Britain's leading wet-cast manufacturers, Stonemarket . It was mentioned at Glee last September , but there was no great hue and cry about it. It was all very understated and matter-of-fact. Then all went quiet, and it's only last week that a copy of the new Paver Systems/Stonemarket brochure, entitled “Inspirations” landed on my desk with a note asking me to take a look.

The first thing to notice is that the Paver Systems brand has been retained, although it is now sub-titled as “A Stonemarket Business”. I suppose this makes sense, as Paver Systems is a strong brand in Scotland and, for the time being at least, the products will only be available up there. A semi-cryptic reference in the note attached to the brochure suggests that the products will be made available throughout the country at a later date, but nothing is promised. 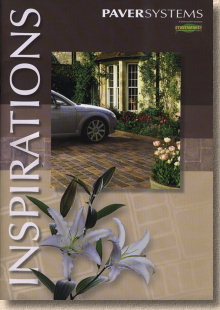 It's 3 years since the last Paver Systems brochure, and this offering is a huge leap forward in style, content and also in confidence. It has the look of a serious brand – not that the old PS didn't, but this 36-page full-colour brochure looks and feels more like the sort of thing you'd expect from a medium-sized manufacturer with national aspirations.

The brochure follows a logical sequence, starting with the paving blocks, a couple of pages for walling products, the technical gubbins, and finishing off with a plug for the Stonemarket range, which will be distributed throughout Scotland by Paver Systems. While many Scottish contractors (and DIYers) will be familiar with most of the Paver Systems range, the products are largely unfamiliar to those of us further south or across the water, so I'll include a brief description of each major product, but I strongly recommend you apply for your own copy of the brochure so you can judge for yourselves.

– four sizes, seven colours including four which are new (Amber, Ebony, Ivory and Tortoiseshell). This block has a moulded upper face, not unlike that of the Marshalls' Elite, although I've always thought the Embossed had a more distinctive texture with softly rounded corners and gentle arisses.

These are a 60mm block, so fine for use on drives, paths, patios or even certain commercial projects, if the whim takes you. As seems to be the growing trend, all four sizes are supplied in a single pack, which is all well and good for straightforward coursed designs, but as a contractor, I'd prefer to have control over the sizes available and the ability to order individual sizes would be a real boon. What if you fancy, say, a herringbone pattern, or if you want to have an edge course laid as soldiers? Multi-size packs are not best suited to this way of working, but as I say, the trend amongst many manufacturers seems to be to make life as easy as possible for the stockists and sod the poor owld sod that has to lay them! 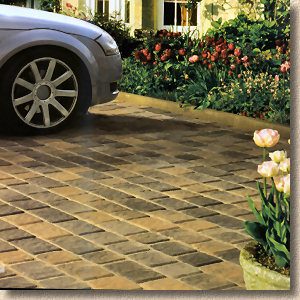 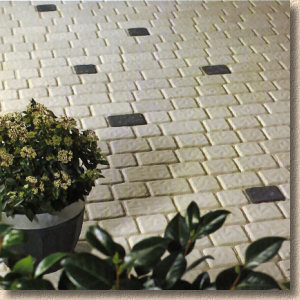 I'm not sure about the Ivory colour: it's very white, and I suspect it'll show up every hint of a tyre mark. It would be fine as a detail, or possibly as an edge course, but for the main body paving? I would like to see a driveway/patio laid in Ivory that is 12 months old, and see if it's still as pristine as the client hoped.

However, the Embossed range is the “Chef's Special” on the Paver Systems menu, and innovation with colour should always be encouraged. It's only by putting products such as these into the market that we will find out whether they suit the palate of the discerning Scots or whether they must be consigned to the swill bin. 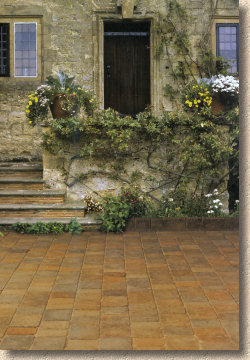 a fairly typical tumbled block in three sizes and a generous palette of six colours, including two that are new: Maraville (don't ask me! I don't know where they get these bloody names from! Leftovers from the paint industry, probably!), which is tan and brown multi, while Rosso has more reddish tones that will work well in the south-west of Scotland with the local Old Red Sandstone.

Tumbled blocks are much of a muchness and whether they will stand or fall depends on three characteristics: quality; colours; and price. The ongoing success of the Trident range suggests Paver Systems have got it about right. The provision of a matching circle kit, along with a complementary kerb (named Rubicon, but we'll cross that bridge when we get to it. Ouch!), combined with the ability to buy in packs of a single size all serve to reinforce the versatility of the range and ensure its continued popularity. Obviously, different colours will have more or less appeal in various quarters, but I really do like that Rosso and can see that being very popular further south.

They make 'em because the customers still buys 'em, and, to be brutally honest, they do represent the best all-round value for money in the block paving game. They've been around for 25 years and I'll bet they'll still be around 25 years from now, which only serves to prove that you can't hold back a good idea. There are all sorts of combinations and permutations, but a special bravery award goes to the owners of the driveway in this picture! 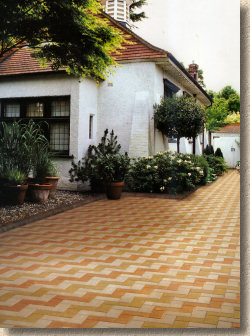 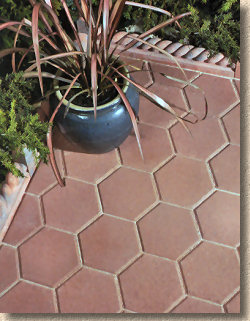 This format is reasonably popular in Europe and is one of the bigger sellers in the USA, but it has never really caught the imagination in these islands and I don't understand why. I appreciate that the hexagonal block that is most readily available in England and Wales is somewhat over-priced, but so are many of the other shapes and textures, yet they seem to sell in acceptable quantities. So what is it about the hexagon that we find difficult? Is it the regularity? The repetition? The uniformity? Surely that would appeal to some people.

I always think the hexagons are an “interesting” choice for pool areas, and the full interlock they provide makes them ideal for driveways, but they always seem to end up being used for patios and garden paths. Paver Systems' Hexagons are 50mm thick and come in three colours (Brindle, Red, Marigold). For me, the strong geometric pattern they create needs a contrast, which could be summat as simple as an edge course of 'standard' blocks. Laid on their own, the geometry over-powering, but then beauty is in the eye of the beholder, allegedly.

Talking about geometry, this new selection of shapes and sizes brings a whole new Euclidean world to the driveway or patio. There are three basic shapes that enable all sorts of intricate patterns to be formed. The Bishop's Hats can be used with standard blocks as 'starter units' for 45° layouts, but they can also be combined with the Lozenges and the two sizes of Squares to create visually distinctive layouts that work best with modern homes or contemporary courtyards. They really aren't for your country cottage or Victorian Mansion, although you can be sure some eejit will try it! 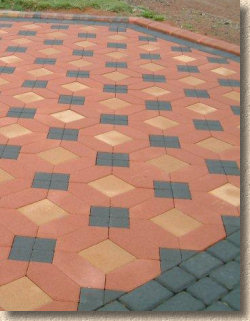 Nothing radical. A high kerb that's identical in shape, size and name to the famous KL, and low kerb with the stunningly original name of KS. As you'd expect, there are internal and external corner units, but no sign of a radial unit (not that they are ever really necessary). The aforementioned Rubicon kerb is a chunky tumbled block that comes in a mix of five sixes in the one pack, which brings us back to the question of choice. Although two dimensions are consistent (let's call them width and depth, 80mm and 160mm respectively), the variable lengths (80, 120, 160, 240 and 320mm) means that they can only be laid in two ways. However, I've figured out that they could be used as palisade edgings if the project happened to have suitable dimensions. I'm not sure whether I like the varying length: for me, concrete kerbs have always been regular sizes; it's the stone kerbs that varied. Maybe when I get a chance to see more of them, I'll come to appreciate the variation, but from this side of a computer screen, they look 'odd'.

yeah, yeah, yeah. Tumbled concrete walling blocks in two forms. The first emulates older, weatherworn clay bricks, while the second is a chunkier block, again named Rubicon, which is intended to complement the Trident tumbled pavings. Try as I might, I can't get excited by walling, and in particular, walling that matches the paving. I like a contrast, what more can I say?

Finally, there's a range of wet-cast products that feels as though it's been shoe-horned into the brochure. It's the only wet-cast item in the brochure, and it's been positioned in the middle of the technical info, in between the How To…and the Sizes & Colours info. And the name: . Wossat? Is it New York, as in the city that never sleeps, or is it intended to be New York, as in Yorkish stone look that is new? It's not easy to tell from photos, due to the limitations of the printing process, as they say in all these brochures, but the colouring looks yorkstone-ish and the texture is reminiscent of some of the coarser gritstones of North Lancashire, but it's hard to be certain. I haven't seen this product in the flesh, but I shall make a point of doing so over the coming months. 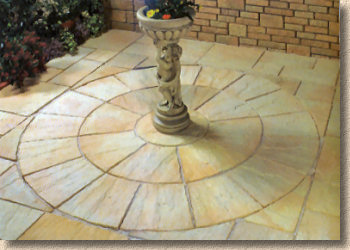 The tech info, the pattern guides and the How To is straightforward, clear and simple to understand. It's well laid out, other than the strange insertion of the “Newyork” stuff, and it's very easy to find the info you want, be it colour range, sizes or pack quantities.

Overall, it's a tidy brochure. No grinning “perfect life” models to annoy me, nothing too outlandish in the background properties, and a good selection of well considered photos. The thistle and the cross of St Andrew on the back cover will help the brand's identity as an essentially Scottish company, and the link-up with Stonemarket makes logistical sense, as the two companies complement each other perfectly. Obviously, having distribution limited to Scotland wil limit opportunity, but I look forward to seeing much more in the years to come and I do hope they eventually manage to get their products south of the border.