This page deals with the surface fittings commonly used to drain paved surfaces. The main type of fitting used for this purpose is known as a gully, although it is often incorrectly referred to as a 'grid' amongst the general public.

To be accurate, the 'grid' is actually the grating used to keep undesirables, such as litter, leaves and people, out of the gully, whilst allowing surface water easy passage to the drainage system.

Linear drains are becoming increasingly popular for pavement drainage and they are covered on a separate page .

Note that most new drainage points tend to be 'trapped', ie they have a water trap that prevents smells rising up from the existing sewers. This is mandatory for connections made to a Foul or Combined system, and is recommended for connections to Surface Water systems.

A drainage fitting which has an open top, a definite base, and an outlet to one or more sides of the body of the gully. 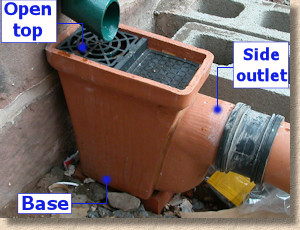 A drainage fitting with an open top and an open base, where the base opening is typically smaller than the top. 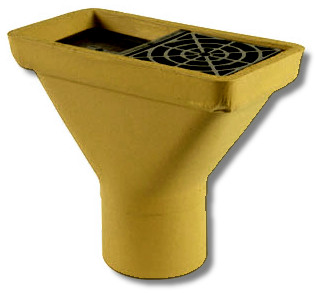 Often abbreviated to RWP on drainage drawings, is simply a drainage fitting that takes surface water from a roof downspout or collects surface water. It may be a gully , a hopper , or it might be a straightforward connection where a downspout from a roof is directly connected to the pipework. 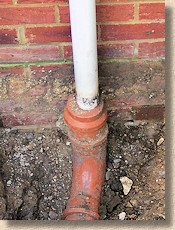 Usually abbreviated to KWP on drainage drawings, is a drainage fitting that collects waste or foul water from a kitchen sink, a dishwasher, washing machine or other outfall for grey water. It may be a gully , a hopper , or it might be a straightforward connection where a waste pipe is directly connected to the sub-surface drainage pipework. 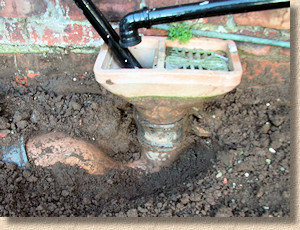 SVP, also known as a 'soil stack', or 'discharge stack', is a connection between the waste from a toilet and/or bathroom directly to the sub-surface drainage pipework with no opening to the external environment. These pipes are often vented (open to the air) at the top, well above the height of the toilet, to allow odours and sewer gases to vent safely. 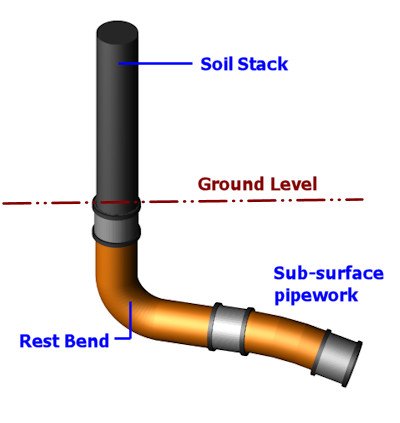 Note that each of the arrangements is sat upon a bed of concrete; this is done to ensure the top of the arrangement is maintained at the correct level (150mm below damp proof course, as shown) and will not settle into the sub-grade. In some fixings, a padstone may be used rather than 'fresh' concrete. Quite often, the padstone may be no more than a piece of broken flagstone or a concrete walling block.

Yard Gully - also known as a Bottle Gully, a Compact Gully or an Universal Gully. The larger versions, such as the one depicted above, may be termed 'Access Gully', if they permit rods to be inserted into the drain. Most gullies of this type are trapped, often by means of a baffle plate that is removable in some models.

P-trap and Hopper - this is a simple arrangement more commonly used with rainwater pick-ups (downspouts) than for draining large areas of paving. The hopper illustrated is a double type and it is possible to discharge the downspout directly into one side of it. This arrangement offers no access for rodding and must be directly connected to an access point or incorporate a rodding eye, as shown in the cross-section, to comply with Building regulations.

Rest bend and Hopper - this set-up is not trapped and is therefore only suitable for connection to a surface water system, not to a foul or combined system. A true rest bend incorporates a pair of fins at the base to help support the unit on a flat surface, but the same effect can be achieved with a plain 90° bend. A single hopper has been shown in this example, although a double or dished hopper might be used.

A Direct Connection - again, this uses a rest bend with an adaptor coupling used to connect the downspout directly to the sub-surface system. Arrangements such as this are indicative of a surface water system. They are easily dismantled and replaced with, say, a yard gully or a linear drain connection, if the drainage point is needed to help drain a pavement.

Road gullies are much larger than the smaller yard gullies illustrated above, but work in exactly the same way. They tend to have 150mm diameter outlets, rather than 100mm, and come in a variety of diameters and depths. Road gullies used within carriageways are typically used to drain an area not exceeding 250m²

Up until 30 years or so ago, road gullies tended to be large items of clayware, but their inherent fragility was always a problem. They were gradually replaced with pre-cast concrete units, which are much more robust but also much heavier. The larger 450mm diameter units weigh far more than a single operative can be reasonably expected to handle, and so they need to be craned into position by an excavator. Unless the positioning and levelling of the gully was right first time, subsequent adjustments were difficult, involving the craning-out of the unit and making necessary adjustments to the bedding concrete before craning the unit back into place.

Over the last few years, these heavy and cumbersome units have themselves been replaced by lightweight plastic units, that no longer provide the strength and resistance to deformation under load normally delivered by a clayware or pcc unit, but instead act as a liner mould for in-situ concrete casting. Once in place and the connecting pipework is completed, the surround concrete is placed and vibrated/compacted to give the necessary strength to resist deformation. A single operative can handle and install these units with comparative ease, and therefore they offer a significant saving in both manpower and costs.

Note that every gully needs a grating and these are normally set on top of regulating brickwork or a cover slab. Also, all road gullies, even the pre-cast concrete types, need to be bedded onto and surrounded with mass concrete to hold them securely in place.

Some local authorities insist on the use of a gully cover slab placed on top of the gully pot itself, rather than allowing the regulating brickwork to be built directly onto the gully/surround concrete.

Once the concrete surround is in place, the regulating brickwork can be built as required to support the grating which needs to be fitted prior to final surfacing/paving.

Often with the larger 450mm diameter pots, the brickwork itself is corbelled inwards to accommodate the smaller sized gratings. Corbelled courses should not oversail the preceding course by more than 50mm.

These clever units are a relatively recent development, developed in the 1980's by the legendary Highways Engineer Neill S. Beanland Ceng,MICE,DipTE, for use on an urban road scheme in West Yorkshire. Part of the site was formerly a gas works and rather than "excavate into the unknown" and risk opening up old cellars, tar wells, and the like, he came up with the notion of the combined kerb and drainage system which now bears his name, The Beany® Block.

The original Beany® Block was developed in conjunction with, and is manufactured exclusively by, Marshalls Ltd, but other manufacturers have come up with their own subtle variations over the past decade or so, and there are several similar, though non-compatible, systems now on the market.

And it's one of those elegant design solutions that is so simple, it makes one wonder why no-one ever thought of it before - always the sign of a design and engineering classic!

The basic system comprise two components; the U-profile base block, and the top block, with the elliptical drainage inlets that allows storm water to drain from a carriageway. The system is enhanced by the inclusion of junction units, outfall blocks , transition blocks, top units varying profiles and base units of varying depths.

A combined kerb and drainage system offers significant advantages in both costs and capacity over traditional construction methods, and we are now beginning to see more and more road construction projects use this system of drainage in preference to the old buried pipe systems. It is our opinion that we will see even more applications for these innovative systems in the coming years.

More details on the Beany® Block system can be had from the Marshalls web site.

Gratings and frames are specified according to intended loading and the anticipated flow regime. The Table below indicates typical uses for each class of grating. Patio drainage fittings can utilise any grating, from Class A upwards, whilst driveway gullies should have at least Class B gratings. The two gratings shown opposite are typical of those used on patios and driveways. 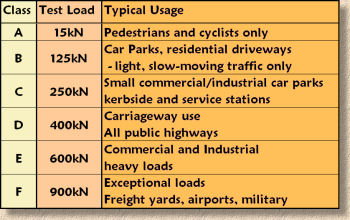 Carriageway applications require at least class C gratings and these are commonly manufactured from ductile or cast iron. Some gratings can be completely removed from their frame, some are hinged, and there are various bar patterns to suit different uses.

Double-triangular gratings such as the model shown on the left above, should be used in high-speed traffic applications as they are non-rocking and therefore less likely to cause problems. Hinged gratings (aka 'captive gratings') are a popular choice as they are more difficult, if not impossible, to steal. They may be hinged from the side/kerb face or the end face; end-hinged gratings should always have the hinge nearest the flow of traffic (upstream), so that oncoming vehicles will knock shut any grating left open accidentally.