Home / About Us / News / A SED Spectacle

Well, one thing's for sure. SED 2009 won't go down as a vintage year for the annual cranes and kit jamboree. In over twenty years of attending this event in all its various guises, I've never seen it as sparse and threadbare as it was this year, not even in the recession of the early 1990s. Perhaps someone should have set up a stand selling handcarts as there seems to be a general belief we're all heading to hell in one. 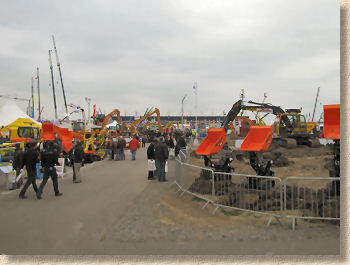 The key indicator of the buoyancy and general well-being of the construction industry in general and SED in particular is the “crane count”. The more cranes that can be picked out silhouetted against the skyline, the more robust is the industry. SED barely broke out of single figures this year.

To be fair, no-one this side of sanity expected a bumper year, but I think many were still shocked by just how poorly attended was the show. An optimist might think it was half the size of last year; a realist would think more like a third of the size. It really was that small!

No sign of the demonstration zone and many of the more familiar names were nowhere to be seen. More worryingly, the belief that there were genuine customers out these also seemed to be missing. Bits of kit were being half-heartedly demonstrated more in hope than conviction. Exhibitors emanated apathy while visitors feigned interest and together they all seemed to wonder how long to go before closing?

The Stihl stand was one of the busier - maybe contractors were eyeing-up new saws with water attachments to comply with the relatively new guidelines on cutting paving materials published last year. 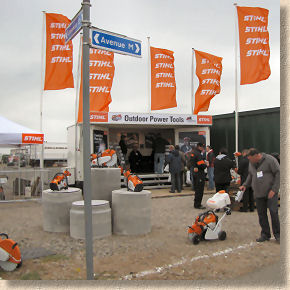 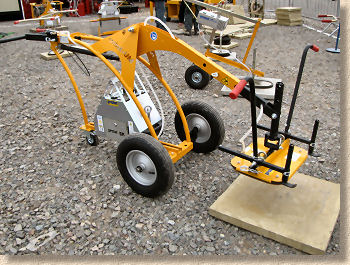 For the paving obsessives, Probst UK maintained their unblemished attendance record, but the machine-lay demo that has, in previous years featured amplified running commentary to a crowd of 50 or more had been reduced to a token effort, with a Marshalls' wagon parked at a jaunty angle to take up more space, while two Marshallettes masquerading as Probsters undertook an occasional elementary lift and place procedure with the three packs of blocks that had risked the long journey to Northamptonshire.

Best bit of kit seen in the 90 minutes required to see the whole show while ambling at a very leisurely pace, was the big muck-sucker or the " TT-UK Grundomat RSP Suction Excavator" as is the fancy name it's been given. There's a few of these in the country right now, but most of them are owned and operated by the National Grid/Skanska Gas Alliance and used on gas pipe replacement schemes. Basically, it's a turbocharged gully cleaner that generates sufficient suction to draw lumps of clay and debris into its fearsome maw. The sucky-bit is positioned by means of a hydraulic arm which is remotely-controlled by the operative via belt-mounted control pad, and while it might not be clear on the video, it has power enough to lift spade-sized dollops of earth into the huge hopper. My colleague Mark reckons 400 grand, and you might get a wee bit of change, but don't count on it!

Three years ago , when SED first moved to this venue, the appalling lack of effective traffic management resulted in three-mile queues and a 90 minute delay in getting on to the site. Oh how the organisers must have been yearning for queues even a quarter of that scale this year!