Home / About Us / News / Will it ever stop raining?

Will it ever stop raining?

Will it ever stop raining?

This article was written by Tobermore Concrete and is published as a response to the weather over recent days.

It seems a world away from investigating the collapse of the Twin Towers to advising companies on sustainable paving! Then again, you wouldn't expect a world authority on paving to be an African Tribal Chief and an ardent supporter of Rotherham United football team! John Knapton, former Professor of Structural Engineering at the University of Newcastle, is indeed a man of many parts. He is also a regular visitor to Ireland where his considerable expertise has been used to advise in the design of numerous commercial permeable paving schemes.

The Professor works exclusively in Ireland as a consultant for Tobermore and helped develop the company's unique Hydropave permeable paving system in 2000. This innovative product is currently in big demand by architects and designers as they look for sustainable drainage solutions for areas with risk of flooding. The product allows water to escape below the paving to a gravel bed where, it is stored and released in a controlled manner either back into the ground or into the existing storm water system. Hydropave also reduces pollution as the water is filtered as it goes through the system and harmful pollutants are removed.

In addition to its immense practical advantages, Hydropave is also more attractive than other surfaces such as reinforced concrete and tarmac. It is manufactured in four colours including Bracken, Brindle, Heather and Natural. One of the most recent Hydropave projects was the paving for the new store opened by Marks and Spencer in Newtownabbey. It has also been used across Ireland in many other schemes, including the Armagh Call Centre, Cork Maritime College, the Limerick Institute of Technology, several Aldi supermarkets, Newington Nursing Home in Dublin and Dunnes Stores in Roscommon.

John explains how he got involved with the company:

"Tobermore was aware of the research we were doing at Newcastle University into permeable paving systems and came to see me in 2000 to ask my advice on developing a permeable paving product for them. I helped on two fronts, in designing the shape of the product and suggesting its name. Most of the others used the word aqua but I thought hydro was just as good and so it became known as Hydropave."

"The Hydropave we developed for Tobermore has got real advantages over some of the other permeable paving systems. One of the main differences is that, as with all paving after a number of years it needs to be cleaned, and in many cases this means taking it out to clean the bed. With Hydropave, the joints between the paving are all that requires cleaning and so it can be done with a power hose, making life a lot easier for the owner."

Professor Knapton also works as a consultant for world-renowned insurers, Lloyds Underwriters and it was in this capacity that he became involved in the World Trade centre investigation.

He explains: “Lloyds were the main insurers for the Twin Towers and I had to find out if the way the towers were built and designed, contributed in anyway to their collapse after they were hit by the planes. I concluded that the way they were designed and built actually prevented them from falling over and thus would have saved around 100,000 lives which would have been directly in their paths had they fallen over. I was attached to the main investigation committee and its conclusions followed mine. The main implication of it all was that no one felt we had to stop erecting tall buildings. The only recommendation we made for the future of tall buildings was that instead of placing the lifts in one place, they should be positioned in all four corners of the buildings to give people a better chance of getting out in an emergency.”

John also has the distinction of holding the esteemed status of Tribal Chief in an African village. He explains: 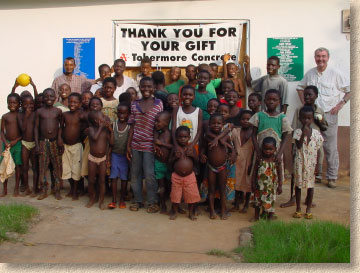 “When I was teaching at Newcastle University one of my students was from Ghana. He and I kept in touch and as his village was poor, he was trying to help raise funds for a new library. I set up a fund-raising project in the UK in 1994 and since then we have raised £175,000 for the village, helped I must say by three very generous gifts from Tobermore. In fact Tobermore enabled us to purchase a bus for the village. As a result of the fund-raising I was honoured to be given the title of Chief Eagle 1st which apparently in Africa is a very junior king.”

While flying about the world speaking at conferences and advising on permeable paving, John still finds times to support his beloved Rotherham United, for which he has a season ticket. He is still a regular visitor to Northern Ireland, advising Tobermore on new permeable paving schemes for its wide range of clients.