There are towns throughout Britain and Ireland that enjoy paving that is a little bit special, found only in that one location and possibly one or two others. Southport Pavers are such a thing: blue clay tiles that originate in North Wales but found their biggest market in the Lancashire seaside town. This page looks at their uses.

Before the 20th century successful development of modern cements and, in particular, reliable concretes, kiln-fired clay was the accepted method of moulding a plastic raw material and then processing it via firing to create reasonably regular paving units that were cheap, hard and durable.

Bricks had been used as paving units since they were first made. Truly ancient brick paved roads from Ancient Sumer survive, despite the ravages of score-settling western politicians, in what we now refer to as Iraq. In the late 19th century, those looking for a more upmarket paving alternative to the then humdrum stone flags or setts , had only one realistic choice: manufactured clay paviors.

At that time, Liverpool was the world's busiest and most financially successful port, and the Blundell family were busy developing the newly fashionable coastal resort of Southport just a few miles up the Lancashire coast. When their agents went looking for a distinctive material to pave the Paris-inspired boulevards of their chic streets and affluent avenues, they found the brick factories of Buckley in North Wales, and the exceptionally hard 'stable pavers' produced from the local Buckley Fire Clay by manufacturers such as C. Davison & Co. and Catheralls.

And so the highly distinctive "Southport Paver" came into being. Beautiful in its simplicity, with a wonderful natural colouring of deep indigo blues with touches of cinder red, gold and buff, and an incredibly hard finish that was branded "Adamantine", hundreds of thousands of these superb pavers were despatched by rail 45 miles or so north to the rapidly expanding and incredibly bourgeois new playground of the wealthy. 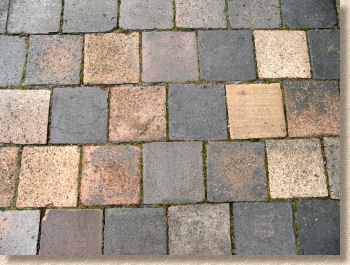 More than a hundred years later, many of these pavers survive, although more and more are replaced with tarmacadam or modern materials each year. During the late 1980s, our contracting business lifted, salvaged and re-laid thousands of square metres of them to the footpaths of the more salubrious parts of Ainsdale, Birkdale, Southport and Churchtown, ensuring these unique and historically valuable remnants of a bygone age provide safe, sound and attractive pavements for the well-heeled burghers of the town for a few more years yet.

Manufactured to imperial dimensions, each tile measures 9" by 9" (16 to the square yard) equivalent to 229 x 229mm (19.1 per m2) and was a chunky 1¾" (45mm) thick. Originally, many were laid on the one commodity that was not in short supply in Southport: marine sand, and jointed with the black cinder/lime mortar that was common at the time. In some areas, notably the more down-at-heel areas of Southport itself, they were laid on a bed of crushed cinders which were readily available at the time from the hundreds of Lancashire boilers that powered almost every factory in the land.

The re-laying work that was undertaken in the 1980s replicated this method as far as practical at the time, with the pavers being laid onto a 30-40mm bed of Mersey Grit over a 150mm sub-base of Type 1 granular material, and jointed with a black lime mortar. 20 years on, and much of the work is still in fine condition, although some of the areas subjected to vehicle overrun have suffered, and in places the lime mortar has succumbed, but there are still many areas of original paving to be found and appreciated around the town, if you know where to look.

It's quite likely that, were they to be re-laid now, they'd go onto a full mortar bed with either cement- or resin mortar joints. However, the 1980s method of using a laying course sand that compacts better than most and isn't troubled by groundwater, combined with the degree of flexibility offered by a lime mortar has stood the test of time reasonably well, and these are one of those pavings that actually looks better when there's a bit of unevenness and 'character' to the pavement, a pavement that looks as though it has lived a bit, yet is none the worse for the experience. 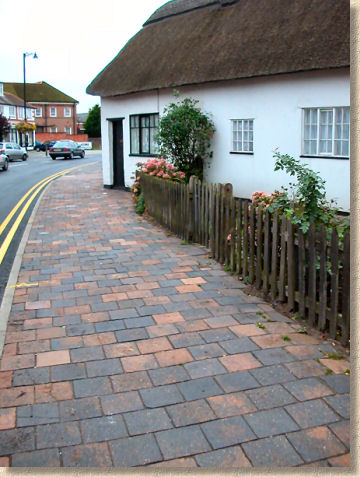 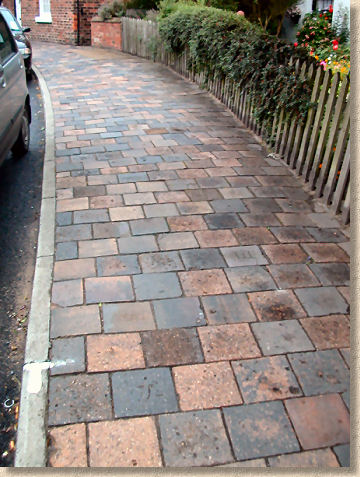 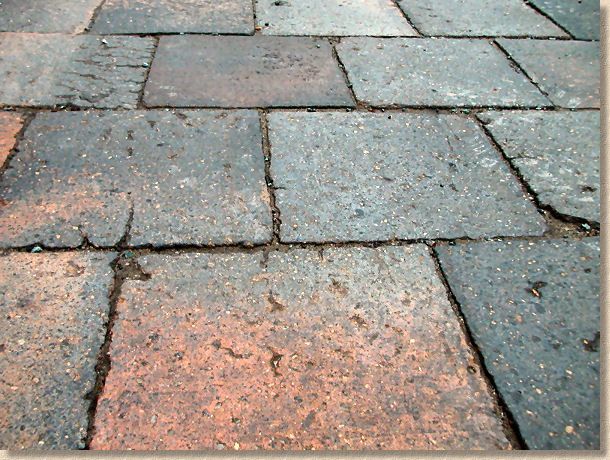