This page looks at some of the alternative jointing products that can be used for filling the gaps between paving units.

Some of these materials have a long tradition of use in the trade, but others have been employed by designers and are aimed to be more decorative than functional, usually relying on a standard jointing material beneath a decorative covering.

Whilst the preceding pages detailed the most commonly encountered jointing methods, there are many other ways of filling the gaps between paving units. Some, such as the slate and washers illustrated below, are purely decorative, and would normally have a partially-filled mortar joint that is 'topped-off' with these so-called attractive dressings.

Others, such as the fine limestone shown opposite, are used on flexible pavements of blocks or setts where the joints are relatively wide (more than 6mm) but where a solid joint is not required. Crushed rock fines sometimes used for filling the joints between sett paving is known as 'splitt' in some areas and is considered on a separate page . The larger grain size of this type of joint filling medium makes it more resistant to 'scour', that is, being washed out by surface water, street sweepers or general maintenance. 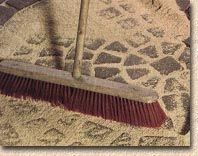 Where a paving project is not subjected to vehicle traffic, one of the decorative jointing mediums could be used, if so desired, but careful consideration should be given as to how the planned jointing material will complement the paving itself. With some pointed paving, the mortar itself can dominate the finished effect and instead of being stunned by the beauty of the flags that have cost 25 quid per square metre or more, the eye is unable to wrench itself away from the mortar that cost a couple of quid. 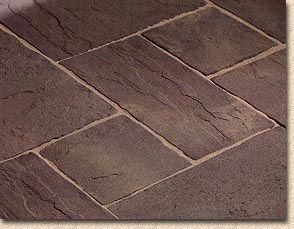 In the first example opposite, a light-coloured mortar perfectly complements the dark colour of the reproduction riven flags, but be aware that this pale jointing will darken over time as detritus accumulates on the surface. This particular scheme would probably work best in a conservatory or rustic kitchen , where it could be sealed to protect the colours.

Gravel is a popular choice as an alternative joint-filler for domestic patios, particularly those with very wide joints, say 50-150mm. It helps keep down the cost, by requiring fewer flags per square metre, but it can be a little awkward to walk across, and children love to put the gravel into the gullies. 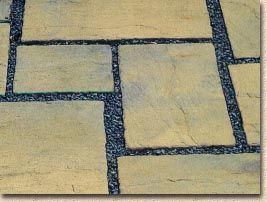 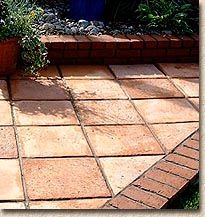 Here we have two terracotta styled pavings - one pointed with a traditional mortar for a neat and tidy finish, while the other has had the joints filled with a pinkish grit to give a more cottagey feel to the paving. 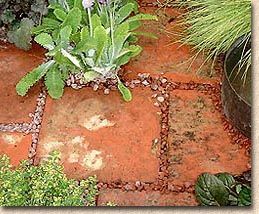 Two 'designer-ish' jointing materials here, seen at various garden shows over the past few years. While they may not be to everyone's taste, they are certainly eye-catching. However, it's important to bear in mind that these are purely decorative, dreamt up by trendy designers who wouldn't know how to lay a flag if their life depended on it!

The steel washers in this first image will most likely rust if left out in the open for more than a week, which could actually be quite attractive, while the aluminium granules will probably end up being scattered here, there and everywhere. Not a jointing to choose if you have children. 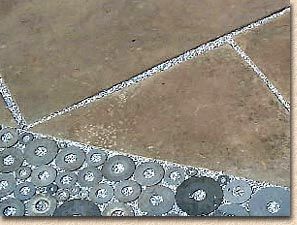 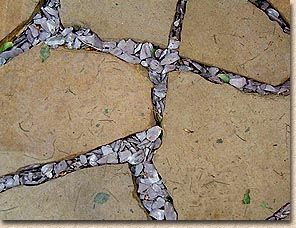 The slate mulch used between the random rubble stone paving looks most attractive, a good contrast between light and dark, with the rough-and-ready non-geometric shapes of the stones reflected in the slate, but it will almost certainly fill with detritus in next to no time, especially in a garden setting, and will need to be cleaned out at least once a year.