Home / About Us / News / New Rules for Cutting Paving

At a launch event held at the Heath and Safety Executive (HSE) offices in central London on Tuesday morning, Lord McKenzie, Minister responsible for Health and Safety at the Department of Work and Pensions, graciously unveiled the new guidance for cutting paving materials to a specially invited audience of interested parties.

Since February of last year, the HSE has been co-ordinating a working group of "stakeholders", that is manufacturers, employers, suppliers, clients, trade unions, training organisations, loud-mouthed website owners, and other bodies having an interest or "stake" in the paving industry, with the aim of developing a strategy to introduce and embed a policy of reducing the risk to health resulting from the dust generated when certain paving materials are cut.

The idea of creating the stakeholder working group is critical: it ensures that any solutions, strategies or suggestions that are put forward come from those directly involved in the industry rather than some faceless civil servant who wouldn't know what a maul was if it hit them on the head. So, instead of well-intentioned but largely clueless HSE staff imposing their will, the HSE simply provide a meeting room, a few butties, a pot of coffee and the impetus, and then allow the working group to determine what will work, what won't; what might be acceptable to contractors and what mightn't; what could be done by manufacturers and designers and what couldn't.

Many people think that it's the “dust” that's the problem, which is not quite the full story. While the dust is, indeed, a nuisance, it's a specific component of the dust, known as Respirable Crystalline Silica (RCS) that is the really dangerous stuff. This is generated when silica-containing materials, such as concrete, are cut using a high speed blade. If breathed into the lungs, RCS can cause serious damage, such as silicosis, pulmonary disease, emphysema or even cancer. 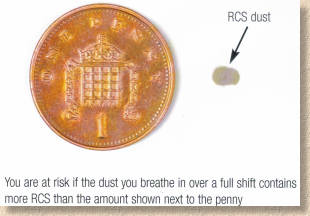 The result (or "outcome", as they like to call it) of the working group is this definitive new guidance regarding cutting, with particular advice targeted at specific areas of the wider paving industry. For example, Interpave (the concrete paving manufacturer's trade association) has produced some very useful guidance and case studies for designers and architects, in which they are encouraged to "design out" any cutting whenever possible by using shorter units, or making a pavement a whole number of flags/blocks wide. Meanwhile, information on 'alternative' products that do not produce RCS when cut is also being made readily available from manufacturers such as Durakerb . Hire shops, in association with their trade association and the major saw manufacturers will be offering water suppression kits with every saw hired and they'll be distributing a DVD and leaflet that outlines the guidance as well as giving good instructive advice on using water suppression.

As for contractors, the key advice is neatly and succinctly summarised as a hierarchy:

Avoid cutting by saws whenever possible by using a splitter (guillotine); Minimise whatever cutting is unavoidable by using shorter units; and Control any dust when cutting by using water suppression.

Thanks largely to input from those with practical experience within the working group, it has been acknowledged that cutting is inevitable and many contractors and operatives will be required to cut paving units at some point in their working life. Therefore, important new guidance on the use of water suppression has also been issued.

In essence, from now on, whenever you cut a concrete* flag, kerb or block** using a saw, you MUST use water suppression to damp down the dust and prevent the dangerous RCS becoming airborne. This means attaching a water hose to the fitting that can be found on the side of every modern saw, and connecting that to either a tap or a portable water bottle.

* It's not solely concrete: it's any silica-containing paving material, which would include sandstone, quartzite, and yorkstone.

** Interpave is very keen to completely avoid cutting of blocks using hand-held saws or angle grinders for safety reasons. Use of bench saws (chop saws) would be acceptable, but the splitter is the preferred option.

However, don't expect HSE inspectors to be on the prowl looking for the eejits who think the guidance doesn't apply to them, or that their employees are not worth protecting. The hope is that the guidance will be adopted voluntarily simply because it's bloody good sense. Most (if not all) of the major contractors have adopted the guidance as policy, as have the Highways Agency and the Civil Engineers' Contractors Association, so it will be mandatory on all their sites. Many local authorities will adopt the guidance, and expect their term contractors to do likewise, so like it or not (and what's not to like?), this guidance will eventually impact on YOUR business. For those pillocks that think they can ignore the guidance, HSE inspectors already have the power to issue a prohibition notice or, if a repeat offender is involved, a notice to cease work, when the health of workers of the public is at risk, but the hope is to rely on the carrot of common sense and better site conditions rather than the stick of enforcement notices.

A DVD toolkit has been produced, along with the aforementioned A5 leaflet. The HSE will be promoting the new guidance via their Battle Bus at SED and other relevant events in the coming months, and they've even acquired a job lot of those incredibly useful Paver's Markers from friend-of-the-website Richard Evans, emblazoning them with various 'damp the dust' messages for distribution to needy contractors. 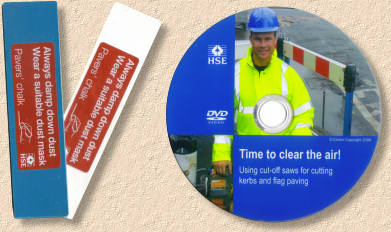 Overall, this is an important step in making our trade a safer place to work. We've been using these high-speed cut-off saws for a generation now, and it can only be a matter of time before we start to see more and more workers coughing-up their innards because of the dust. When I served my time, saws were only just becoming popular; now they are the norm, so we need to ensure that the lads and lasses working in today's paving trade are not forced out of the trade prematurely due to an “industrial disease” that is so easy to eliminate.

As the campaign slogan says: It's time to clear the air. Make your site a safer place to be by following the guidance and using water suppression whenever cutting. You only get one pair of lungs - don't get them dirty!