Home / About Us / News / New Catalogue from TopPave

TopPave are the quickest off the mark this season, with their 2005 catalogue landing in the Pavingexpert in-tray during the first full working week of the year!

The front cover is a sombre black and features a strange image of a stainless steel tubular water feature with a Keats Circle feature of riven reproduction paving out of focus in the background. Is this the first sign that some arty-farty type has been messing about with the photos and decided to focus on "lifestyle" rather than the paving?

The first double-spread page, facing when the catalogue is opened, lists the contents, conveniently divided into patio and driveway products, with the technical info tucked in at the back. This is followed by a double page spread about the Approved Installers scheme, and some general info on choosing products, with contact telephone numbers and the website address. 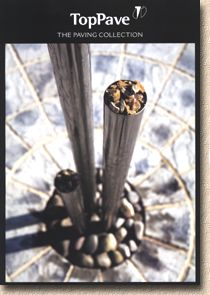 We're on pages 6/7 by now and the first double page image is of some lass in a bathrobe - just what a contractor wants to see when rolling up to measure a job! There's a glimpse of a patio through the open French windows; looks like natural stone, but it's hard to tell as the paving comprises around 10% of the image. More lifestyle stuff - oh dear!

The paving photos actually start on the next page, with the Milton riven reproduction flags. These have been around for a while but there a new circle feature, complete with corner kit, as well as the ellipse feature that was shown at GLEE back last September. They've also launched a Milton Patio Pack - 7.29m² of different sizes in a single pack. I know it's a matter of personal taste, but I can't help thinking the joints are too wide with these flags. If I'm paying umpteen quid per square metre for paving, I want to see the flagstones, not the mortar jointing, or, as in these publicity photos, the Geo-Fix stuff. 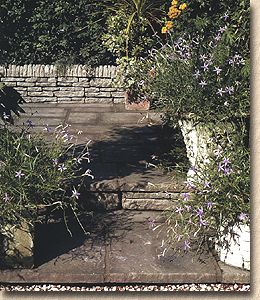 The Tennyson riven reproduction flagstones are a bit more to my liking. Nice, neat joints; not too much relief on the surface texture; a nice range of sizes, and now they've added a new colour - Woodland Stone, a sort of earthy brown blend - as well as making them available as a 7.29m² Patio Pack.

The front cover water feature re-appears on page 18, surrounded by a Keats Circle feature. I'm sure you'll make up your own minds, but it reminds me of scaffold pipes.

The imported stone paving products start on page 20. The sandstone flags rejoice under the name of Sheridan, and comes in 4 basic colour options. The photos, particularly the full page shot of a rectangular patio set into a huge lawn overlooking parkland, are superb and really show off the range of natural colouring and luscious texture that has made these imports so popular over recent years. The flagstones have now been joined by what TopPave are calling 'Cobbles' - 3 small tiles of Indian sandstone, 100/150/200x150mm and around 40mm thick. Them's not cobbles: them's tiles! Cobbles are rounded stones from a river or a beach. They're certainly not rounded, and they're not deep enough to be setts, so they can only be small flags or they can be tiles! Anyway, the idea is that these flaggy-tiley-cobbles can be used as paving or built-up as walling, which is a great idea, and one I look forward to seeing at some point.

Joining the Indian sandstone is the new range of 30mm Travertine flagstones in Blue(ish) yellow, white and pink. This is only available in Patio Packs of 12.6m², with a mix of 3 sizes to each pack. The photo and text suggests that the Travertine is suitable for patio use, as well as for indoors. Has anyone had good results using Travertine on a patio? Too holey? That's what you contractors have been telling me for the last 18 months since the market was overwhelmed with Turkish travertine

Moving on to the driveways section, and the lass in the bathrobe has now dried her hair and is getting in/out of the passenger side of a posh convertible car. The drive's paved with the very nice Aura blocks, and the following page shows a better view of the actual paving, including the new colour, Burnt Fleck, which is a sort pf reddy-tinted variation of the Bronze and Silver fleck blocks from last year.

There's also a complementary Aura kerb unit, now, available in all 3 colour blends, but only as a 'small' 125x125x100mm unit with a bullnose/chamfer option. I really like this block, so the kerb is a very welcome addition, but I notice the blurb is still pushing the Classico limestone 'chippings' as essential - how many of us actually use them when jointing?

Another new addition to the block paving range is "Autumn Sunset", a new multi-colour for the Antique range. This brings more yellow tones to the well-received Autumn Mix colour blend that's been around for a while, and should give a much lighter-looking finish to a project. There's also a new size - 200x266mm which is intended to be used as a 'jumper' block, bridging two adjacent courses and so 'breaking-up' the bog-standard coursed layout for these blocks, as well as offering all sorts of new pattern options.

All the owld favourites are still there: the excellent Classico which is still regarded by many as the best "sett-effect" block on the market; Fineline, Penta and, of course, Intersett/Drivestyle. The second-to-none range of accessories such as the Step Units, Channels and Bishop's hats are also still with us, you'll be glad to hear.

The Technical section is better than ever. Well laid out; well-considered; lots of good info in an easily-understood format. The "How to lay..." sections are limited to a page each for Patios and Driveways, but then TopPave, like all other manufacturers, are in the business of selling blocks, not giving step-by-step laying instructions. However, it's great to see that the ridiculous spot-bedding methodology for laying patio flags has been consigned to the bin, where it belongs, although the new text is somewhat vague as to just how a bed should be prepared. 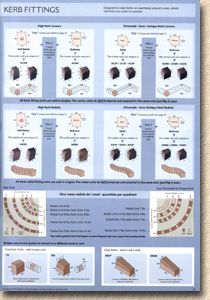 Overall, it's a good effort. The "lifestyling" I so feared on seeing the front cover is kept to an acceptable level, and the photos are generally very good, given the space available. There's not a great deal of new stuff, although the same can, and will, be said of most of the other manufacturers. If I had to pick a fave new item, It's probably be the Antique Jumper Block - I can see this being reasonably popular and it does open up a whole new range of pattern options, which is almost as good as a new product!

Get your own copy of the new TopPave catalogue by calling their Help line on 0870 241 3450 or by toddling along to the website .