Calibrated paving refers to flagstones (most commonly) that have been processed to ensure they are of a reasonably consistent thickness. The calibration process is examined on this page.

Calibrating is a process which takes riven flags of variable thickness and runs them through a strip mill to create paving stones of a fairly regular and even depth.

By eliminating the variation in thickness that can occur with natural stone paving units, installation is rendered that bit easier as it allows the use of screeded beds.

As discussed on the main page for imported stone, once the flagstones are of a regular thickness, they can (in theory) be laid on a screeded laying course rather than the more fussy, more skilful individual bed needed for uncalibrated stone. This is alleged to save time for the installer (debatable - a good flagger will lay using either method at more or less the same rate) but it definitely does slightly de-skill the craft by removing the arcane art of judging a bed depth and replacing it with straightforward, labourer-capable screeding.

However, laying large element paving (anything 300x300mm or larger in plan dimensions) such as flagstones onto a screeded bed only really works well when the pavement is single, constant, regular plane.

There are still some problems: laying flagstones to twisting falls, or summits and valleys, is far too tricky for screed bedding, and the inevitable cutting-in still has to be undertaken with care. However, the fact remains that calibrated paving makes life easier for the professional installer but, in truth, DIYers and the 'occasional paviors' (landscapers, builders and other part-timers with no real training or much experience) may well struggle to gain any real advantage by using a screeded bed.

Why it came about:

As the residential market for imported stone became overwhelmed, with every garden centre and builder's yard churning out flagstones and setts of variable quality, some of the better suppliers started to ask their regular customers, which means the contractors, what could be done to retain their business and make them happy.

There were all sorts of niggles about quality, packaging, colour variation and more, but one of the most common moans was about the variation in thickness which occurs with all unprocessed riven stone. It's no exaggeration to say that flagstone thickness could be anything from 15mm to 35mm, and it was actually possible to see that much variation on a single flagstone (OK - it would probably be one of the bigger flagstones rather than a 300x300mm piece).

Now *that* was something about which the manufacturers could do something, and it was something that could be done back in India (or China or other 'developing nations' as appropriate) where processing costs are significantly lower. Even better, the process involved would allow stone that might previously have been regarded as 'seconds' to be upgraded to 'first', and so increase its value. And even better than better, by producing stone of a fairly uniform thickness, a premium could be charged!

There's also a benefit to importers: they get more saleable stone per pack than is the case with uncalibrated, 'as-it-comes' flagstones. Do you think they pass on this benefit to the customer via lower cost paving? Do they buggery!

The process involved is variously known as 'calibrating' or 'strip milling'. It involves running the flagstones through a series of closely-spaced saw blades to cut grooves or channels into the underside, and then nobble-off the remaining upstand to leave a flagstone of the selected thickness.

So the flags are fed through the strip mill and the vicious blades eat into the stone and create the series of grooves that give strip-milled flagstones there characteristic look.

And what emerges is a flagstone with a series of projecting 'blades'....

....which can be chiselled off to leave a flag of the required 'calibrated' thickness 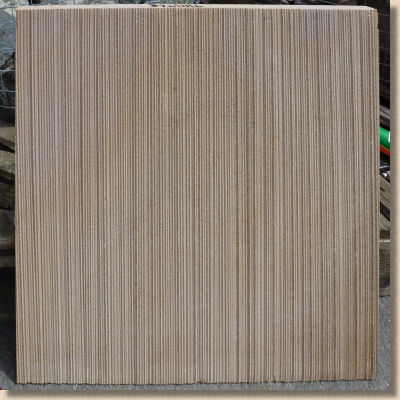 No matter how hard we try, there's always at least one eejit.....!

Nothing new under the sun:

Think this is radical new technology? Cutting-edge, if you will? Our Victorian forefathers were doing it over 100 years ago to put a relatively smooth face onto flagstone with notoriously uneven bedding planes, such as the Rossendale flags from East Lancashire.