How many episodes of this event have I chalked up now? Six or seven, I should imagine, and it has become one of my favourite jaunts of the year, despite all the traipsing and pre-booking required. It’s not too big; not too small; and has a ‘hit rate’, that is the number of genuinely interesting exhibitors as a proportion of the whole, that exceeds that of almost any other landscaping or construction show. It’s always a full day, and usually there’s more than can actually be packed into a single, seven hour visit.

Changes this year, though. For a start, on alighting from the terribly considerate and heartily welcome shuttle bus which gathers visitors from the tube station a half mile or so away, the first thing to notice is that the parking area in front of the marquee is more-or-less clear of any external exhibitors. There’s two or three – a coffee shop-in-a-van, a plant supplier, and the inevitable porcelain provider, of which there was no shortage at this iteration of the event.

In fact, that preponderance of porcelain will probably be the abiding memory of this show. At times, it felt that every other stand was flogging porcelain, or, what they would like us to think is porcelain….but is it? Now, there’s no issue with established and respected names showing us what they have for the coming season, and no-one could object to a handful of new or lesser-known faces, but there were far too many ‘unknown quantities’ here, and even cursory discussions lead to a strong suspicion that several are what may be thought of as “bandwagonners” – no real interest or expertise with the trade, but a nose finely attuned to a potential market and a willingness to flog any owld rubbish to an unsuspecting and unknowing public. More than one of them couldn’t look me in the eye when asked whether their wares were true porcelain or a low-cost ceramic. These people certainly won’t be getting a mention anywhere in this review.

Of the good porcelain, Global Stone with their Trovia brand had an almost inevitably good offer of both quality and value, and London Stone (although I never got a chance to talk) were similarly well-appointed. This is only to be expected of trusted names, with a pedigree in the paving trade and a thorough understanding of what the market will expect.

One new porcelain exhibitor (and there were plenty) that did manage to attract my attention was the puzzlingly named ‘Kinorgia’ with their copy of the celebrated Scout Moor newly sawn yorkstone, and a very convincing copy it is, with accurate colouring and faithful reproduction of the distinctive coal traces. The real proof of this will be when it’s laid over a larger area and we are given the chance to see just how much variation there is, how many ‘prints’ they’ve managed to make, and how convincing it really is.

Very little in terms of what we might think of as ‘traditional paving’. Pavestone have a very useful ‘Shade and Colour’ guide now available which sorts their eclectic range of natural stone and porcelains based on hue rather than by material, which is often how customers make their choice. 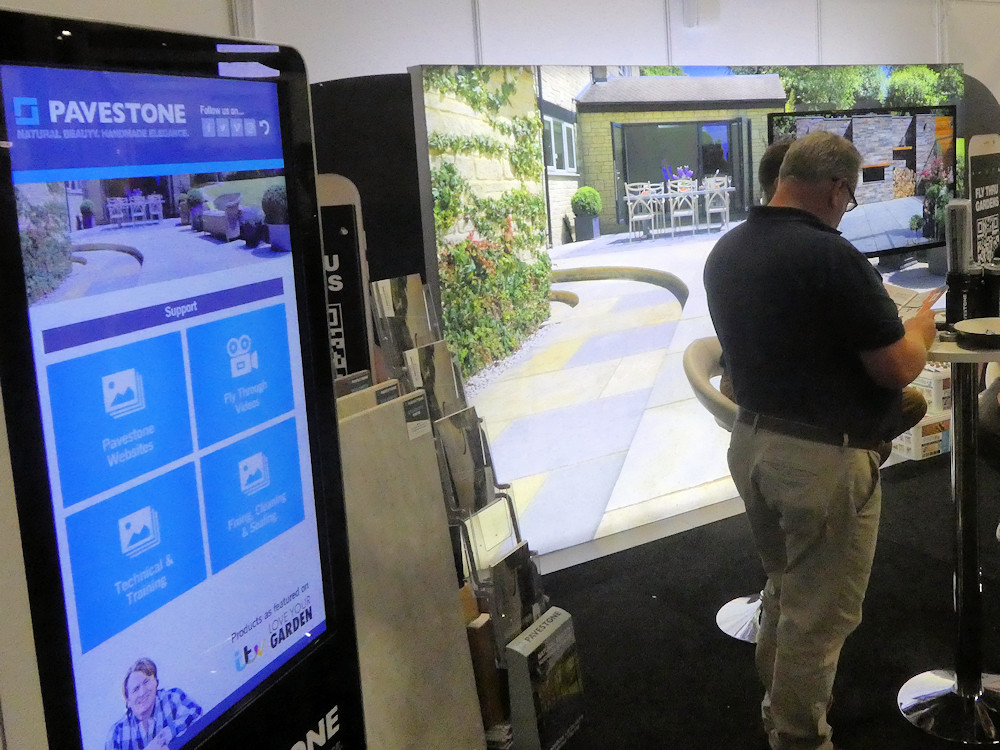 Westminster Stone with their tried and tested high-class wet-cast concrete and natural stone have dabbled with porcelain, but their forte remains the National Trust range of reproduction flagstones. Miles Stone also have a touch of porcelain but they also have an interesting Spanish limestone that, at first glance, looks very much like a Pennine sandstone, while Johnson Wellfield (another exhibitor with whom I failed to get a chance to converse) had a mouth-watering display of the real thing, the famed Crosland Hill yorkstone. I sailed past Yorkstone Supplies, fully intending to return for a chat, but time ran out and I missed the chance, but it was not intentional. And a few snatched seconds while being ushered out by stewards wanting to close the show was all that I managed with Strata International, not even enough time to ascertain whether this is the same Strata of previous encounters.

Metal edging systems are experiencing something of a surge in interest, and at least three of the more notable suppliers were in attendance: EverEdge with their familiar steel sections, and a few adaptations to keep the brand fresh; Rite-Edge with their distinctive and appealing aluminium system; and Core Landscape Products with the versatile Core Edge along with a plethora of other clever hard-landscaping support products. The Core Tree Root Protection (TRP) system is finding favour with the military, apparently, and the bespoke planter screens in Corten Steel are proving to be incredibly popular with garden designers.

Aggregates usually have more of a presence, but 2019 sees the field more restricted than is usual. Grundon staked out a prime spot right outside the seminar stages and so ensured a steady stream of interest in their range, of which the wonderful Coxwell self-binding gravel is, for me, the stand-out product, but I know the landscapers are keenly taken with the modified soils and specialist aggregates. Long Rake Spar specialise in gravels, both for loose, decorative use and for inclusion with resin bound systems, and Gravelmaster offer nationwide supply of bagged decorative aggregates.

And talking about resin bound systems, an intriguing product range from new face, Vuba. The resin bound market is burgeoning and that brings with it new challenges, not least of which is how to develop what we have. The usual solution is to produce ever more esoteric aggregate blends or produced resins that can withstand the blast-off forces of a Space Shuttle launch, but Vuba have taken a highly original direction and created products that are actually *less* resilient. Clever, eh?

I appreciate that you are now officially puzzled. Why on earth would anyone want a less resilient resin binder? What is the point of something that is not as tough, not as strong, not as indestructible?

The short answer is that there are applications where super-strength and mega-resilience are not actually required. Think of an area of decorative gravel in a garden. Maybe it’s one of those Zen gardens with a specific pattern or arrangements. Wouldn’t it be useful to ‘freeze’ that arrangement in time, without going to all the trouble of a super-tough resin bound system and none of the glossiness?

That’s precisely what these Zuba products provide: a ‘light touch’ binding of gravel or aggregate so that it stays put but not rock-solid as is often the case with a conventional resin bound system. They’re not intended for vehicular traffic, not even for regular foot traffic, although they can cope with the occasional trampling. There’s even a simple ‘Spray On’ version for binding the decorative aggregate used to dress the top of plant pots.

It’s a clever progression of the resin bound principle and one I feel sure will find a multitude of uses in all sorts of landscaping schemes, both internally and outdoors.

Meanwhile, with the more conventional resin bound systems, AddaGrip have their increasingly popular TerraBase attracting lots of attention, thanks to its ability to provide a trafficable surface with no need for the usual bitmac or concrete base. And if that’s not enough, they’ve only gone and recruited the irrepressible Donna Le Carpentier to the AddaGrip team, complete with her infectious laugh and years of invaluable experience. Got to be a winner!

Azpects have the knack of creating products you didn’t realise you needed until you try them. They built the brand on the back of their one-part resin mortar, EasyJoint, but there’s been no holding them back since then, and the one item that really caught my eye this time was the ingenious plastic spacers for porcelain paving. They’re a modified version of a well-known tile spacer system, but, yet again, until you actually try them you can’t fully appreciate just how damned useful they can be.

And finally, a big plug for Interlay, the independent paving trade contractor’s association. Leading members, including Chair and Vice-Chair Darren and John, took time out from running their own busy paving businesses to support Secretary Colin on the stand over two days, promoting the values of the better contractors and broadcasting the importance of having an independent trade body to speak for those that toil each day laying flags and blocks and kerbs and setts and so much more. The task of spreading the word about those installers and contractors with genuine skills and integrity may seem thankless at times, but it is absolutely critical to preserving and advancing the status of our noble trade.

I know I’ve missed far too many exhibitors, both on the day itself and within this cursory review. As I always say after these shindigs, the only way to be certain of getting a mention is to collar me when you see me hobbling by. I do try to talk to as many people as possible but with only so many hours in the day, it’s almost inevitable that someone gets missed out.

So: how to sum up? I sense that, for the first time in this show’s history, it has stood still, tread water, failed to progress. The (almost) empty car park area should have alerted any visitors about what to expect: a reduced number of exhibitors, a reduction in the effort made by those exhibitors, some BIG names missing, and a lower-than usual footfall, in my estimation. The second day just wasn’t as busy as I’d expected and feedback from exhibitors supports that view. It was a relatively quiet show.

Why is that? Has the event-attending public grown bored of such shows? Was the exhibitor list or seminar schedule insufficiently appealing? Is it a matter of it being the same exhibitors talking to the same visitors year-on-year? Is it Brexit? Nearly everything else wrong with the world can be blamed, rightly or wrongly, on Brexit! Are the public just not spending in this time of uncertainty?

As one exhibitor put it, this event is staged during good weather smack bang in the centre of London, which has the biggest concentration of garden designers, landscape architects, paving contractors and crazy wealth anywhere in the country. This event should be bursting at the seams with visitors….but it’s not.

Still, it’s too good a show to miss and one of the very few that has any genuine relevance for our trade and the wider landscaping industry, so it will return, and so will I, but it will be with more of a sense of concern than has ever been the case previously.