This is the second part of a two-part review of the SED show held at Fen Farm, Milton Keynes on May 17th-19th 2005. For the first part of this review, click here .

With the stricter implementation of manual handling regulations for kerb and flag laying, there were a larger number of kerb-handling gadgets on show than ever before. These ranged from sophisticated vacuum-lifts attached to all sorts of machines to simple scissor-grabs-on-a-pair-of-wheels that cost less than a grand. Speaking from personal experience, those lifting gizmos that grab the ends of the kerbs are a bit more troublesome – because the ends are held by the mechanism, you can't get a tight 3mm joint when positioning the kerbs, so you end up placing and then adjusting the position of the kerb (or flag) to avoid overly wide joints. Those gizmos that grab the front/rear faces or the vacuum lifts that suck on to the top surface, allow for accurate, first-time positioning and this is often reflected in the price.

Other kit on show that might be of interest includes the skip-loaders and mini-diggers. Thankfully, it seems the days of two lads hoisting a barrow over the side of a skip, or taking an almighty run-up at an iffy-looking plank balanced precariously atop a couple of 25 litre drums are all but over and skip loaders are the way we work nowadays.

The little "Muck Trucks" are rightly popular, and they come is a variety of sizes. Although they need a ramp to ensure you get your money's worth out of a skip, they have a thousand-and-one other uses around the site and are well on the way to becoming an essential item.

There's a thousand-and-two different 360deg; mini-excavators on the market, so there's not much point in showing the new models here as they are simply variations on a theme, but I'm surprised this little JCB Mini hasn't attracted too many contractors. I know they're a bit bulkier (and more expensive) than, say, a 1.5 Tonne mini, but they are so much more versatile, with that 4-in-1 front bucket, and they're a damn sight faster when it comes to tracking up and down the site. The other little loading shovel shown here impressed me as it was so nippy. It was literally flying up and down the trials area, but with only a standard front bucket, it's a little limited in what it can do, but would be a handy yoke for soft landscapers looking to shift a bit of soil, I suppose.

Finally, to round off this all-too-short review of what is one of the biggest days out of the year, a few items of more general interest. As ever, the stand selling Toy Diggers, or “Miniature and Model Construction Equipment” as they like to be called, was doing a roaring trade. It's something that appeals to the boy in us that makes us want to own a pocket-sized version of the same piece of kit we spend 8 hours a day operating on site, except some of these models would require very large (and relatively deep!) pockets. The prices are often scary, but you have to bear in mind, these are not really toys – unlike the Tonka toys I bought my son when he was a toddler, these miniatures are intended for display cases and boardrooms rather than sand pits and back gardens!

It was also great to see the "Classic Plant" displayed by the construction industry charity, The Lighthouse Club . Kit from by-gone years lovingly restored to near-new condition. 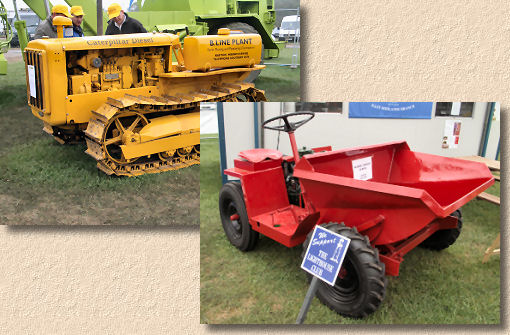 However, you know you're getting old when the kit on display is the same machinery you used when setting out in this trade. The Drott and the Wingate all-or-nothing drop-skip dumper took me right back to the late 1960s and early 70s when I used to help out my dad on the building sites of north-west England. Not so sure about “Classic”, though. That bloody dumper was a pile of shite back then – I'm not convinced the passing of 30-odd years means it's improved at all!

For those of you that reckon final consolidation of a block paving job is a slow, boring and very, very noisy operation, how about this? Three Wacker plates (yes, genuine Wackers ) strapped together for serious compaction of larger areas. This is the sort of kit used on large, machine-lay projects, where a single plate wouldn't be able to keep up with the speed of laying achieved by the clamp-lift-place machine, but a larger, beefier single plate would provide too much wallop over too small and area. The next time you're rushing to get a job consolidated and sanded up before the rain comes, remember this yoke! 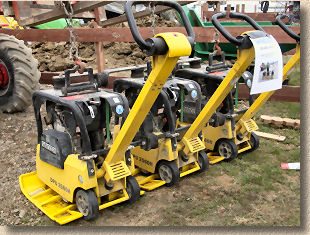 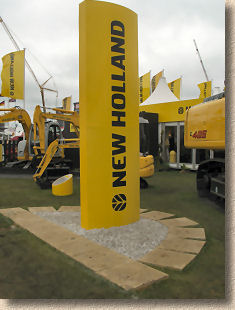 And to round things off, the Pavingexpert award for crappest flagging job goes to …<fx: drumroll> New Holland , for this classic example of truly awful workmanship. They might make excellent machinery for the construction and agricultural industries, but they've been done by the cowboys if this flagging is anything to go by.

“Kinell”, as they often say on site!

So, another show over, and millions of quids worth of plant sold yet again. I'm annoyed I missed the block paving machine-lay demonstration, but if no-one tells me about these events, I can't bring them to the attention of the masses and I'm unlikely to put in an appearance myself.