Can it really be a year since the last Contractor's Evening at the Tobermore Paving Centre in Leyland? I recall that event taking place on what turned out to be the first really warm evening of a long, hot summer, and then driving home along the M6 at midnight with the sunroof (moonroof?) and all the windows wide open. Checking my diary, I see that the 2006 event was actually staged in early June, and I read in my notes that several contractors had missed the evening as they were keen to take advantage of the fine weather and extended daylight hours, so maybe bringing it forward in the calendar by a few weeks would make it more convenient for those grafters to sacrifice a sunny Spring evening to be regaled and refreshed by the Tobermore posse.

Early in the evening, as the first contractors wandered in and helped themselves to a beer, the whisper amongst Tobermore staff was that they hoped to get around 90 contractors to attend, and anything over and above that could only be viewed as a huge bonus, but by 7pm, it was becoming patently obvious that the target would be surpassed, and surpassed with ease, as the paving display areas were choc-a-block, the office building was bursting at the seams, the samples shed was overflowing and there was a real risk that the car park would overflow and we'd have to commandeer the parking facilities of the swanky golf club just across the A49. 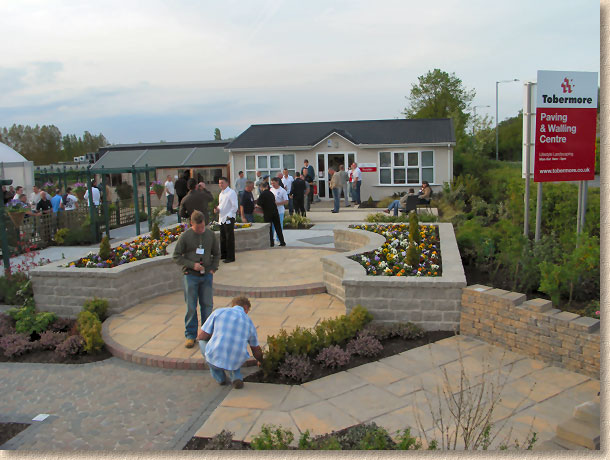 Although I have made a couple of return visits to the Paving Centre since its official opening in the Spring of 2006, it was a revelation to see how it has matured in the intervening period. Although it's still early in the horticultural season, the planting looks and feels more settled, less immediate. It has filled out and completed the picture. The paving is, as you'd expect, pristine, immaculately laid, and truly good enough to eat your dinner off it. Luckily, to ensure the paving remains in tip-top condition and isn't sullied by dozens of contractors snuffling at a surface-level steak dinner, the caterers had very wisely brought ample supplies of crockery.

As the evening drew in, the assembled throng of guests gradually headed for the huge marquee to enjoy a free bar, an appetising dinner and a selection of desserts, followed by a stand-up comedian and more beer. 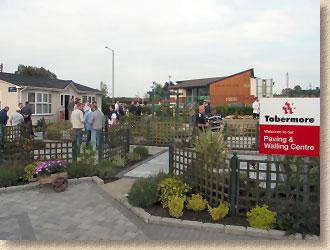 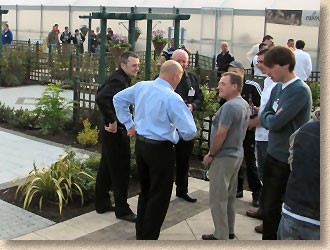 The real worth of these evenings lies not in the free trough, but in the networking opportunities; the chance to meet fellow contractors, designers, specifiers; to swap anecdotes and workarounds; to boast, brag and be amazed at what's possible when you put your mind to it. Some faces are familiar while many are new, but there's a great sense of camaraderie in knowing that you're amongst others that share your passion, other paving nuts.

Once in the marquee, it was considerably easier to get a more accurate assessment of numbers. Under canvas that was noticeably bigger than last year, every table was filled to bursting, and a bit of simple mental arithmetic indicated somewhere between 120 and 150 people present, easily beating the self-imposed Tobermore target. 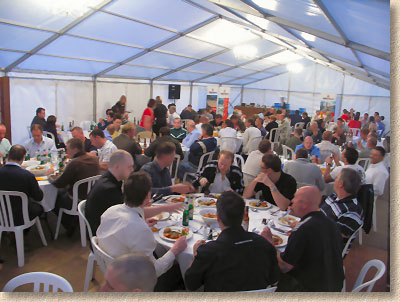 One of the features of these evenings is the no-frills, no-fuss involvement of senior management. Not just sales directors and business development managers, but the actual company owner and MD. I can't think of any other major manufacturer where the managing director gleefully and willingly mingles with the hoi-polloi. David Henderson doesn't attend these events out of sense of duty – as soon as you speak to him it's apparent that he revels in them, that he genuinely enjoys conversing with the widest possible range of paving groupies, from the one-man-band garden makeover specialist to the experienced term contractor, from the entrepreneurial to the earthy.

In the few minutes given over to formal announcements, David revealed that, since last year's shindig, sales in Britain have doubled, and that this is largely due to the commitment and confidence of contractors large and small who have come to appreciate the Tobermore way of doing business, supported at every turn by a professional and personable sales team.

In fact, with the accelerated push into the Scottish market, and the continuing strength and confidence of the Irish economy, the existing Tobermore plant is running at full capacity, so next month the ground will be broken for a new block plant, adjacent to the existing, and next year, a new flag-making plant will be commissioned. These exciting developments are deigned to ensure Tobermore will be able to honour their commitment to providing top quality product without delay, and without compromising their standards. 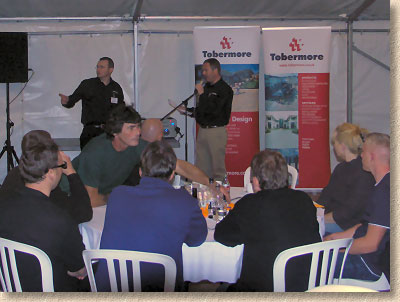 Overall, the evening has to be seen as a great success. The number of guests was higher than even the most optimistic estimate, and every contractor offering an opinion was effusive about the products and the company. There's a sense of 'family' with Tobermore and this latest Contractor's Evening underlined the widely acknowledged fact that they are serious about the British market. This is not a toe-dipping exercise; they've put down roots, they're beginning to grow, and they're here to stay.