Home / About Us / News / Tobermore stake their claim

The first mainland Tobermore Paving Centre threw open its doors to the Great British Public just before Easter, and it's been perfectly timed to coincide with the release of the new 2006-07 Lifestyle Landscaping Brochure. I had intended to review both in the one article, but, as per usual, the words took over and by the time I'd put down what I needed to say, the word-count was over 3,000, and the image count was impractical for anyone without broadband, so I've split the piece into two. This first page will consider the new Paving Centre at Leyland, Lancashire, while the Catalogue review follows on the subsequent page .

The Paving Centre, situated just a couple of minutes from J28 on the M6, on the outskirts of Leyland, (click here for a map) continues the tradition amongst manufacturers based in Ireland to promote and sell their products through these visitor-friendly sites rather than rely on Merchants/Providers. This is the first such site for Tobermore on the British mainland, and while it can't claim to be the first manufacturer-sponsored paving centre this side of the water, it is immediately obvious that this is not the first stab Tobermore have had at developing such an outlet. Everything about the site screams careful thought, diligent planning, considerable experience with the format and a near-faultless eye for detail.

The actual site is attached to an existing garden centre, on a major arterial road (the A49), minutes from a motorway junction, with two thriving modern cities (Prrreston and Blackburrrn) on the doorstep and a population base in excess of a million people within 30 minutes travelling time. Increase that to 45 minutes, which is by no means unreasonable, and the cities of Manchester and Liverpool come within reach, along with big population centres such as Warrington, Bolton, Lancaster, Burnley, St. Helens and even Wiggin!

There's ample parking, although it has to be shared with the host garden centre, and even on a coolish, overcast rain-threatened mid-week day in April, it was nicely busy, even though there's been no grand launch or determined advertising.

The Paving Centre covers around 1,000 square metres, and includes a beefy Samples Store as well as a rather plush Sales Office that will, according to GB Sales Supremo, Mark Law, doubles-up as a HQ for Tobermore's activities in mainland Britain. But what really counts are the paving displays and these are little short of superb, not just in terms of the products, but also in the quality of laying. Yes: with eye's that have previously been compared to those of a shithouse rat, I could find minor faults here and there, but I would have to be in a really foul mood to point them out, and given the mad rush involved in getting the site finished and open in time for the Easter break, I'm pleasantly surprised that such a high standard was achieved. I know that many of the contractors asked to lay the various display areas are regular readers of this site, and I want to take this opportunity to tell them publicly that they have done themselves proud. 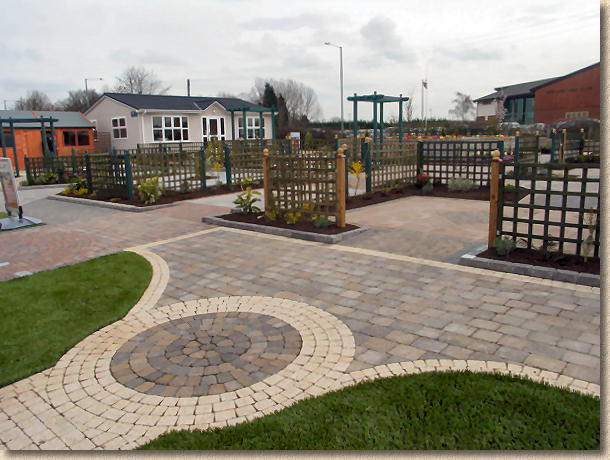 There are, I suppose, twenty major 'panels' of paving, linked by interconnecting pathways of contrasting and complementary products, and loosely separated by mid-height trellis work and simple planting that is at least a season away from looking anywhere near its best. The car-park end of the site is screened from a plant storage area by a two metre wall built using a selection of Tobermore's walling products, and, as with the paving, the quality of the masonry work exceeds that found on many a commercial project. No snots; no splashes, no stains – just top-quality, clean, professional work that any contractor would be proud to claim as their own. 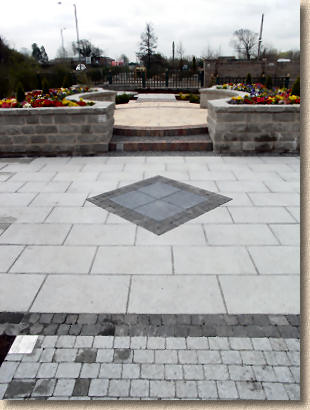 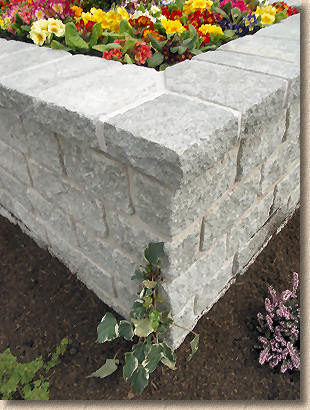 There's no set route through the various display panels; the idea is to wander at will, and as with the very best gardens, there always seems to be focal point drawing you onwards, unconsciously leading you into the next display. In fact, you find yourself re-visiting the same display from a different angle and not immediately clocking that you've already been there. Once the planting becomes more established, the sense of exploration can only be enhanced.

There's a gentle logic to the way products are sympathetically grouped, with most of the natural stone products in one area and the wet-cast diagonally opposite, while the block paving and textured flags flow between the two.

There's nothing to be gained in describing all the various products here. Many are familiar and the one or two new lines will be highlighted in the brochure review on the next page , but it would be remiss not to give a mention to the delightful detailing and the way in which complementary products have been used to stunning effect. There is just so much detail in each and every layout that there is a real risk of being overwhelmed by the possibilities or overlooking a real gem. Edge courses are precise and never dominate the main paving. Inset features are clever and serve to emphasise just how versatile segmental paving can be when a bit of thought is used.

The business model is slightly unfamiliar to anyone who has never visited a Paving Centre in Ireland. No real quantities of product are stocked on site, so it's not the same as a traditional Builders' Merchant where you can drop in and pick up what you want when you want. It's more about design, about getting customers, contractors, designers and architects to use the site as a living, breathing brochure, where products can be seen in natural light, in a real environment, in combination with other products, and with the aid of fully-trained sales advisors, if necessary.

Customers can take advantage of a free, 30 minute consultation with a design professional, to sketch out their ideas, create a shortlist of potential products and help themselves to samples to take home from the on-site sample shed. Once a decision is made, the paving can be ordered for delivery, and there's even a helpful list of local contractors that are familiar with the Tobermore range.

The Tobermore Paving Centre will be staffed 6 days a week: Sunday is the only day there will be no-one on site, and I'm not sure how well this will work. Sunday is, for many people in Britain, the only free day they have with their partner, and over the past decade it's become the day to shop around for those larger household purchases, which has to include a driveway or a patio. Mark Law is right when he says that most people don't actually commit to purchase on a Sunday, but umm and aahh for a couple of days and return later in the week to finalise the deal, but even so, having a knowledgeable sales bod on hand for that oh-so-important initial viewing could be what cinches the deal. 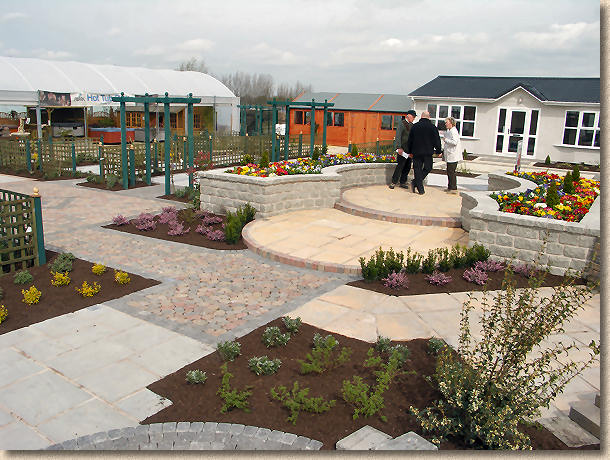 As a resource, the Tobermore Paving Centre is exceptional. If I were still in the contracting game, I'd be bussing my clients up there at the weekend to show them the possibilities and to make sure they truly understood what their paving would look like on completion. I urge current contractors to add a trip to the Tobermore Paving Centre to the “must do” checklist for their clients. It will be a few litres of fuel and a couple of hours extremely well-spent. Designers have a duty to familiarise themselves with the Centre – no true professional can afford not to be aware of the site and its potential as a design guide. And for other manufacturers: look and learn. This is how paving should be sold, and, if my hunch is correct, this is how most quality residential paving installations will be sold in the future.