Home / About Us / News / The block laying robot

The laying of block pavers can be physically demanding and it involves a high level of repetitive actions. These demands are at least partly responsible for the high turnover of operatives in the pavement construction labour force. As shown in the graph below, the number of operatives leaving the trade exceeds those coming in.

Some European governments, along with health and safety agencies, have attempted to ease the workload of the paving operatives by introducing regulations to limit the physical demands of the job, and these manual handling obligations have forced the trade as a whole to re-examine manual laying techniques and to consider alternative block laying strategies, with the aim of improving working conditions for paviors and ensuring they can work through to their eventual retirement with a much reduced risk of injury or accident.

This has largely come about via the imposition of lifting regulations by various governmental and appointed agencies. The key regulation limits the weight of a material that can be manually handled, and the frequency at which it can be lifted or manipulated. In essence, it is not permitted for operatives to manually handle any material or product with a weight in excess of 25kg. This is reinforced by the limitation imposed by some European governments and agencies whereby blocks heavier than 4kg or flags heavier than 9.5kg are not permitted to be laid manually. And after Jan 1st 2007, some agencies are requiring areas greater than 1,500m² to be laid by machine, wherever possible: Local authorities, developers, and other commissioning bodies will not be allowed to insist on manual laying for areas in excess of 1,500m²: if machine laying is possible, it must be used.

The paving industry has had to re-assess its working conditions in the light of these new requirements and this had led to a variety of technological developments in the machine-lay field.

One of the more interesting developments is the Block Laying Robot, known as Streetwise 1200, developed by Robostreet in the Netherlands. This automated installation machine was unveiled at an international symposium that was considering the role of mechanisation in the pavement construction industry and the working conditions of paving operatives.

The Robostreet machine builds on a selection of existing mechanisation techniques that have a proven record of successful implementation in the automotive industry. These various techniques are adapted and combined to create the fully-automated paving robot. Robostreet, as you'd expect, has a full patent on the machine and its technology, and is hoping to bring it to the market in the early part of 2007. 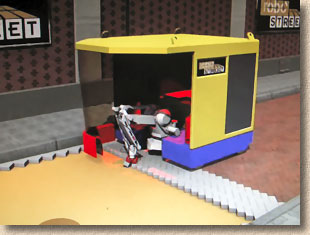 The Streetwise 1200 is a computer-controlled machine that moves along on caterpillar tracks and uses a robot arm to automatically place the paving elements. Only one operative is required to control the robot, using a simple joystick control mechanism to manoeuvre the robot into the starting position for the pavement. The operator imports or inputs the required data into the on-board computer. The size and type of paving elements to be laid, the bond or laying pattern that is required, the width of the pavement, and other necessary data.

Pallets of blocks are loaded into the back of the robot, from where they are picked up by the robotic arm and placed onto the laying course.

The machine relies on GPS and the patented “Vision-System” technology to place each block with millimetre accuracy. While the robot undertakes the demanding physical work of loading, lifting, transporting and placing of the body blocks, the laying operative prepares and lays any edge courses or detailing that is required. 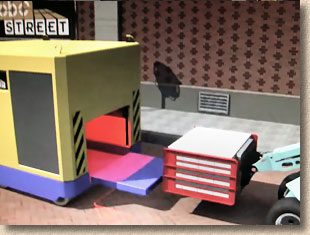 The machine is capable of placing approximately 1,200 blocks per hour, and depending on the size of the blocks being used, than can be as much as 210m²!

The robot can also be programmed to dismantle a paved area, lifting out the individual blocks and stacking them onto pallets for re-use. This facility enables the machine to be used for reconstruction or remedial works. 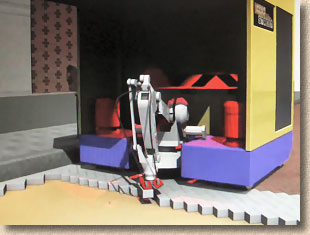 The Streetwise 1200 represents a significant step forward in paving innovation due to three unique features not found in existing machines:

You can watch the robot in action in this animated video

This innovation could lead to a major breakthrough for the paving industry in the Netherlands and possibly elsewhere in Europe and further afield. As with all new technologies, only time can tell, but one thing is certain: Innovation within the paving industry has taken an important step forward.

Article originally written by Arthur Terpstra of robostreet.nl and re-written for the English language by Tony McCormack