Home / About Us / News / The BGS Geological Walk

After two years of recce-ing, rummaging and relentless rock-hunting, the much anticipated British Geological Survey's (BGS) new feature path at their HQ in Keyworth, Leicestershire was officially opened to the great unwashed on Thursday, June 21st, and appropriately for Solstice day, the 130m long, 1,200m² path culminates with a homage to Stonehenge, with an upright Sarsen stone and a reclining Preseli Bluestone .

The BGS has recently revamped its centre of operations on the sprawling Keyworth site and a major part of the new building plan was the creation of a new, paved entrance to the main reception and the possibility to create what is in effect a geological timeline of rocks from all four constituents of the UK: England, Scotland, Wales and Northern Ireland, but as is all too often the case with external works, by the time it comes to implement them, what money was originally available has been frittered away on superfluities such as doors and skirting boards. Consequently, the remaining budget for the proposed paving strongly suggested that somewhere around two-thirds of the paving would be concrete products. 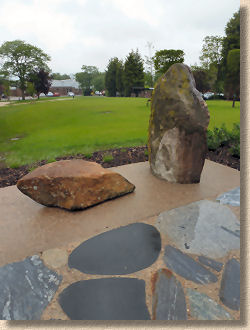 Concrete? Concrete, not Natural Stone? Not native UK stone at what is the home for British Geology? That can't be right, and lucky for us, Michael Heap, MD of stone suppliers CED thought the very same thing, so he took it upon himself to see if he could source all native stone to pave both the main entrance and the timeline.

Of course, the big problem is cost. Natural stone, and in particular the very best quality indigenous stone, is a tad more expensive than, say, tumbled block pavers. Michael had the brainwave of approaching key figures in the quarry business and ask them to support what could be a stupendous exhibition for the rock business in Britain and Northern Ireland.

First on board was Nick Williams from Burlington Stone in Cumbria, who agreed to provide the company's unmistakeable green slate at a very favourable rate. With Burlington on board, it was slightly easier to draft in Welsh Slate to provide their distinctive Penrhyn Plum paving, and then Johnson Wellfield to supply their creamy Yorkstone, and the ball really was rolling. Along come Marshalls , Delabole Slate , Purbeck Limestone, and many others, all agreeing to provide stone at a fixed and very favourable rate in a combined effort by the UK quarrying industry to create a showpiece for native stone.

The main entrance path would feature the Welsh and Cumbrian Slate with divisions of Caithness Flagstone , with huge boulders of the three rock types: igneous, sedimentary and metamorphic, and representing each of the four "home nations". Right at the front of the entrance area is a huge 15+ T block of Lewisian Gneiss from the Hebrides, the oldest rock in Britain and exceptionally difficult to obtain.

all pretty straightforward, you may think. The timeline would prove to be much more of a challenge.

The idea was to create a path that featured stone from every geological period, from the Pre-Cambrian of 3,500 Million Years Ago (Ma), through Cambrian, Devonian, Carboniferous, Jurassic, and right up to the 'modern' era, the Quaternary. We are incredibly lucky in this assemblage of soggy islands on the edge of Europe that we have an embarrassment of rock types stretching from some of the oldest rocks on the planet up in the Hebrides, right through to relatively modern post-glacial deposits that are just tens of thousands of years in age.

However, not all of the rocks found in these islands are quarried, and many of the quarries extracting the more interesting hard rocks from Scotland rely on relatively crude blasting to create loose aggregate, rather than controlled explosions aimed at providing massive blocks for further processing into flagstone or setts, and indiscriminate blasting can cause fissure and fractures in the surrounding rock, making it damned near impossible to find blocks suitable for sawing without them falling apart.

Luckily, The BGS have in their employ one Stephen Parry, geologist extraordinaire and rock-checker sans pareil. While CED trawled those far flung places searching for remnant blocks and anything usable to help fill the gaps, Stephen meticulously checked and verified the age and type. And some of the stuff they found is, there can be no other word for it, simply stunning. There's a white Anorthosite in which Michael Heap has high hopes, while the so-called 'Firebird' Gneiss may well be rare but it's bloody gorgeous.

So, the whole path runs along a continuous timeline formed using yorkstone flags, probably the most 'famous' of the native British paving stones, and consists of rectangular panels of stone from the various ages in a chronological sequence.

Dotted along the path are features such as huge boulders of unworkable rock, including a petrified tree stump and basalt columns from the Antrim coast, as well as benches cut from stone blocks, such as the part-baked chalk also from Norn Iron. There are panels of reclaimed setts from Aberdeen, some lovely knapped flintwork representing the Cretaceous Era, and the very distinctive Kentish Ironstone setts that, for me at least, epitomise traditional paving around Sevenoaks.

In fact, there's just so much to see, no short article such as this can really do it justice. It needs to be seen, and that was the subject of an open discussion session following the buffet lunch. Just how do we make use of this truly wonderful feature? None of us want to see it slowly gather moss and become a forgotten gem. The BGS are open to having a few locals come and see the path for themselves, but aren't able to organise tours or guides. CED, via their midlands depot at Langley Mill (Tel: 01773 769916) in nearby Nottinghamshire are willing to arrange guided visits should there be any interest, but what about the rest of us? What about schools and colleges? What about potential customers?

Well, if any of you are within an hour or so of Keyworth, please, please, PLEASE, make the effort to visit this site and see for yourself the most splendid example of native paving stone ever assembled.

If you are a contractor either looking for inspiration or with a client who is interested in using native stone, visit this site with CED and have your mind blown by the sheer choice and quality.

If you have any influence with schools and colleges, contact the BGS to see if they can arrange an educational visit, and then go and see for yourself what a truly superb educational resource this can be. You could create something similar at your school or college. You don't have to re-create the whole timeline, but just having stone laid out like this helps bring home how long we've had a hard crust on this planet, and just how varied it can be when natural forces come into play.

If you work in the stone industry, either as a quarry company, as a stone- or streetmason, if you're just looking for a change to the usual concrete paving or even if you're just someone interested in stone, this is a resource that deserves a visit.

I know I can wax lyrical at times, but in almost 10 years of scripting these news articles for the website, I have never seen anything as marvellous, as fantastic, as important as this pathway. You can keep your Minnellium Dome; you can stuff your Olympic Swimming Baths up where the sun don't shine; you can let the Angel of the North rust away to nothing. This geological walkway is the most intriguing and impressive piece of public-art-cum-hard-landscaping we've ever seen in this country.

This truly is a marvel of all ages!