When it comes to cutting block paving and other small individual paving units, there's nothing much quicker or cleaner than a splitter. Insert the piece to be cut, align, pull down the lever, and there you go! Can it really be that simple?

Block Splitters, also known as Block Cutters or Guillotines are an essential piece of kit for most professional paving contractors, especially those heavily involved with the installation of block paving . They enable blocks and other small paving elements to be split or cut in a straight line using only manual pressure applied via a telescopic lever.

There is some debate amongst contractors regarding the preferred method of cutting blocks, with some preferring to use a power saw while others opt for a splitter.

In the right hands, a splitter is usually faster than a saw, but requires a greater degree of skill. Using a splitter, a block can be placed onto the machine and split accurately in approximately 3-5 seconds, while a saw will often take 10-30 seconds to cut an identical block, depending on the depth of cut.

Unlike saws or grinders, the amount of dust generated by the cutting is minimal and therefore no dust suppression equipment is necessary to comply with the recommendations of the Health and Safety Executive's guidance on controlling dust when cutting paving materials . This ability to cut paving without creating dust, combined with zero consumption of fossil fuels and no need to change worn-out blades on a regular basis, along with a long service life help make block splitters the best choice for the environment and also for the pocket.

Splitters come in a range of sizes to accommodate different types of materials, from 50mm thick paving blocks to 300mm thick stone slabs. The models used on most blockwork projects have a maximum jaw opening of around 100mm and a jaw length of 300-450mm, while those used to split flags and natural stone tend to be noticeably bigger, and may incorporate a hydraulic jack to maximise the cutting power on thicker, tougher materials. There are even electric versions for those with less powerful biceps.

Most models work by adjusting the height of the jaw opening via a screw mechanism so that the block (or other elements) to be cut just fits between the upper and lower blades and then using the eccentric cam attached to the lever to force the upper blade downwards, exerting pressure onto the block and causing it to snap in line with the blades.

The telescopic lever arm is extended to ensure maximum leverage, making best use of the force that can be applied by a single operative.

The lever is then lifted upwards to open the jaws as wide as possible. There is usually a 'rest point' for the lever that allows it to be safely 'parked' in the upright position while the paving element is introduced to the machine.

The distance between the upper and lower blades can be adjusted by turning the screw mechanism at the top of the machine. This moves the upper blade up or down as required to best accommodate the paving element being cut. Ideally, the gap is set to be just wide enough to allow the block to be placed between the jaws but narrow enough to ensure that the upper blade will 'bite' onto the block once it starts to be lowered by moving the lever. As most paving materials tend to be of a consistent thickness, once the jaw width is set for a particular material, it rarely needs further adjustment until a change of material takes place.

The paving unit to be cut is usually marked to indicate the cut-line and is then placed between the jaws in such a position that the top blade of the splitter is directly over the marked line.

It's important that the block being cut is placed centrally, directly beneath the screw adjuster to ensure the pressure necessary to split the block is evenly distributed across the block surface. If the block was to be positioned to one side or the other, this could allow the free-moving upper blade to tilt and consequently fail to deliver equal pressure across the surface, which would probably result in a failed cut.

Angling, or tipping-back the block between the blades will create an undercut, making it easier to fit the cut piece into the pavement because there is less chance of there being 'snags' sticking out from the cut edge. The block is usually held in this tipped or angled position as the lever is brought downwards until it causes the upper blade to 'bite' the block and so 'trap' it in the tipped-back position.

The operative's hand can now be withdrawn and used to apply further pressure to the lever, sufficient to force the blades to split the unit along the desired line. This can require some serious effort with very hard materials, such as clay pavers.

Beware of damaging the cut block when the splitter snaps it and the two pieces drop to the ground. Some splitters, such as that used in the accompanying photos and videos, have a small 'table' on either side to catch the cut pieces. However, the force exerted by the blades can often propel the cut pieces beyond the tables and if they drop heavily to the ground they can break or spall. An old rug or piece of foam rubber laid beneath or in front of the block splitter can lessen the impact and reduce breakages, but most experienced contractors tend to 'catch' the required piece as it leaves the jaws, while allowing the discard piece to fall.

Cut edges that are slightly oversize can be trimmed with a brick hammer, a bolster or a cold chisel. However, a good operative with a well-maintained splitter will usually ensure that 95% of cuts will fit the pavement without the need for further adjustment. Where a cut piece would require significant trimming, say more than 20-30 second work, it will often be discarded and a new piece cut.

Top quality block splitters feature blades manufactured using high quality steel with ground and hardened edges to ensure a long service life. However, even the very best blades will wear down over time and will need to be replaced. In fact, one of the most common complaints encountered amongst the less clued-up contractors is that the blocks they are cutting are 'not very good' (although they tend to use a slightly different expression!) because they are not cutting evenly, or they are crumbling. One look at the splitter being used often reveals that the blades have never been changed since the day the machine was bought. New blades make a world of difference!

Some models feature blades that can be rotated to reveal a new cutting edge, while others rely on complete replacement of the blade unit. Contractors laying paving on an every day basis will usually get at least three months service from a set of blades, although this can be considerably less for poor quality blades and machines from dubious suppliers/manufacturers. Those contractors that might undertake block paving on a more irregular basis, such as landscape contractors, often find that they get a year or even two from a set of blades.

Whatever the level of use, the blades should be checked weekly to ensure the cutting edge is true, unbowed and relatively sharp. The blades, even when new, are never razor-sharp, but should have a definite point edge rather than have a rounded-off profile.

Apart from the blades, the only other regular maintenance required is lubrication of moving parts. WD40 or a similar penetrating lubrication product is best for this, and it should be done on at least a weekly basis. Contractors using a splitter all day, every day, tend to do this on a daily basis.

So, the screw adjuster is the obvious subject for attention, but also lubricate the pivot points on the lever mechanism, the wheel axles, and the channel which keeps the blades aligned.

While most contractors will usually buy a splitter (costs for new models range from £300 to £2,500), they are also readily available at most hire centres for approx £25 per day or £60 per week. Hiring-in may better suit the occasional paving installer of DIYer looking to construct their own patio or driveway, but it's worth noting that good quality, well-maintained splitters often appear on internet auction sites, and tend to hold their value, so that a splitter bought for 90 quid, used to cut-in a DIY project over the course of a month or two, will often re-sell for 90 quid once the work is finished. 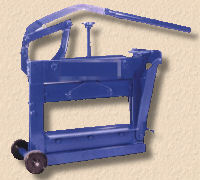 Buying new brings the added security of a manufacturer's guarantee and access to both quality parts and reliable service. The blades will be original and in pristine condition, and the mechanism will be highly accurate. Hired-in machines are usually well maintained, sometimes overly so, with extravagant smearings of grease to moving parts and lubrication oil to thread mechanisms. Care is required that any grease or oil is not allowed to contaminate the paving units.

If buying second-hand, the blades should always be checked. The machine is only as good as the blades, and so buying a splitter with dulled or bowed blades can be a false economy as it may cost £40 to £150 for a replacement set of blades. Also check the lever action, the screw adjustment and the transport wheels. The lever should move freely up and down and the telescope extension should be easy to adjust, with the locking screw present. The screw adjustment should turn with ease: any stiffness may be eased with WD40 or similar, but is often indicative of poor maintenance and grit/dust in the threads. The wheels should be intact (some cheaper, plastic wheels often break or crack) and rotate freely. Bear in mind that large wheels mean easier transport.