A couple of weeks ago, the new products from Marshalls were put under the spotlight and now it's the turn of Posh Marshalls, aka Stonemarket . Here's a brand that never fails to impress. That's not to say that everything they do is a winner – there's a locked cupboard somewhere on the outskirts of Coventry where all the could've-beens are ensconced away from prying eyes, waiting for the moment in time when fashion and popular taste finally catches up with Stonemarket's sense of innovation and adventure – but they do seem to have a better-than-average hit rate.

As many will know, the annual Stonemarket catalogue/brochure/portfolio is as close to a work of art as we get in the paving trade, and that sensibility carries over even to a miniature publication such as this teeny-weeny introduction to the 2012 menu. As soon as you see it, you know it's going to be stuffed with wondrous things, and there's not much more wondrous than native British Stone. 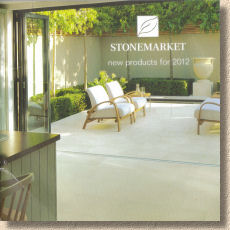 We've had close on 20 years of being inundated with cheap imported stone while all the time, we have some of the best paving stone in the world right under our feet. Three of four years back, one or two of the smaller stone distributors started making noises about adding native stone to their rosters in an attempt to offer something different. At the time, anyone and everyone was flogging Indian sandstone and limestone, Chinese granite and slate, along with crap such as travertine.

Even though the euphoria of the millennium's early years had passed, there was sufficient interest from customers to justify offering native Yorkshire grit, Welsh slate and Pennant sandstone from the Forest of Dean. None were cheap, but they are superb quality stone, traditional materials and hit a chord with the more discerning buyer. 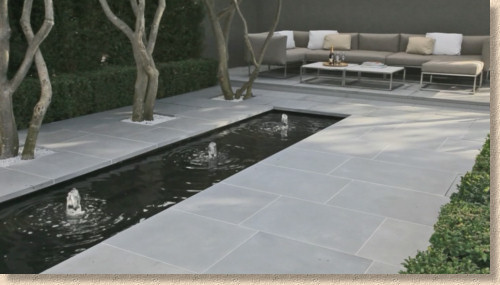 Stonemarket joined the party previously by offering, for example, Scout Moor yorkstone, and now they've expanded their offering by adding a cool blue-grey Pennant stone from South Wales. Gwrhyd , as it's been dubbed, offers a honed fine-grained surface with flecks of darker once-organic material just oozes quality. 600mm gauged width, 38mm thick and random lengths means it can only really be laid in the traditional broken bond courses. An additional width would be the obvious next move, assuming it sells well enough. Very, very classy.

The bog-standard Trustone range is enhanced by the addition of new linear formats. The blurb mentions that linear layouts offer an alternative to the more usual random styling, which is true enough, but the claim that it makes spaces look bigger by drawing the eye works only in one direction.

Trustone Linear format is an interesting alternative that is still not used as widely as it deserves. Given the right design, the right property and the right client, it can look fantastic, but linearity demands perfection in laying. As those who have laid linear paving will attest, any deviation from true is amplified by all those parallel lines, so remember to build this into your pricing. 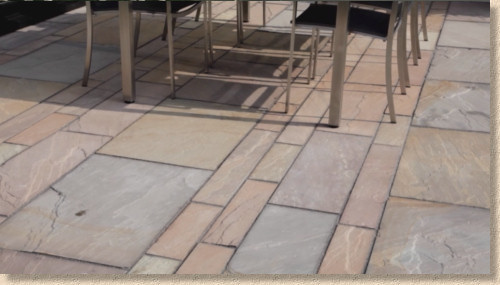 The stone comes in packs of five sizes in various quantities, but no mention of what those sizes might be nor how many of each to a pack. The fact that there are at least three differing gauged widths within the 'pack' the design possibilities are limited. The chance to buy individual packs of a specific width would open up many new opportunities.

Isis , as the name suggests, hails from Egypt and is a creamy limestone with what is said to be a leathery texture. Two shades with marketing names that tell you nowt (Delta sand and Luxor Gold), and sold to be laid in a “random coursed pattern” (is it random or is it coursed, or do they mean broken bond?). No info on sizes, or pack quantities, which is becoming something of a trend with this edition. There's more to understanding a paving and how it could be used than just being shown pretty pictures. We need facts!

There's much trumpeting of a so-called alliance with yet another Marshalls' imprint, Classical Flagstones . The big idea is that CF have access to internal versions of stone that Stonemarket provide for external use and so, those that are inclined that way can have the trendy in-and-out surfacing: tiles in the house that match the flags in the garden. Just why CF have been dragged into this isn't clear, but it may be part of a re-branding as, in earlier days, CF made its name by producing concrete….ooops: I mean reconstituted stone ….versions of natural stone flags which usually cost more than the real thing. I remember a client insisting on the use of a CF Cotswoldy type flag at 60-odd quid per metre when we could get reclaimed genuine Cotswold flagstones for around 45 quid.

Anyway, for whatever reason, CF are being heralded, probably in the hope that some of the Stonemarket magic may rub off, and so there are three products emanating from this incestuous relationship, the first of which is the aforementioned Isis, cut thinner (but we're not told how thin) and sold as Isis Internal. There's a riven slate and then there's the almost inevitable travertine. Actually, and I know this will come as something of a shock to regular readers, I don't mind travertine indoors. In these soggy islands, it's the best place for it, protected from all that harsh drizzle and horrendous sub-10° C nights that make Britain and Ireland so inhospitable for such stone.

The travertine is the Cream colour option, with the “honed and tumbled” finish, while the slated features the sawn edges and riven surface to match the Blue and the Copper Truslate flagstones.

The stylish Avant Garde range is dramatically expanded by the addition of a gorgeous walling system comprising 4 modular lengths of block, corner units and copings all with the distinctive honed finish and bevelled edge, plus a bull-nosed step. No sign of a corner unit for the step treads, but they will be the perfect complement for designs where a change of level is required. Three colour options, Silver, Caramel and Imperial, this is very impressive stone but like many similar-minded products where the walling matches the paving, I worry that, as Karen Young used to sing in my Wigan Casino days, "Too much of a good thing, can turn the whole thing bad".

I worry less when the same material in different textures or finishes is used, but when the walling is essentially a vertical version of the paving, it can lose its impact.

Trustone Paviors are a block format version of the popular Trustone flags. Sawn edges, antiqued surface, two colours (Fellstyle grey or Fieldland brown multi), three sizes for coursed laying, but the largest size (I'm guessing it will be 240x160mm) can be bought in full packs for use as edge courses or, if you prefer, a herringbone layout, which is much better suited to vehicular areas.

Has Natural Stone Block Paving finally arrived? When a certain competitor first brought it into the British market a good few years back, it was given something of a hard time but now it seems that it is an essential component of any comprehensive paving collection. 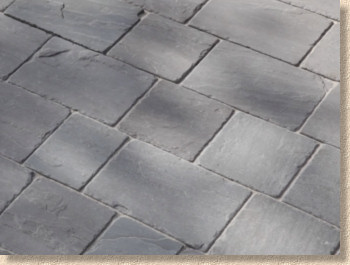 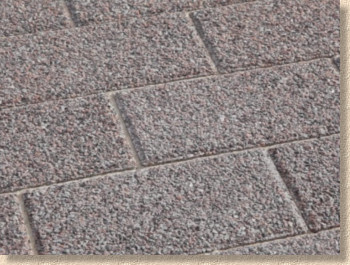 Unity is an exposed aggregate paviors with a granite-like surface. This style has been popular on the continent for many, many years, and almost a decade ago, I spent 18 months trying to convince the notoriously conservative British market that they were a fantastic alternative to the staid offerings we had back then, but I was probably ahead of my time and it's really only over the last 12-18 months that there has been genuine interest in this wonderful form of paving block. Stonemarket are offering three colours, yellow, rose and anthracite, and the one size, whereas the continental manufacturer, even back in 2002, had over 30 colours and a dozen different sizes .

It's reassuring to see that the market has finally caught up with my taste (how long can it be now before it dawns on everyone else that travertine is shite?) and I hope this phenomenally versatile paver takes off. It offers a sense of style that has been missing from the British design palette for too long.

At the other end of the scale, Applesby Antique Autumn Gold is the sort of paver we're more familiar with, due to its crude attempt to recreate worn setts in colours that never existed and textures that are neither one thing or another. A flat surface with deep ham-fisted chamfered edges that will provide a wonderful repository for all sorts of crap and so attract weeds from far and wide.

The only time this type of paving (and there are variations from other manufacturers) looks good is for the first twenty minutes after it is laid. After that, it's all downhill unless you have a penchant for weekly maintenance. I find it a damning indictment of British taste (see above) that Stonemarket feel it worthwhile to produce this fourth colour option to what is an ugly, ugly paver. It's about as authentic and 'distinctive' as the worst of the patterned concrete eyesores that blight the nation's driveways.

So, what I guess I'm trying to say is that I'm not keen. 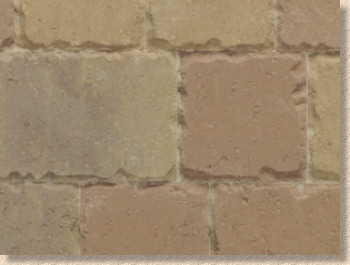 Opera is almost a flagstone version of the Unity pavers mentioned above. It's an exposed aggregate flagstone, available in polished or brushed finish. The polished version is essentially a different colour/aggregate version of the well-respected Perfecta paving from Marshalls' commercial range, while the brushed version is far more tactile with its softly rounded exposed 'pebbles' which need bare feet to truly appreciate. 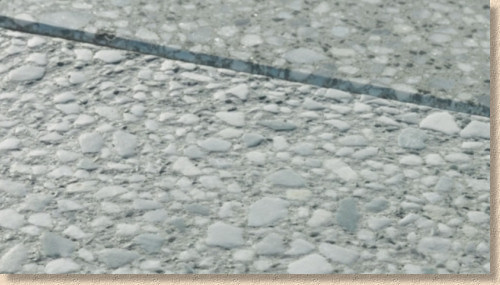 The silver grey colour is very "now" but again, there's a complete omission of size or packaging information, and judging from the images, it's available in just the one, square size, which severely restricts what you can do with it.

The only problem with this product is that it can be perceived as a little too commercial for residential use. Increasing the number of size and colour options would make it far more appealing to its target market.

Finally, we come to a veneer walling, Haus . I know that it is popular on the continent, particularly in parts of eastern Europe, but I can't get past the feeling that is, in effect, a sticky-backed plastic version of natural stone walling. I'm familiar with all the alleged 'pros' regarding cost and ease of installation, but it just doesn't appeal to me. Even the very best versions look innately false and ToyTown-ish to my eye. 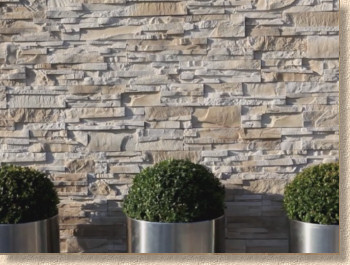 So, the overwhelming conclusion that I take from the smorgasbord for 2012 is that while many in the industry are playing it cool and sticking with tried and tested winners, Stonemarket are, as ever, pushing out the boat and are willing to see what floats and what sinks. Even in good times, 13 new product lines is impressive. It's just a pity there are no Triskaidekaphobiacs at Stonemarket; they could have dropped the Appleby abomination and had a superstition-free 12 new lines which would still have been bloody intimidating to all of their competitors.

I love the Unity and Opera, but I fear their appeal is limited. The Gwrhyd Pennant is gorgeous but the price will scare many. The in-and-out paving is too subject to the fickle flow of fashion, and so I reckon the guaranteed winner from this new line up is the Trustone Paviors. Yes: it's nothing radically new, but it's an idea that has pedigree and when you attach the Stonemarket brand, it can't really fail.