An Introduction to Sett Laying Techniques

This page provides an overview of the two principle methods of constructing pavements using setts. It provides links to pages which go into much greater detail for each method.

The construction of pavements with setts and cubes is a bit of a minefield for a contractor. There's no single way to "do it right" which can be used and more or less guarantee that the pavement so constructed will perform as expected, as there is with, say, concrete block paving or bitmac.

Too many setts pavements constructed over the past 30 years or so have seen some degree of failure. Some failures have been caused by degradation of the jointing, others have resulted from the use of unsuitable bedding or sub-base materials, and more than a few have resulted from sheer bad planning and over-expectation of some designers.

Although setts, cobbles and cubes have a long and glorious history as a paving material, it is only over the last half-century or so that pavements constructed according to time-honoured methods have experienced the sort of loadings that are imposed by modern vehicles and their relatively high speeds. What may have been a more than adequate construction methodology for a horse-drawn carriage travelling at 10 or 12 Km per hour, is not necessarily capable of carrying thousands of vehicles per day, travelling at, say 40 Km per hour, and weighing 20 tonnes or more. 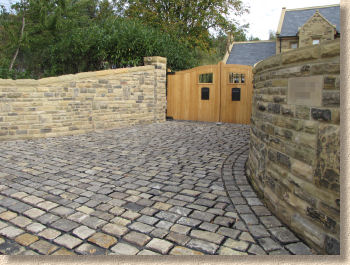 As interest in traditional paving methods and materials is on the increase, some re-examination of the methodologies used to construct pavements from natural stone units has been undertaken and the publishing of BS7533: Part 7 in 2002 did much to improve methods and materials. However, a single, standard construction that would suit all circumstances is difficult to develop and manage; traffic types, speeds and levels must be taken into account, as must the nature of the stone selected as the paving; igneous granites have quite different properties to sedimentary gritstones, and cropped or riven materials behave differently to sawn or honed materials.

Consequently, a design process for sett pavements has been developed and this was published in 2004 as BS7533: Part 10 . This document defines a design process that takes into account most of the commonly encountered variables and aims to guide the designer towards a construction specification that will produce best results, namely a pavement with a generous service life and minimum failures.

Two different construction types will be considered on the following pages:

...plus a series of pages devoted to the different jointing methods used.

While these notes could not cover every possible construction method, they do illustrate the basic principles used on site.

To keep things simple over the following pages, only the term 'sett' will be used, although the same principles generally apply to cubes and cobbles.