Home / About Us / News / GapFast  the next generation

The thing about great ideas is that, once the concept is understood and it catches on, the idea itself just starts to expand into new possibilities and offer new potential. And so it is with GapFast™ , the too-bloody-clever-by-half little spacer gadget that creates accurate and regular joints between paving units.

Last year, we saw the successful launch of the original GapFast spacer which was developed to create a perfect 10mm joint between flags, setts, cubes or blocks. It rapidly earned a reputation for being a genuine boon to both regular contractors, occasional landscapers and DIYers alike. In fact, the idea was so obvious and simple, and it became so popular that you can now buy them direct from a certain DIY shed.

However, behind the scenes, the man with the plan has continued talking to the trade and it soon became apparent that there was demand for a slimline version of the spacer concept, something just a few millimetres in width that could be used for close-jointed paving. I first saw prototypes over 1 2months ago when we looked at the possibilities for using a 2-3mm version to assist in the laying of a tricky stack-bond layout of granite setts. Unfortunately, the manufacturer couldn't churn out sufficient quantities at very short notice to complete the job in time, but the idea wasn't dropped.

And so we now have the slimmer version, measuring just 2.5mm in width, which makes them ideal for use with nibless clay pavers , although there's absolutely nothing to stop them being used with the more familiar blind-one-side clay pavers, as well as with close jointed flags, setts (as originally envisaged), concrete blocks or even kerbs, all of which, despite what you may have heard or read on certain inferior websites, should NEVER be laid butt-jointed, but with a 2-3mm gap which helps prevent spalling. 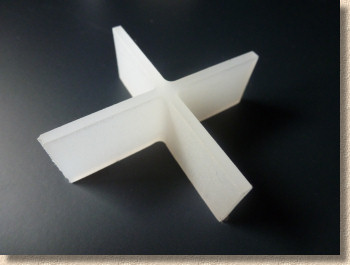 It's such a simple idea, it really needs no explanation. The little spacers are just 45mm high, so sit comfortably within the joint where they will be completely hidden by the chosen jointing material. There are both “T” and “+” versions to aid creation of almost any laying pattern, from fully interlocked herringbone to interlock-free basketweaves. 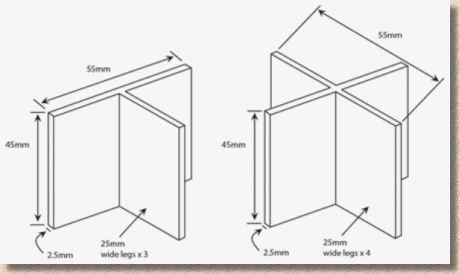 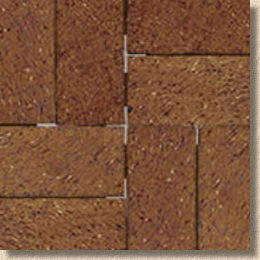 This new version may not be readily available via the usual outlets just yet, but if you need supplies, you can buy direct from the manufacturer – just tell them Tony sent you!