Brochures from several manufacturers with whole-nation coverage have been reviewed on this site over recent weeks so this week's subject makes a refreshing change. Lonstone , the paving brand of Longborough Concrete, are very much a regional player, with a strong, loyal following in their home patch in and around Gloucestershire.

So: what interest is this to a contractor or designer or homeowner in, say, Sunderland or Stornoway who would not, under normal circumstances, have access to Lonstone products let alone the brochure? Well, Lonstone are fairly representative of a number of medium-sized manufacturers dotted around the country, and consequently they offer some insight into what is happening with those companies which focus on the regional level, and give a glimpse of how their efforts compare with those of the larger national companies.

The brochure itself is an impressive publication for such a relatively small manufacturer. 34 full colour A4 pages of glossy paper is not a cheap undertaking, even more so in the current economic climate. There's a HUGE amount of work goes into publishing a brochure of this stature. There are designers, photographers and writers all having an input, then there's the need to stage photo-shoots, tie-in with the marketing people, accommodate the needs and wishes of the stockists, and all while trying to make a living by manufacturing and selling paving. Therefore, what has been achieved here deserves respect. 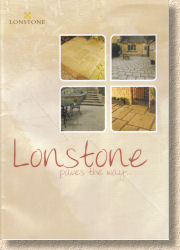 I think it would be fair to say that there are no revolutionary products in the Lonstone range. What they offer is largely regionally-flavoured versions of formats that are seen throughout the country. However, by using colours that are inspired by and matched to the Cotwolds area, and by incorporating locally sourced Cotswold limestone, the flags and walling blocks are exquisitely suited to their intended environment.

On the whole, it's a fairly traditional range, but then, the Cotswold area is a traditional sort of place and it's much more difficult for smaller manufacturers to invest in honing and texturing machinery or to get involved in pressed products with exposed aggregate finishes to suit the more urban tastes of the designer-inspired homeowners. It is predominantly riven-effect and natural-stone styled wet-cast moulded paving with a few contrasting accessories.

Overall the stone-alike pavings are very good and stand comparison with the best efforts of some of the much larger manufacturers. The Manor House flagstones in particular are as good as anything else I've seen amongst the high-fidelity reproductions, and the colours ooze warmth and comfort. Similarly, the brick-alike products such as Regency Tile-on-Edge and Brick Soldiers are good within the limitations of what is possible for reproduction brick/tile.

Some of the circle features are what might be termed 'bog-standard' in that we've seen the format from dozens of manufacturers and it's nothing overly exciting. The quality and colouring is better than many but the format is becoming jaded and sorely needs a makeover.

A couple of products that you won't see everywhere else would be the Mini Cobs ® and the Versailles . Mini Cobs are a mesh-backed 600x400mm panel of recreated setts, albeit just 40mm deep. I know we've seen this idea before, but it's not commonly offered by smaller companies and both the texture and colouring of the Lonstone version is worth checking out. These are a great way to make a cheap and simple sett-effect garden path.

Versailles is an attempt to re-create old wooden setts. Like most other concrete reproductions of wood and timber products, it never quite gets it right, but at least it is something different. The problem with all these "several-units-in-one-slab" products from whichever manufacturer, is that the joints between individual slabs are always more prominent than the fake joints moulded into the slab, and this just serves to emphasise the ersatz styling.

The range of what is termed 'accessories' offered by Lonstone is extensive and impressive. The aforementioned tile-on-edge are a great detail piece, but there are millstones, dished channels, herb planters and staddlestones while the irregular Frog Stones stepping stones are great for informal garden areas.

As with many concrete manufacturers, financial realism dictates that imported sandstone be included in the range. They might not want to sell it and it might not match the company's history and tradition, but if it isn't available, regular customers will go shopping elsewhere. The Lonstone palette isn't particularly extensive, concentrating on just four colours and four sizes, but they are the four most popular colours and sizes for their market in the West of England, so it meets the basic requirements without actually inspiring very much or, more importantly, detracting from the business's core product: concrete paving.

The walling blocks are obviously chosen to complement the paving range and they do that very well, for concrete blocks. I've commented recently about the difficulty I have in finding anything to like about concrete walling, but when viewed dispassionately, the Lonstone Easiwall and Cottage Walling are sure to be just the thing for those of a less pedantic nature.

It wouldn't, I suppose, be fair to expect Lonstone or any other similar manufacturer, to produce comprehensive planning and installation guidance, and that's exactly what we find. A couple of pages giving basic layout options for the modular paving and a key to the arrangement of feature items, followed by a single page of what I would regard as “worrying” installation information.

When you read the line, "Spot Bedding ... will give a more stable patio than the previous method" , it makes you wonder just how bloody crap must be this previous method! 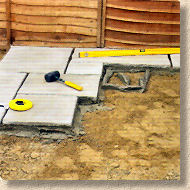 To be fair, Lonstone are manufacturers and therefore installation is probably not their strong point. Also, we don't know which passing horse rider with a large brimmed hat and a six-shooter provided this dubious advice, but it's very unlikely to have come from a professional installer.

Laying suggestions aside, this has to be regarded as a danged good publication when judged against any other manufacturer, regardless of size. The photos are incredibly clear and well-composed without being overly styled. The text is, almost exclusively, relevant to the reader and focussed on the products rather than on nebulous aspirations and lifestyle gubbins. It's not a brochure that will send the imagination spinning with new ideas and inspiration, but if you need to know what Lonstone's products look like, both as swatches and when laid, then this brochure serves more than adequately.

It's a fantastic example to other regional manufacturers of what can be done with a bit of will and determination, a reminder to the larger manufacturers that resting on one's laurels is not a good business strategy, and a prompt to contractors that it's very definitely worth looking around when trying to source good, honest, value-for-money paving. Just because it's a nationally recognised brand doesn't always mean it's your only option.