One of the best things about spring is the arrival of all the new catalogues from the major paving manufacturers. Over the past 10-15 years, the manufacturers have realised just how valuable a well-produced catalogue can be when it comes to selling their products in the all-important Driveway and Patio market, and so we have seen a gradual but definite improvement in quality with each passing season. And, judging from the catalogues that have landed on my desk to date, 2004 is the best year yet!

Stonemarket built their reputation by manufacturing innovative products of the highest quality, and backing them up with a second-to-none sales team. Their 2004 catalogue runs to a whopping 88 pages and features no less than 10 new products, continuing that drive for innovation that is even more important now that we have so many new companies and products entering the market.

The index on the inside cover lists the new products:

Aimed directly at the lucrative garden and patio market, the new catalogue features an archetypal "cottage garden" scenario on its front cover, showing off the new Millstone walling along Cottage Garden Bricks and the ever-popular Millstone paving, with a traditional garden gate hanging slightly ajar, tempting you to wander in and explore further.

Two basic units, the infill stone and the angle piece, allow octagons of unlimited size to be created, when combined with standard Millstone paving units and an octagonal centre.

These are relatively small units - the infill flag measures only 305x365mm, so each consecutive 'ring' adds only 750mm (allowing for the joints) to the overall dimension. 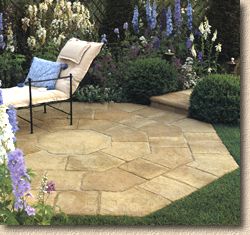 The Hexant tiles take the same idea but apply it to a deep terracotta-coloured paver. These tiles are slightly smaller than the Petite Octant, with the infill flag measuring only 300x345mm, making each 'ring' roughly 625mm in diameter.

Stonemarket have expanded their range of natural stone pavings with these new additions.

The slate comes in two colours, a deep indigo blue and a dark inky-green, and in 3 imperial sizes (24" x 24", 24"x 12" and 12" x 12"), which rather limits design possibilities. The slates are averaging 18-22mm in thickness, which means they will have to be laid on a full mortar bed and NOT the despised spot bedding that is only ever used by incompetents and ne'er-do-wells!

The Trustone range has been established for a number of years, and this year sees the addition of a dolomitic limestone which has been christened "Cotsdale". This stone is a rusty grey fine-grained stone which comes in a generous 8 sizes and features fettled edges.

Note: As it is a limestone, it should not be cleaned or treated with any acid-based cleaning agents, although I can't see this mentioned in the catalogue blurb.

Guidance on laying these stone flags is given on the Laying Riven Paving page.

The Drivestone Paviors are a tumbled paver which bears an uncanny resemblance to the Tegula Drivesett products from Stonemarket's sister company, Marshalls. As such, there's not a lot to say that hasn't been said before, but they are available in 4 colour blends and the usual 240x160mm, 160x160mm and 120x160mm sizes.

However, the Elegance setts, as reported following the GLEE 03 show , are definitely new, and make an interesting addition to the range of choice now available for driveway paving.

They're a funny-looking thing when you see them loose. The base seems to be too big, but that helps ensure that the wide joints are accurately created during the laying process, and that thry can't constrict or narrow when trafficked.

The Elegance Pavers come in two types - the Elegance Setts are 130mm wide and come in 5 different lengths and two colours, Bruges, a sort of greyey-brown, and Vienna, a darker grey. The Vintage Paviors are available in only one size, a more brick-like 65mm wide by 200mm long, and come in 3 colours, Tawny (browny), Claret (deep reddy brown) and Burgundy (light-reddy brown).

One note to contractors and DIYers thinking about laying these blocks - a rubble or neoprene sole on the base of the Vibrating Plate Compactor is ESSENTIAL if you want to keep the good looks intact.

The catalogue reckons they can be laid "in much the same way as normal block paving", which is true enough, but the jointing is another matter. "Normal" sand jointing wouldn't last more than a couple of weeks in these wide joints, so some alternative will have to be used.

I know Stonemarket were in discussion with manufacturers of polymeric sands last year, but no particular company is mentioned in the catalogue so I can only assume no deal was done. There is a paragraph of text right at the back of the catalogue which recommends using a "coagulating limestone grit" but no indication is given as to where this can be obtained. The possible use of a 'resin-based jointing material' is also mentioned, but again, no specific guidance given although there is a helpline number (024 7651 8700) and the offer of a factsheet on request.

Stonemarket's range of decorative aggregates has been further expanded by the inclusion of a crushed brick aggregate, cunningly described as "recycled kiln-fired clay" and sold under the Claydale brand name. There's also a sedimentary paddlestone, described as 'medium coastal' and sized at 150-300mm.

In the walling section, the Millstone Walling, also previewed at GLEE last year, is bound to be a popular item, hence it's position of prominence on the catalogue cover. It will be available in a range of 6 block sizes, allowing a naturalistic coursed look withg 'jumper blocks' to be built, and there's a choice of peaked or hogsback (rounded) coping, as well as a pier cap suitable for 450mm pillars.

As with the Millstone Paving, the Walling is manufactured in Grey-Green and Honey Gold. 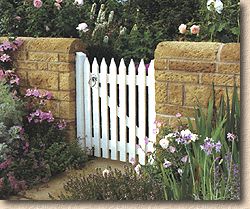 Also new to the walling range are two new colour blends in the Cottage Garden range of clay bricks. Russet, a mellow red blend, and Willow, a more muted orangey-red, complement the existing Rose and Barley colour blends that have been around for a while.

Thanks to Stonemarket for the piccies - more info is available from their website .