German-based pavement jointing mortar manufacturer, Romex , celebrated its 20th birthday in lavish style a couple of weeks ago (so lavish, it's taken me that long to recover!) with a bumper bash attended by several hundred customers, agents, distributors and hangers-on like meself.

The Romex we know in Britain and Ireland is actually Romex PFM (Pflasterfugenmortel - a big, long, compound noun so beloved by the Germans which essentially means Pavement Fixing Mortar), which is but one arm of the larger Romex empire. The company's big performer, up to now, has been the industrial flooring division , but such has been the surge in interest for high quality jointing mortars from right across Europe, that the PFM crowd are threatening to outdo their considerably bigger brother.

And so the invited PFM guests saw representatives from Russia , Hungary , Greece , Sweden , Spain , Ireland , France, the Netherlands and Brazil, as well as a sprinkling of Germans, Austrians, Swiss and probably several more that I didn't get a chance to talk to.

Over a couple of days, the PFM'ers had the opportunity to discuss sales techniques and market strategies in their various territories, compare product results, and generally share their experiences of moving the paving industry into the 21st century with regard to modern jointing technology. For me, the most important thing I learned over the two days was that it is perfectly possible to use the Romex Easy product on wet paving! In fact, some distributors recommend wetting the surface before applying Easy (much as is done with the other products such as D1 and Drain ) and in Spain, they actually use additional water to help wash-in the pre-mixed jointing jollop.

The second day featured a so-called 'Keynote Presentation' by some oaf called Tony McCormack which looked at how the modern urban streetscape has re-discovered quality materials over the last ten years and the role that can be played by resin-based mortars in ensuring a long service life from such installations. For added cruelty, the WAGs of the various representatives were obliged to attend the presentation and listen to your man drone on, although several claimed they had actually found it surprisingly interesting, an admission they never thought they would make about paving. 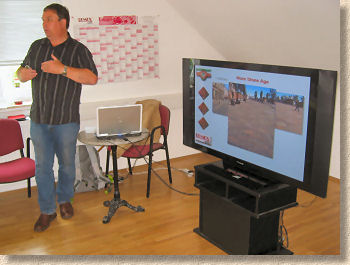 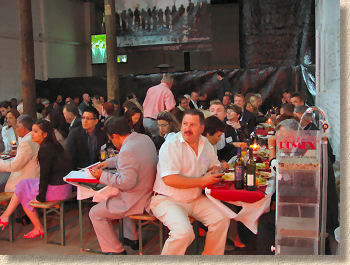 The showpiece finale was a big slap-up beerfest and barbecue on the Saturday evening with a genuinely stunning display of eaglery (like falconry, but with eagles) which saw Romex founder and MD, Rolf Meurer, have a worryingly large Sea Eagle fly to and from his heavily gloved hand. Following his party piece, Rolf graciously invited other eejits guests to risk their arm.

Looking beyond the festivities, Romex PFM has come a long way, and it is reassuring to hear about its use in countries that are considerably chillier (Russia/Sweden) or hotter (Spain/Brazil) than the benevolent climate we enjoy here in Britain and Ireland. Distribution in these islands is now unbelievably better than it was even just a couple of years ago, and compared to much of mainland Europe, we actually enjoy a pretty damned good level of service, with fast response and speedy delivery on almost every order. For the future, there are new products in the pipeline and I'd hazard a guess that for us on the edge of Europe, the very well-regarded Colour Enhancer/Sealer will probably be of most interest and it's hoped we'll see more about this on the website in the coming months.