Inboard cutting is a technique that is used to eliminate small cut pieces at the edge of pavements, and make best use of the paving available. This page looks at its use with flagstones.

This page is part of a series of pages that consider cutting techniques used with flags (or slabs, if that's what you call 'em). The first page examined the basic principles of cutting-in: this page looks at how inboard cuts are used to maximise pavement integrity; related pages consider other cut features such as curves, notches and flagged radii. See the menu above right or the related pages listing at the foot of this page for a more comprehensive guide to what's available.

When cutting-in block paving, we use a technique known as Inboard Cutting to ensure small pieces are excluded as far as possible, and that all the cut pieces that are fitted to the pavement are of a minimum size. A similar technique can be used when cutting-in at the edges of flagged pavements.

The key principle involved in the use of Inboard Cutting is that the competence and strength of the cut pieces and the completed pavement are more important than maintaining the laying pattern. This might not always be acceptable: there are some designers and architects that have, err,....let's call it an "artistic temperament", and for them, the look, styling and maintenance of the laying pattern is far more important that structural competence and if it's one of these silly buggers responsible for signing the cheque, then let them have their way, after warning them of the implications and getting them to sign a waiver exempting the laying contractor of any responsibility for when (not if, but when) the farty little bits and pieces start to break. Similarly, there are residential projects (whether they are carried out by a contractor or done as a DIY project) where the driveway or patio might not achieve the desired 'look' if Inboard Cutting techniques are used extensively. However, being aware of these techniques will enable a more informed decision to be taken regarding their potential use.

So: with the guiding criterion of avoiding pieces less than around one-third of a full flag, let's look at a few examples.

In this first example, a 1300mm wide footpath is being paved using F50 flags (400x400x50mm) in a transverse half bond layout. The back edge of the footpath is fixed by the line of edging kerbs that are already in place. To create a half-flag offset on alternating courses, four block pavers are used. If the half bond pattern is maintained, a 100mm wide strip of flag would be needed to 'close' the course. This is shown on the left hand side of the illustration. However, at only 100mm wide, this piece of flag would be less than the desired minimum of one-third full size (which would be 133mm), but it would also have a plan ratio of 4:1, that is, the length of the cut piece would be four times the width. This brings up a second, subsidiary 'guideline' for Inboard Cutting of flags: any cut pieces should have a plan ratio of less than 3:1, that is, cut pieces should not have a length greater than three times their width. This guideline has its origins in the BS that deals with the manufacture of concrete block pavers and flags.

A second example of an inboard cutting technique designed to eliminate small pieces and farty little triangles involves an angled line of cut and the rotating of a rectangular flag to eliminate said "bits". A fairly common example can be found where a flagged pavement laid in a transverse coursework runs out to meet a kerbline laid at a skewed angle. If the transverse half-bond was to be maintained, the layout would be summat like....

....which results in some pieces that are considerably longer than their width and a number of those undesirable triangles.

The solution is to replace all of those edge pieces. By turning the rectangular flags through 90°, they can span one-and-a-half courses and so eliminate all the long and thin pieces, as well as the triangular pieces that are particularly prone to breaking. In the diagram below, note how all the cut edge pieces now have three moulded sides and are much 'squarer', that is, the length is not several multiples of the width, all of which makes for stronger pieces.

The example shown above uses 900x600mm flags and because of their rectangular shape, they can be rotated from transverse to longitudinal so that the "extra half" is used to eliminate the small pieces. In the example to the left, once the gap between the leading edge of the last full flag and the kerbline reduces to less than 300mm (the difference in size between a flag laid longitudinally and transversely), the flags in that course can be rotated and cut as shown.

Here's a similar example of the principle being used with these delicious red-hued granite flags in the centre of Stirling. The flagstones have been laid in transverse courses 300mm in width, across the breadth of the street, but when the section of paving runs up against a circular feature that cuts across the transverse courses, the orientation of the flags has been changed, turning them through 90° to present the shorter edge to the circle perimeter and so ensure a stronger cut piece and no small, fiddly bits that are likely to come loose in such a busy area. 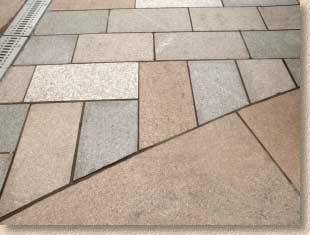 In this example, the flags are F50s (400x400x50mm) and again, they are laid in half-bond coursework that is roughly transverse to the kerbline. As expected, as the courses "run out" against the kerbline, the cut flags become narrower and gradually fizzle out as tiny, fragile triangles that ought to be avoided if at all possible. 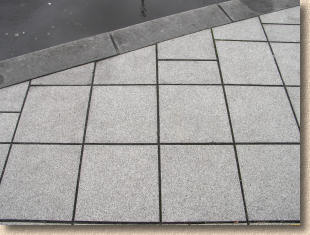 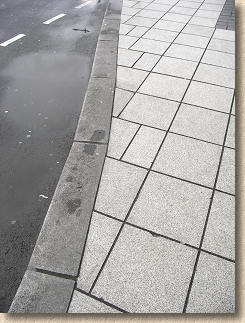 In the example shown above and to the right, granite-faced flags used for the refurbishment of Galway city centre have been laid in a 'stack bond' layout up to a diagonal kerbline of bush-hammered Irish limestone. Rather than use small 'darts' and triangular infill pieces, the contractor has used half-flags that break the bond but maintain larger pieces of flagstone, and thereby create a more professional-looking finish.

As these flags are square, rotating them would make no difference and would not enable the elimination of the smaller cut pieces and triangles, as was possible with the rectangular flags discussed above. The answer is to cut flags into halves and then insert these halves into the layout so that the pieces to be cut are pushed forward and it becomes possible to get rid of the undesirable bits and pieces. A typical layout solution is illustrated below.

While this technique does avoid the smaller pieces, because the full flags are relatively small, the result can look somewhat bitty and disjointed. One alternative that is becoming more popular is to replace the cut pieces completely by using block pavers. When laid with the F50s or the G50s (300x300x50mm), the 100x200mm standard pavers are modular and can be cropped in a splitter quite quickly and simply.

Cutting to a curve

Finally in this section, the use of inboard cutting techniques when paving up to a curve or arc.

In the diagram below, a basic layout for imported sandstone flags laid to a random pattern is being used as a laying guide, and the arc to be cut is marked in red. As can be seen, sticking rigidly to the layout plan results in the dreaded small pieces and nasty little triangles. In fact, the finished result, shown on the right, would be unacceptable.

Obviously, all those small undesirables need to be eliminated, and the only way to achieve that is by removing the small pieces along with the adjacent flags and replace them with a larger flag that spans the removed units.

In the close-up detail above, the large flag "A" along with the small pieces "B" and "C" will be replaced by one full flag, "D", and two other flags, "E" and "F" that will be cut to suit.

Note how the replacement flags have been aligned so that the cut runs as close as parallel to the outer edge as is feasible. This is fairly straightforward when the cuts are close to a quadrant point on an arc (think North, South, East and West) but as the angle of cut approaches midway between two quadrant points (think NE, SE, SW and NW), the flags need to be rotated so that the angle of cut never exceeds 45°

If the alignment of the flags is maintained, once the flags pass beyond the midway point (the line drawn at 45°) they become excessively acute when cut, with the line of cut at an angle of more than 45° to the leading edge, ie, the uppermost edge of the flag.

However, if that flag (shown in yellow) was to be rotated through 90°, the line of cut will be at an angle of less than 45° to the leading edge, which is now the right hand edge of the flag because the direction of laying has been rotated..

In summary, whenever the flags cross the midway line, they should be rotated through 90° in order to ensure that any cuts will be at an angle of 45° or less to the leading edge. In the diagram opposite, the arrows indicate the orientation of the flags and therefore they also point to the leading edge.

This alignment technique is used with all types of segmental paving: flags, block paving, setts, the lot - if they are segmental paving units, this rotation technique should be used when cutting-in to an arc or curve.

In summary, this final section has shown how the layout of a flagged area can be adjusted to eliminate most, if not all, of the small cut pieces and that flags can be rotated to ensure the angle of any cut is kept to 45° or less relative to the leading edge. There will be instances where a flag lying almost exactly on the midway line will need to be cut as a triangle so that the orientation of the flags to either side can be adjusted as required - the yellow flag in the above illustration is such a piece - but this will be just one piece, and it is better to have this one reasonably-sized triangle that allows all the other cut pieces to be of a more substantial size, than to settle for several pathetically little triangles and thin 'infill' pieces.