Over recent years accurately cut stone pavers with tolerances comparable to those of blocks pavers have become more readily available.  This page looks at one particular installation as a case study where they've been laid as a form of block paving.

Whether these are actually block pavers or whether they are truly stone setts is a matter of opinion, but there’s a valid argument to consider them as a specialised form of block paving, and that's how they've been used on this project.

The site comprises a long, curving driveway, climbing a gradient up to the house and parking area where it links in to complementary sandstone flags used to form the access paths around the house and rear garden. The brief from the client was to create a visually stunning driveway using natural materials. 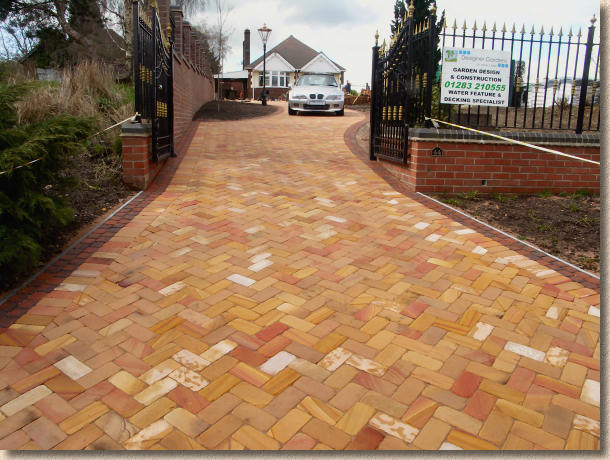 The paving is supplied in crates, each containing 8m² of 200x100x50mm tumbled blocks that are dimensionally accurate. The supplier reckons that the blocks are cut with a tolerance of ±1mm, which is better than the tolerances used by some concrete block manufacturers, and judging from the alignment of this long stretch of paving, there's no reason to doubt this. The block layer reported no problems at all in aligning the blocks: they require no more tweaking than concrete pavers, and considerably less than clays. 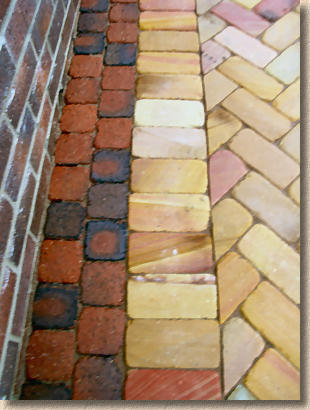 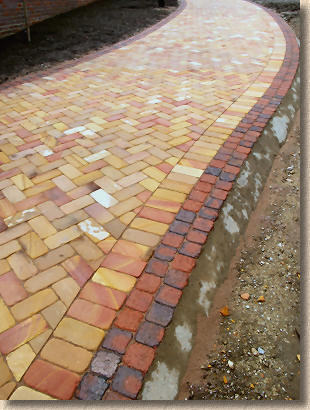 The design used an edge course formed using a double band of red-multi clay cobbles enhanced with a single course of the stone blocks laid as a soldier course. It was felt that a strong contrast was required to help frame the paving and define the edges. One of the unwritten rules of paving design (although it is written in a certain book) is that natural materials work best with natural materials, and a concrete block or a concrete kerb would look totally out of place on this project. The natural colouring and texture of the clay cobbles complements that of the stone paving, emphasising the innate variation in these materials, while picking-up the tones and hues of the brickwork of the adjacent walling.

Note how the edge course construction is exactly as would be used with any other block pavement: laid on concrete and haunched with same. 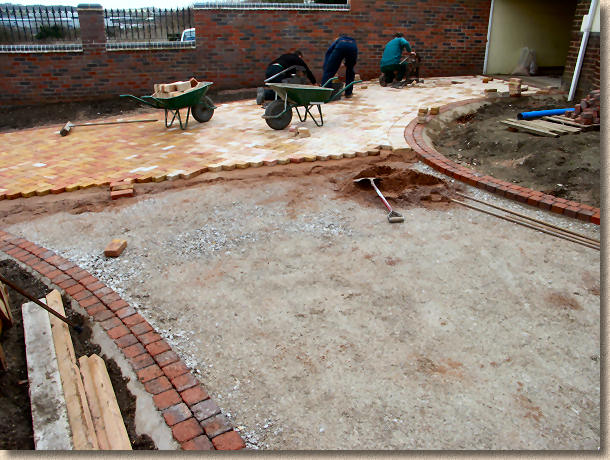 The build-up and construction is also identical to any other block pavement. A sound 150mm thick sub-base of Type 1 material (limestone in this case, given that the site is nestled in the Peak District foothills), levelled and compacted to match the required surface profile of the paving.

The Laying Course is a coarse Class M sand that is screeded to level as per normal. In fact, there are no 'special' requirements whatsoever in the entire build-up: materials and methods are exactly as would be used for any other block pavement.

The blocks themselves are a natural sandstone, sourced in India, and it features a blend of tones including warm buffs, yellows, oranges and reds. The overall colouring is a rich buff, when dry, becoming a stronger yellow-brown buff when wet, as shown in the photos below.

The installer reported that the blocks are quite "thirsty" when newly laid and take a while to dry out after rain, but they aren't at all slippery. Technical information, such as porosity, slip resistance. compressive strength, etc., is usually available on request from the supplier, but for those interested in performance, suffice to say the blocks are more than adequate for any driveway or patio project, and could be used on some types of commercial developments.

Obviously, laying contractors will be keen to know how the blocks handle when it comes to cutting, and I think it's fair to say thatthe installers have been pleasantly surprised by how well they cut. There was a concern that they may not snap accurately in the block splitter, but the surfaces are perfectly cut at the quarry so they're supremely flat and even, ensuring both top and bottom blades have full contact. The stone isn't so hard that you need to bounce up and down on the lever to achieve a break: they snap clean with a firm press on the lever, and the fine-grained nature of the stone means they undercut well to reduce the amount of trimming required. 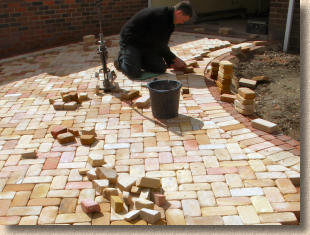 As with any tumbled product, there are always a few blocks that have been 'over-tumbled', and have corners that are so reduced in the process that they would almost use a full bag of jointing sand to make up the gap. The installation crew set aside the handful of such blocks as they come up during the laying process and reserve them for cutting-in. This makes best use of the materials, and also ensures there are no nasty gaps in the main pavement. 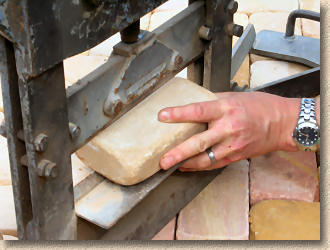 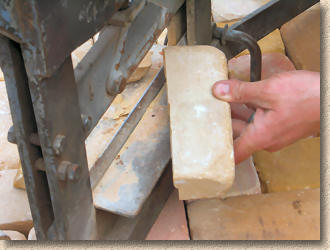 Even long-axis cuts are no problem. As any experienced contractor know, long-axis cuts are a bloody nightmare and many contractors will resort to the cut-off saw rather than spend time bouncing up and down on the splitter only to have the damned block shatter or spall. Yet this installerr found that time after time, these stone blocks cut perfectly along the long-axis, with almost no wastage, and so radial soldier blocks (such as those shown opposite) can be cut in the splitter as required to ensure no gaping joints in the completed paving. 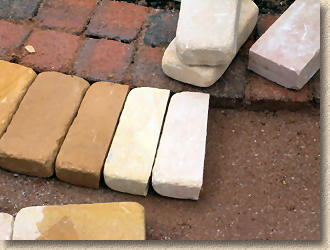 As you should expect by now, there are no problems to report regarding the jointing and the consolidation. Once laid, the blocks take a little more of the kiln-dried jointing sand than would a standard 200x100 concrete block, but that's only to be expected because of the tumbling and the distressed corners. The laying gang were finding a 25kg bag was jointing approximately 10-12m², and that the sand was flowing freely into the joints during brushing-in.

The plate compactor was no trouble either, rattling the blocks and settling the jointing sand perfectly. There was some question regarding whether a neoprene sole-plate should be fixed onto the plate compactor, but a simple bit of trial-and-error on the lower slopes showed that the plate was travelling cleanly over the blocks without marking or scratching, and so the whole drive has been consolidated in that manner. The only real challenge was the gradient of the driveway: the plate was much happier travelling downhill!

Since first seeing this product, I've been itching to see it laid to a real job and now that I have, I am in no way disappointed. The blocks are drop-dead gorgeous, which is what will sell it to the clients, but from a contractor's point of view, the quality of the stone in terms of dimensional accuracy, cut-ability (is that a real word?), ease of laying and all-round performance, I think it's fair to say my expectations have been exceeded.

It should be noted, however, that in common with most other imported sandstone pavers, whether they are flags,s etts or cubes, the porosity of teh sandstone makes them highly attractive to algae, mosses, lichens and other vegetation. Left unattended, these pavers will discolour over a season.

This is easily countered by regular cleaning , treating with a good quality biocide or weedkiller, and/or using a top quality sealant suitable for sandstone to reduce the potential for colonisation by vegetation.

Still want to see more? Extra pictures can be viewed on this page