Glee 2005 has been and gone, and another three days of chatting, chinwagging and chewing the fat with manufacturers and retailers great and small is over and done for another 12 months. Some of the familiar faces were missing but there were a good number of new faces that needed to be given the once over to see what they have, and assess how it might fare in the British market.

Glee is a huge event, encompassing all the various sectors of the garden and leisure industries, and while many of us think that the world revolves around paving and hard landscaping, we are but a small group in the grander scheme of things, and those exhibitors that warrant our attention have to be picked out from among the pots, playhouses and peripherals that clutter up the place. A rough check of the exhibitor list reveals there are around twenty stands that will need to be visited over the course of the three days. Some are well-known names while others are new; some will involve a three-minute chat, while others will take up three hours or more. That's one of the great mysteries of Glee – where do those three days go?

As ever, I've tried to pick out the new products, and specifically those new products I feel “have legs”, that is, those that are likely to be with us for a few years to come. There is, inevitably, a number of products that will disappear without trace before Glee 2006 comes around; some of them deserve to disappear (indeed, some should never have seen the light of day in the first place!), while some will founder simply because they are misunderstood or just to damned clever for their own good. It was refreshing to meet a few of the Brew Cabin Irregulars at the show, along with a couple of dozen or so other friends of Pavingexpert, and I look forward to hearing their thoughts and opinions by 'phone and email over the next couple of weeks, but for now, here's what I thought….

My first port of call, because they were right beside the door and they always make a good cup of tea, was Longborough Concrete's Lonstone stand. They've gone for a much bigger 'patch' than usual, and in a much more prominent position, and it would seem that it paid off, for there was hardly a quiet moment for them over the whole three days, and Ian Williams declared himself to be very happy with the interest shown and leads generated. 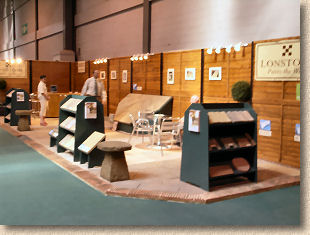 The stand made good use of the area available, with generous displays of their wet-cast products and their new line in imported paving. One of the facts of the paving supply business nowadays is that it is mandatory to have a range of imported sandstones, even if that's not really your core business: if you don't have them, your loyal customers will take their business elsewhere, and you'll lose not just the stone sale, but the wet-cast sales too. Lonstone have a standard selection of the more popular products. Nowt fancy or ground-breaking, but just enough to satisfy the needs of the average punter.

On the wet-cast side of things, though, a couple of interesting new products; the Mini-Cobs, a mesh-backed reproduction sett paver, and the much larger Octet feature. Again, neither is radically new to the industry, but they do represent an extension of Lonstone's range of better-than-average quality wet-cast products.

Refreshed, re-fuelled and inspired, I toddled across the aisle to find Bowland's stand displaying a selection of old favourites and new offerings that they hope will entice the patio-buying public. Bowland have a business plan that is based on a number of regional licensees, each manufacturing from a range of Bowland moulds, tailoring the products to suit local tastes and taking advantage of local aggregates. So, it was good to see inter-regional co-operation with James, Bowland's Friend from the North, (well, Macclesfield) helping Julia (from Bristol) to field the enquiries regarding their products. 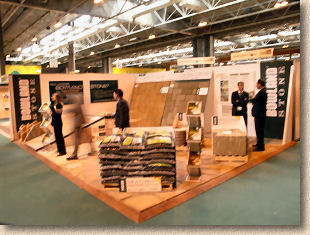 The Patio Kit idea has been taken up by more and more manufacturers over the last few years, and I particularly liked the clever way in which Bowland had linked an unopened North Star kit with a three-quarter-completed layout, which helped explain the concept in a straightforward way.

Looking at their new 'standard' flags, the Lakeland Plum flagstone, which comes in 3 sizes (600x400, 400x400 and 200x200mm) and picks up on the plum-purple colour that attracted a lot of attention at last year's show, was tucked in beneath a patio table and chairs, making it hard to photograph for this review. The wet-cast market is flooded with buffs, browns and grey-greens, so it's good to see products exploring 'alternatives'. However, it's hard to form a proper opinion with the limited area that can be shown at these shows, and the orange-yellow artificial lighting doesn't help, so it will be interesting to see patios using this flag laid out in the open air. Julia tells me they have a large display area down at the Bristol plant, so I might call in for a nosey when I'm down there next week.

Also catching the eye was the French Limestone, which comes in 5 sizes and has a soft, creamy-ivory colouring. These very light colours do seem to have become more popular over the last few years, but I find they need a strong contrast to make them look their best: perhaps using the terracotta-coloured Bowland Border Tile or even the charcoal Victorian Setts would create that contrast.

Just around the corner, Living Stone , who in a previous incarnation were the Lincoln posse for Bowland Stone, had also treated themselves to a much bigger stand, more than twice the size of last year's inaugural display. The back wall was adorned with three of their circle kits, while the floor space was used to emphasise their packaging and marketing promotional materials.

Managing Director Phil Moss told me they'd had a very good year and believes this is due to their strong focus on serving the garden centres and making it ever easier for the smaller retail outlets to stock and sell hard-landscaping and aggregates. This "commitment to retailers" became something of a theme over the three days at Glee, and was a mantra used by several of the exhibitors. While accepting that Glee is primarily targeted at such retailers, and garden centres in particular, I couldn't help thinking we shouldn't forget that it's the end-users, the home-owners and the contractors, that make the crucial decisions as to whether a product sells like hot cakes or languishes behind the compost gathering dust for 12 months. 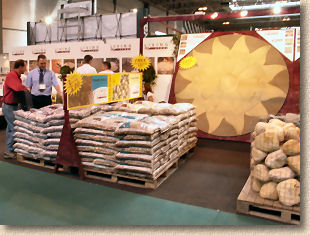 However, I've no doubt that Living Stone's business plan is bringing them success and they do seem to be popular with the retailers, so we should recall that without happy retailers, there'd be no even-happier contractors and clients.

In amongst a host of new products, not least their expanded range of decorative aggregates, I picked out the Cobble Mat, which everyone seems to have produced this year, while Phil claimed the new riven-effect "Lincoln" flag was his personal favourite, as he was heavily involved in its development and Lincoln is their hometown. It comes in a colour described as "Weathered Bronze" and as a 600x600mm unit. Personally, I'd like to see at least two more sizes, so that the design possibilities are expanded, but perhaps that will come about once its proved itself on the market.

I'll round off this first section looking at the smaller wet-cast manufacturers with a new face at Glee, . Several months ago, a rather intriguing catalogue of patio paving, walling, copings, block pavers and much more landed on my doormat. What struck me first was that the text was in Polish, and I could make neither head nor tail of it. There was a covering letter asking me to take a look and consider whether such a varied range of concrete products would attract interest in the UK.

Fast-forward to September and I repeatedly stumbled past this stand for a couple of days, looking at the strongly terracotta-coloured flagstones, the distinctive shot-blasted block pavers and the retro-looking exposed aggregate 450mm flags, thinking that they somehow seemed familiar yet I'd never heard of this company, Market Stone.

When it comes to new products, and especially new companies with new products, I like to take my time, having a look from various angles, and returning for a second, third and fourth look before allowing the ever-eager sales personnel to bombard me with their spiel. I want to have an opinion of my own before I give them a chance to foist theirs upon me, and I want to get a feel for how products might work, how they'd combine, contrast and blend with other products before putting the poor sales rep onto the rack and subjecting him or her to my interrogation. 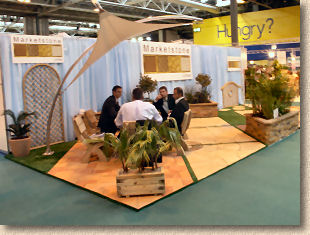 So it was late afternoon on Day 2 before I accosted the chaps on the Market Stone stand. It turns out that they are essentially one British bloke, who was busy on the 'phone and whose name I never got. He is importing the products from Bruk-Bet , the Polish company whose catalogue I received all those months ago. While Mr X continued his conversation on the phone, I had the pleasure of chatting with Robert Zlotnicki, the Polish export manager for Bruk-Bet who turns out be a big fan of the Pavingexpert website, and the person responsible for sending me that catalogue. So that's why everything seemed familiar!

The wet-cast range comprises good quality flags, tiles and dry-stone effect walling blocks all with very strong colouring, but it was those block pavers and the exposed aggregate flags that really attracted my attention. The blocks on display were relatively small, with a compelling shot-blasted texture that both reveals the granitic aggregate and produces a surface that glistens in the light. The exposed aggregate flags come in a generous selection of colour blends, with both angular and rounded textures. I know they won't suit everyone's taste, but I was pleased to see something distinctly different to anything else on show.

At this moment in time, Market Stone aren't sure of prices. They're gauging the market, determining the level of interest and getting a feel for what sort of money they should be charging, but I hope to hear more before the 2006 season kicks off next Spring.