Hard on the heels of Britain's lacklustre Interbuild show, Ireland staged its own underwhelming and under-attended building trade show last week. Hosted at Dublin's cavernous RDS in the upmarket Donnybrook part of town, the Plan Expo event can be interpreted as a thermometer on the forehead of the Irish construction industry.

In recent years, it has sometimes appeared that the subject is running a fever, with an ambitious National Development Plan building motorways to all points out of the city, house building on every patch of undeveloped land within 100km of Dublin, and a rampant economy, but the last few months, and in particular the last few weeks, things have taken a serious turn for the worse, plunging perilously close to hypothermic conditions, and this show revealed better than any MRI scanner just how poorly the patient has become. 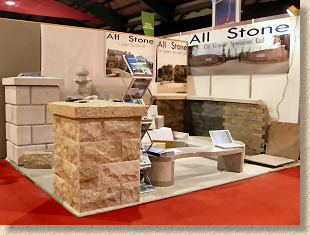 Given the breadth of the building trade, the hard-landscaping sector was reasonably well represented, particularly by the natural stone boyos, which has more of a tradition in Irish building than is the case in Britain. Although All-Stone's display was a case of 'lights on but no-one home' all other stone exhibitors were doing their best to stimulate interest, even though a couple of them were still assembling their displays a couple of hours after the doors opened on the first day.

The big exhibitor for our trade was Kilsaran Concrete Products . With a brand new 20 million Euro plant above at Dunboyne, Co. Meath, they really needed a showcase for their ever-expanding range of products. The display itself was a simple chessboard layout of light and dark 400x400 preseed concrete flagstones, and the uninitiated might have seen only that, but closer examination reveals that there is an impressive range of finishes and textures amongst those duo-toned flagstones. Polished, shot-textured, standard, chamfered, exposed, etched and even one they describe as “curled”, which affable sales executive James Christian explained was perhaps easiest described as an exceptionally aggressive surface texturing which exposes are larger-than-normal coarse aggregate within the high-quality face-mix. It shows up better on the darker flags, and does give the units an exceptionally worn look. Careful selection of matrix colour and contrasting aggregate could produce some visually stunning products, and it's one of those items that tantalise with possibilities. 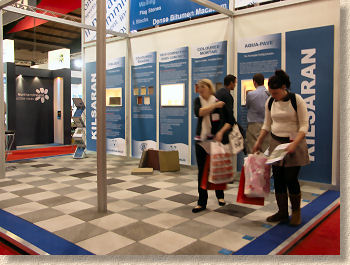 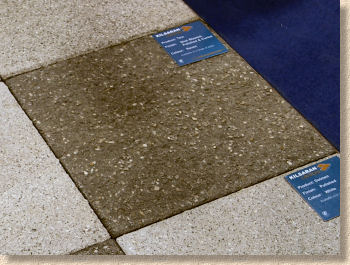 While Kilsaran products aren't really known in Britain (other than by the Irish lads working on that side of the water), they are a well-respected brand in The Republic, especially on their home-turf around Dublin and Leinster, where they are rightly popular with contractors and specifiers alike. No other concrete paving manufacturer had troubled themselves to attend, giving Kilsaran a free run at an admittedly sparse audience.

Resin-based surfacing was just beginning to really take off in Ireland when the country was unceremoniously plunged onto the cold bathwater of economic reality. Hopefully, the versatility and longevity of both resin-bonded and resin-bound varieties will enable them to continue winning both admirers and contracts over the next few years. For the resin-bonded option, SAP Landscapes of Maynooth were flying the Addastone flag, with a display that seemed eerily familiar, having come more or less direct from the Interbuild bash just a week previously. Meanwhile, the resin-bound side of the trade was ably represented by Tarways , all the way from Lisburn, they being the appointed SureSet installers/distributors for the island. SureSet sales director, Victoria Newton, had even flown over from deepest darkest Wiltcestershire, only to reveal that after a decade at the helm, herself, life-partner Andrew, father-in-law Michael, and the rest of the family are being transported to Australia at the end of the year, having done a deal to sell up their interest in SureSet UK, but with plans to do something similar in the antipodes. SureSet as a company, and Victoria in particular, have supported the pavingexpert website over a number of years, and I can only hope they have as much success in Oz as they deserve.

Irish Aggregates are one of the largest distributors of construction and decorative aggregates, but this event saw them focussing almost exclusively on products for dashing, the decorative rendering of walls, which is phenomenally common in Ireland, particularly for rural homes. They did have some 'standard fare' decorative aggregates on show, but tucked away in a corner, and the staff seemed more intent on completing the construction of their stand rather than answering questions, so I left them to it.

Norman Emerson are probably best known in Britain through their range of bagged decorative aggregates which they supply to various independent builder's merchants and garden centres. In Ireland, they've expanded their range to include natural stone paving, and I daresay some of that might find its way onto the British market over time. While they do have the usual Indian sandstone/limestone offerings in flag format, they also have a rather nice lightly bush-hammered yellow granite from China. 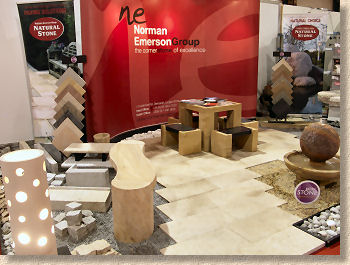 Now might not be the best time to push into the patio/driveway market, but it seems they've not been daft and over-committed the company to huge stocks of barely-profitable lines. Despite the economic gloom, their will continue to be a level of demand for good quality residential paving materials, and there is a logic to having a broader range when times are tight, so that you can attract customers that might otherwise spend their pounds and euros elsewhere. 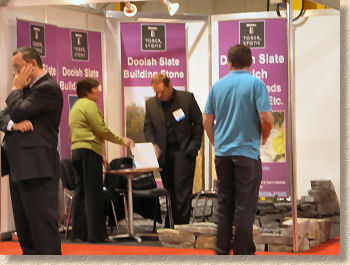 Tober Stone , from Co. Donegal, would not be of the same scale as Emerson, and it was slightly surprising to see them at this show. The product range is nowhere near as extensive, based largely on Dooish slate, as walling blocks and as 'slate mulch'. It's a lovely dark charcoal colour, with a relatively coarse grain size for a slate, but I'm not completely sure about its suitability for areas subject to vehicular traffic. As a building stone, it's wonderfully evocative, being used in north-west Ireland for several public buildings as well as private homes, where it endows an unmistakeable brooding authority to any structure.

Stone Mad are typical of many of the smaller stone distributors servicing the construction sector. They have an attractive selection of native and imported stone, both for walling and paving, with a particularly eye-catching limestone that originates from near Ballinasloe in Co. Galway. There's a tendency to think only of the Kilkenny Blue when considering Irish limestone, and while that distinctive stone is undeniably gorgeous, there are many other limestones that don't receive as much attention, and this would be a prime example. Good fossil content for contrast and a fine grain size combined with the dark colouring in its riven form should see this stone attract a wider market.

Doublel are a new name to me. Based at Rathcoole in Co. Dublin, they claim to supply both granite and concrete construction products, but their display was largely based around native sandstone and limestone lintels, cills and mantelpieces. 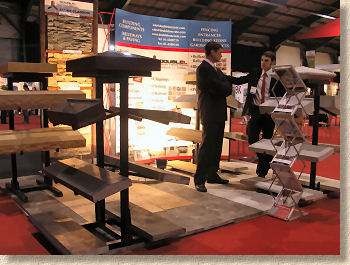 They were also showing a basic range of mesh-backed 30mm deep granite setts in 500x500mm panels. These are common enough in Britain, but seen less often in Ireland, and I'm certain there is good potential for them, as long as the installation is done correctly. I'm less certain that Double Ell are fully clued-up on how they should be laid, as a couple of the comments made to me resulted in a fairly sharp intake of breath.

Fortress Stone claim to supply "anything and everything in stone". Their stand seemed to focus on fireplaces and 'reconstructed stone', which would normally see me sail past, but a video being played on a large plasma screen caught my attention because it was all about stone sealants, a subject that comes up with monotonous regularity both in The Brew Cabin discussion forum and in emails. Fortress Stone have got their hands on an Australian product by the name of Dry Treat , another of the new-ish generation of what are known as cationic fluoroploymers, which are probably best thought of as 'liquid teflon'. They are completely invisible when applied to stone, and allow it to 'breathe' but simultaneously protect it from stains of all sorts and even from penetration by water.

These fluoropolymers are being applied to some of the more upmarket paving products before they leave the factory: Charcon's wonderful StoneMaster paving would be a prime example, and it can only be a matter of time before certain other large manufacturers release products pre-treated in the same manner.

And that more or less sums up all of the exhibitors that would be of any interest to the hard-landscaping community. To be honest there are a couple that have been missed out because their involvement to our trade is tangential at best, their product range very small and specialised, but mostly because the sales reps couldn't manage to get up off their arses to talk.

I find this both surprising and disappointing. Had this been the fag-end of the last day, I could understand personnel being dog-tired and desperate for the show to be over, but this was the morning of the first day, at a show that was struggling for visitors, and I don't think it unreasonable for exhibitors that have paid several thousand Euro for their space at the show to expect their staff to make a bit of an effort. Maybe the disillusionment with low visitor numbers had robbed them of any enthusiasm, but then, many other exhibitors were making the best of a fairly bad show.

Good trade shows need interested visitors and enthusiastic exhibitors. Although I was only there for the first day, it seemed to me that the lack of the former was having a negative effect on the latter. When a show fails to attract an audience, the focus of blame often lands on the organisers but in this case, I suspect it is the catastrophic implosion of the Irish construction industry that is the real culprit. With building workers accounting for more than half of last month's rise in unemployment in the Republic, bringing the total to a level not seen since 1997, it's not the best time to be running a construction trade show.