Home / About Us / News / New facility for AggInd at Ashington

New facility for AggInd at Ashington

New facility for AggInd at Ashington

There's been a buzz of excitement for most of this year following the decision by Aggregate Industries to have a re-shuffle of their already strong hand of cards and put a fairly hefty stake on building a brand spanking new facility up at Ashington in north-east England, around 15 miles north of Newcastle. Traditionally, this has not been a well-represented area for any of the AggInd (or should I now refer to them as "Holcim"?) brands, but the acquisition of Ashington-based EJ Stone last year gave them a much-needed foothold in the region, and then the goings-on at StoneFlair combined with the need for additional manufacturing capacity for both Charcon and another new boy, Durapave, it made sense to lay out all their cards on the one table, and have just one site that could manufacture both wet-cast and CBPs.

So, with a bit of local knowledge from Commercial Manger, Neil Cox, they lighted upon a prime site just off the A19 dual carriageway on the outskirts of Ashington, and decided to place a stake of several million quid on building two plants on the one site: a 5 million quid state-of-the-art CBP plant and a further £1.5 million for a fully-automated wet-cast facility for the StoneFlair range.

For that sort of dosh, you hope to have a strong hand, and from what we saw at the grand opening last Friday (28th October 2005), there are at least a couple of aces in there, and a strong suspicion that there could be more.

The invited guests were treated to a full guided tour of both plants, and for me, it was a bit of a treat to see a manufacturing set-up in pristine condition. I'm more accustomed to seeing them when they're covered in dust, oil and stray concrete, so a bright and shiny system is something not to be missed. In parties of eight, we were decked out with hard hats, hi-vis vests and high-tech hearing aids that allowed the 'tour guide' to speak directly into our ears above the background noise of the working plant. 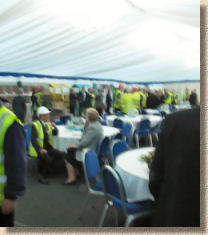 The first part of the tour took in the Charcon CBP plant, which, for those of you interested in that sort of thing, uses an Omag press, finger cart and curing chamber, with feed systems by McCrory Engineering and a four-colour powder dye/additive batching and counterflow mixing system from Haarup . Output should be around 1 million square metres per annum. During the tour, a standard 200x100mm block was being produced, but the line includes a washing operation which gives them the capability to manufacture washed exposed agg blocks, and there are plans to fit a tumbling drum in New Year. 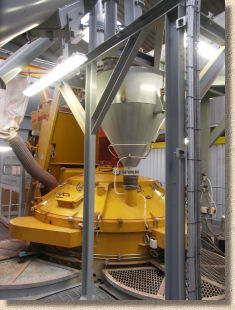 The plant will work its way through a whopping 20,000 tonnes of cement each year, all of which is stored in three silos, two for OPC and one for a white GGBFS that allows much lighter colours to be produced. Speaking of those colours, the dyes are in powder form and they expect to use 500 tonnes pa in four colours: black, red, yellow and terracotta. Aggregates for the CBPs are a 6mm whinstone sourced from local quarries, a coarse marine sand and a finer building sand. These come in from external silos and are then fed into the elevated pan mixer on the second floor via a climbing hopper. Next to the main mixer there's a smaller second pan mixer that will be used for producing face-mix concrete at a later date. Once mixed, the semi-dry concrete is dropped onto a conveyor system at first floor level and from there, fed into the pressing plant.

The StoneFlair plant is a separate building and, at this early stage in its life, looks surprisingly empty with the automated wet-cast line taking up less than a quarter of the floor area. However, the ability to expand and install additional machinery at a later date is critical – there are plans to commission a walling plant in the immediate future. The actual machinery is fully automated, so no need to have operatives trowelling-out the concrete when it hits the moulds. In contrast to the CBP plant, the wet cast line uses a liquid dye to achieve the required colour blends. 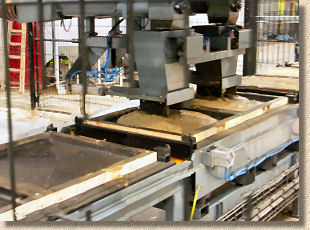 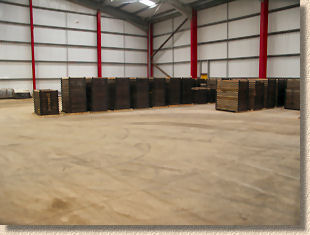 Following a 24 hour cure, the moulds are emptied and the flags palletised and shrink-wrapped ready for despatch. Production is expected to be around 17,000 tonnes of the various products each year, based on working a single, 8 hour shift, with the possibility of adding a second shift if demand warrants it.

The promised walling line will soon help fill the cavernous hall and make it seem much less spacious but there should still be plenty of room to ensure they don't need to struggle for a good few years to come.

Following the tour, we were primed with Champers and Buck's Fizz (the drink, not that awful pop group from the 1980s!) ready for the official opening by Agg Ind's Chief operating Officer, Bill Bolsover, and the Duchess of Northumberland, both of whom flew in by helicopter that landed on the exit route from the car park, cleverly preventing anyone escaping before the formalities were concluded.

That the plant will be a success is beyond doubt - you don't get to be a company the size of Aggregate Industries/Holcim by making bad business decisions, and while it's good to see a wet-cast producer with a national presence make their base in the north of England, the presence of a new CBP plant in an area that's not previously been particularly spoiled for choice when it comes to block pavers is a real god-send and is bound to offer the contractors, and the designers/specifiers/architects, of northern England a much more comprehensive palette of products in the years to come.

Speaking of that palette, we were given a sneak preview of some new products destined to hit the merchants in the new year, and there's a couple that you really ought to keep your eyes peeled for – a lovely washed exposed agg block in the Andover range that will be available in three colour blends (charcoal/graphite grey, a silvery granite grey, and a lovely creamy ivory blend) and six sizes, and a range of small element flags manufactured from recycled materials, that will be sold under the "Eco" title. This range will be supplied on palettes of recycled timber, wrapped in recycled polythene shrink-wrap, with promotional literature printed on recycled paper. More details on these exciting new products (shown below) will be available on this website later this year.

Finally, a round of applause is called for as Charcon were named Construction Product Manufacturer Of The Year at this month's Contract Journal awards in recognition of their efforts in producing the sorts of materials we need in the construction industry of the 21st century, notably the K-Lite kerbing system, the Permavoid sub-base replacement SUDS system, and the aforementioned Eco range. 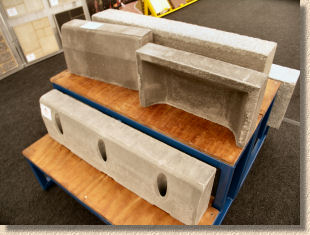