This page considers the methods of constructing flexible or unbound pavements using setts. Flexible pavements have loose, unbound bedding, usually sand or fine aggregate, and similar jointing to create an unbound or flexible surface on completion.

Flexible construction refers to the fact that small amounts of movement within the pavement are tolerated, unlike the monolithic slabs of solid paving constructed with a rigid specification. For our purposes, flexible sett paving can be defined as sett work laid on a non-setting unbound bedding material and having its joints sealed with a non-setting unbound medium.

Traditionally, all sett paving would have been 'flexible' but during the 20th century, it was usurped by the obsession with cements and cement-based mortars. There has continued to be a small amount of flexible work undertaken with setts, but prior to the development of economic sawing processes to produce regular-shaped setts and cubes, it tended to be the cheaper, less prestigious work that was laid in this manner, leaving the up-market 'quality' work to be laid as rigid pavements with solid jointing. Modern flexible construction methods for sett work borrows heavily from techniques learnt over many years of experience with block paving .

As with all paving work, the actual construction used depends on the use to which the pavement will be put, predicted traffic loads, and existing ground conditions, amongst other factors, and so it's not possible to give a single specification that is suitable for all purposes. Areas expecting heavy use, such as carriageways, loading areas, etc, should be designed by an engineer who is familiar with site conditions. For residential driveways, paths and patios, it's possible to utilise a typical specification from a similar block paved project.

Many elements of the construction work for a flexible sett pavement are identical to those given on the rigid construction page, so be prepared for some repetition.

A word or two regarding natural stone block paving

The popularity of imported stone paving has been the outstanding success in the paving industry over the past decade, and what started with stone flags has been consistently developed as stone suppliers looked to expand the advantage handed to them by the shockingly low cost of stone from Asia, Africa, South America and other "Developing Nations", as they are now called.

One product area that is strongly expected to see real growth is the provision of Natural Stone Block Paving: dimensionally accurate blocks of selected stone that are laid in exactly the same way as the more familiar concrete and/or clay pavers.

A "Product Study" featuring a leading brand of imported stone block paving is available on this page .

A flexible sett pavement consists of the setts themselves, bedded onto a laying course, over a sub-base formed on a prepared sub-grade. This basic structure is illustrated opposite.

In some applications, particularly those anticipating heavy loads, a base course (see rigid construction ) of porous DBM or CBM may be included, or an improvement layer may be constructed between the sub-grade and the sub-base.

Decide where the pavement is to run, and/or consult the site layout plan. Mark out the extent of the pavement with sand guide-lines or aerosol spot-marking paint, if required. Determine how excavated spoil will be carted away from the site and the materials brought in, making sure that access will be maintained during the works.

See Setting Out pages for details on setting lines and levels for a pavement.

It is a good idea to dig wider than the planned width of a pavement. An extra 50-100mm at the edges of a patio or driveway makes handling much easier, but for larger projects, such as forecourts or carriageways, an extra 300-500mm may be required.

With sett pavements for vehicular traffic, such as driveways or carriageways, the construction is traditionally cambered (i.e. slightly higher in the centre than at the edges, as most roads are) to assist rapid drainage to the edges and subsequent run-off into gullies. Patios and pedestrian areas may be set out as a flat plane, rather than cambered.

Remove all weeds and other unwanted organic matter from the surface of a 'green' site - this is known as a 'site strip'. Reduce dig to formation level - this is the level at which the actual construction of the pavement begins. Excavate any soft spots and fill with compacted sub-base material. If the area of the paving is troubled with weeds, the exposed sub-grade may be treated with a general weedkiller such as Glyphosate, but it is unlikely any weed will be able to penetrate the upper layers.

The depth of dig is determined by the planned end use for the pavement.

For paths, patios and other areas of light, pedestrian traffic the depth of excavation below finished level is...

For driveways and hardstandings the depth of excavation below finished level is...

For pavements anticipating loads up to 7.5 Tonnes, low-speed carriageways, lay-bys, taxi-ranks etc., the depth of excavation below finished level is...

With a flexible construction, the body of the sett work is essentially 'loose' and so an edging or kerb is essential to contain the paving and prevent lateral spread. Brick edgings, stone kerbs or channels, or setts laid lengthways are all suitable. The kerb or edging should be laid on a concrete bed and solidly jointed. A channel course along the edges of driveways helps add authenticity.

This is the load-bearing layer of the pavement and so it is important that time and care are invested in its construction. A typical sub-base will consist of a compacted layer of DTp1 granular material, although, on some heavy duty applications, a layer of permeable Cement Bound Material (CBM) or even and porous Dense Bitumen Macadam (DBM) may be used.

See the sub-base page for more information about the types of materials and construction methodologies for this critical layer.

Any low spots in the sub-grade can be filled with DTp1, crushed hardcore, crushed stone or compacted bedding material. If the area to be paved is such that it requires raising or elevating to a higher level, then the lift should be constructed as a sub-base layer, rather than building-up with bedding material. The finished surface level of any sub base, should be accurate to within 20mm.

A sub-base layer should always be laid to the profile of the pavement, so that, for example, a pavement that is to have a cambered surface should have a cambered base layer, accurate to ± 20mm.

For flexible sett pavements, the bedding course should consist of a 25-40mm deep layer of a Class M/Zone 2 grit sand. Alternatively, a 5mm down hardstone grit, sometimes referred to as 'Splitt' can be used.

See the Aggregates page for more information on grits and grit sands .

The bedding layer is spread and levelled out over the area to be paved, lightly compacted with a vibrating plate and then screeded to a laying course before placing of the setts. The degree of compaction possible with any given bedding material needs to be determined beforehand, as grain size, moisture content and site conditions can all affect the amount of compaction possible.

See the separate page for further discussion about the fine art of screeding.

Newly cut setts tend to be fairly regular in size, allowing relatively tight joints, whereas reclaimed and/or cropped materials tend to be much more variable, and require looser jointing. Sawn setts are intended to be laid hand-tight to the preceding course and adjacent units, relying on purpose-made spacers (think: tile spacers) or small 'chocks' of grit to create a joint of 2-5mm. Fair picked setts may result in joints of up to 10mm or so, but only in exceptional cases should any joint be wider than that.

The setts are normally hand laid, one at a time. In most cases, a staggered joint patttern is used, although decorative patterns are sometimes used. The setts are carefully placed on the screeded bed and will often be individually settled with a small rubber mallet or sett hammer, using a taut string line or a straight-edged timber as a guide to line and level. Once a larger area is laid and all the cutting and piecing-in work has been done, a vibrating plate compactor is used to consolidate the setts en masse.

When a flexible jointing system is used, partial joint filling often takes place as the setts are laid to ensure even joint width and stability of the setts while laying is completed. Final jointing usually takes place during the consolidation work.

It is most important that the sett layer stands back from the work occasionally to check surface profile; what looks right to a string line or in close proximity, can look awful from 10 metres back. It is best to defer final jointing until the surface profile is satisfactory or 'sweet' to the eye.

Creating a cambered profile in a felexible sett pavement is possible, but a degree of forethought is required. It is essential that the sub-base layer is also cambered, as described above , to avoid having, say, a 35mm deep bedding layer at the channel edges and an 85mm deep bed at the crown.

The actual camber to the bedding layer itself can be acheived in a number of ways, but the two most common are the use of intermediary screed rails or the use of a profiled screeding bar.

The first method relies on setting up a number of parallel screed rails (trammel bars) within the bedding layer and then screeding between pairs of rails to create a series of 'planes' at slightly different angles. The rails can then be removed, the voids infilled and then lightly screeded over to create an even smoother overall profile.

Profiled screeding bars are specialist equipment normally only used by full time professional paving contractors, although they readily available from Probst UK (thanks for the pictures, guys!) and are a handy piece of kit for those gangs undertaking a lot of profiled work. The centre joint can be set to accomodate raised (roof-section) profiles, or dished (pan-section) profiles as the job warrants.

See the Screeding page for more information on screeding methods. 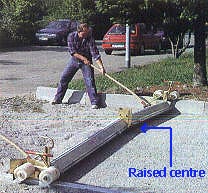 Once the setts have been laid and checked for alignment as well as finished profile, the joints should be filled. Normally, flexible sett work has the joints filled with a sand or grit, although pitch/bitumen was once popular and is becoming so again. See the separate page for more details on jointing methods.