There aren't many paving manufacturers or distributors that could convince me to battle through 110 miles of crawling traffic to get an advance peek at what they plan to offer us next year, but sometimes I feel I would crawl over broken glass to see what Stonemarket have in store. I don't always like everything they come up with, but I'm never less than awestruck at their willingness to have a go and to push the market forward.

So, a little over a week ago I trudged down to the Stonemarket HQ near Coventry to spend a delightful 3 hours being regaled with the thinking and planning behind a reasonably impressive platter of newbies. See what you think…..

the only entrant in the pressed concrete flagstone category, and hard not to like, but hard to get excited about. It's a very attractive updated version of the rightly admired Perfecta paving. Polished concrete with an attractive aggregate which will be available in three colours; Dalmatian, which is a light grey almost uncoloured option; Ash which is a darker grey-edging-towards-Charcoal; and Barley which is a soft buff. Safe and proven colour options.

There will be three sizes. My notes are hazy, but I think they're to be 300x400, 400x400 and 400x600mm, but I'm happy to be put right. Obviously aimed at broken bond courses rather than random layouts, but that feels right with such a modern paving. It's understated and I suspect it looks much better on larger plots than the few square metres available at this display. It certainly has the look of a paving that needs space to show itself off properly.

and this is the only real innovation from the natural stone side of things. A warm, subtly banded sandstone with a medium grain size and a soft shot textured surface set against crisp sawn arrisses. It's described as 'biscuit' coloured, and that's pretty accurate, as long as you are thinking Custard Creams or Nice rather than Bourbons or Wagon Wheels.

Four modular sizes (280x280/560 and 560x560/840mm ish) give sufficient versatility to create random layouts and the gentle variation in banding, from non-existent to quite definite, helps to emphasise the natural origin, and as with the Excelsior, it's hard not to like it as a paving.

However, the problem I see for it is its place in the market. It's obviously superior to the TruStone/MarketStone offerings, but not as precious as the Avant-Garde, and this positioning is deliberate. But how much of a market is there for a medium ranked stone, no matter how attractive it might be? The price differential might not be enough for it to garner the sales volumes it deserves.

The only other news from the natural stone realm is a 'selected' version of StoneSpar, the multi-stone, linear format paving we saw from Marshalls' commercial range earlier this year. They've selected a buffy blend (Garma) and a greyey blend (Harva) each of which features a particular ratio of four complementary stones in the single length (400mm).

This is a bit of a toe-dipping exercise. It's obvious this is a product with phenomenal potential, so the blends can be tweaked (the whitish quartzitic stone is probably a bit too white for both of the current blends) and there will be other modular lengths introduced as confidence grows, but even in the basic format, it's a fantastically exciting product because of its versatility and what it promises for the future, both for the residential and the commercial sectors.

Like many other manufacturers, Stonemarket/Marshalls are going large (as the kids say nowadays) with the so-called 'ceramic' paving which WILL be next year's big thing. Some are referring to their own products as 'porcelain', which it is, technically speaking, while others stick to 'ceramic', but I do like the decision to use the term 'Vitrified' and I agree wholeheartedly with the reasoning behind that decision. The terms ceramics and porcelains conjure images of fragility, and as thin as these….I'm reluctant to call them either flagstones or tiles: they're neither, really…these pavings might be (and the Stonemarket range is just 20mm thin) the one thing they are not is fragile. They are much tougher, stronger and resilient than you might think.

Three options in this first season, but expect to see more in years to come. Gravity is a dark, sombre slate or flamed basalt effect paving, in dark grey (Basalt) or almost black (Black) colour options. Paleo is...err...pale-ee-oh, a sort of ersatz sandstone in either light buff (Sand), richer buff (Gold), or steel blue-grey (Azura), and finally Lucent is an imitation slate in either the iron-stained flavour (Copper) or the classic dark indigo (Blue). There are different size ranges for each of the options, but as this form of paving is very much targeted at chic and stylish ultra-modern installations, a wide choice of sizes isn't the most critical attribute.

I do like the Gravity Basalt because it's a damned good copy of flamed basalt which is one of my favourite paving stones of recent times. The Paleo doesn't really excite me, not does the Lucent Blue. The Lucent Copper just isn't to my taste at all, but then, neither is the original mineral-stained slate on which it is based.

As you'd expect from a company such as Marshalls/Stonemarket, the production process is probably as advanced as is possible and the lithographic reproduction is both very good and very clever. Other suppliers will not have the range and so it will be easier to spot repeated prints, which could adversely affect the public's willingness to embrace this relatively new option.

But regardless of how well or how indifferent are the prints, it will be the quality of installation that makes or breaks vitrified paving as a product group. These pavings have extremely low water absorption and so won't easily take to a bog standard sand+cement bed and/or jointing without some additional prep. Given that all the various vitrified pavings are intended to be laid with narrow joints, sufficient specially-formulated resin-based jointing will be provided with each pack. There's no doubt the better-than-average contractor will take all this on-board and give us some stunning work to admire next year, but there'll be a worrying number of bodgers, cowboys and occasional pavers who will not understand the product and give us a panoply of truly awful and failed installations.

Talking of truly awful, we come to Timberstone Decking. Oh! FFS! People who buy this sort of thing really shouldn't be allowed out without a responsible adult.

I will accept that, as a wet casting, it is a real triumph of moulding, colouring and de-moulding, but all that fine detail which allegedly convinces the myopic that this might possible be aged wood, weathers and abrades in next to no time and in a little less than a year its true nature, namely wet-cast concrete, will become fully apparent, even to the fabled sightless fool on a marauding donkey!

One for the eejits that buy their paving from garden centres, I feel. 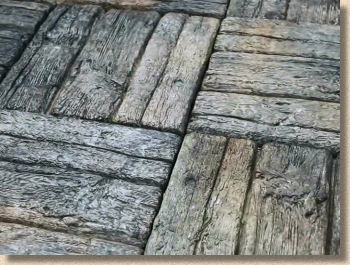 Elsewhere, in the world of block paving, not much of real significance. The so-called Templeton Driveway Setts look uncannily familiar, which is because they are, to all intents and purposes, DriveSys blocks from Marshalls. The edging kerb, given the strange name Ampliar (is it really just a matter of taking two completely unrelated words and cramming them into a portmanteau?) looks a good match, but no-one is revealing the cost!

Vecta , the 480x130x a chunky 80mm depth exposed aggregate linear paver block will be made available in a couple of pinky-reddy-brown options, either Warm Coral or Dusted Coral (not sure which is which). I've still not seen a driveway laid with this product (at least not in real life!) but I have a feeling the Coral flavour might be better suited to the natural colours of northern Britain than is the austere silver-grey of the existing option.

Trident , the 'distressed' 3-size paver will be available as a 'Grey' which I'm struggling to differentiate from the existing Charcoal. It will also be bunged into 3-sizes-inna-pack bales, as well. Don't get over-excited! 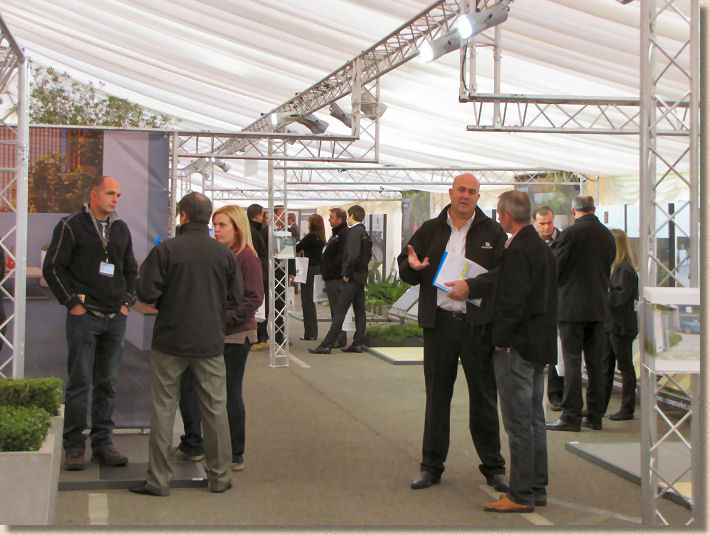 And that's it. Something for everyone, I feel, something to love, something to loathe. No doubt the eventual brochure will be stunning, as that's what we've come to expect, but that sense of professionalism and being a cut above is permeating into these annual expositions. The event is spread over two days, and is just so bloody well done, from the purpose-erected, gently-heated marquee, the better-than-average nibbles, right up to the willingness of Stonemarket staff to engage and the clever cd/booklet featuring all the new products, that it is an object lesson to other manufacturers and suppliers on how to present yourself without splurging mega-quids on some poncey organised event in a dedicated exhibition hall.

Having said all that, I did miss the 'bacon butty on arrival' jolly that they had last year!