It must be a cosmic conspiracy, or a perverse form of deja vu. I distinctly recall spending the previous rain-soaked Bank Holiday reviewing the new paving catalogue from Natural Paving, with Mrs Taz chuntering away in the background about "family time" and me promising to take some time off for the next Bank Holiday. So, it's a little unnerving to realise that next Bank Holiday is already upon us, that the obligatory rain is ruining it for most people, and I've yet another new paving catalogue propped in front of me.

Creagh Concrete have the honour of holding the Bradstone licence for the whole of Ireland, and this allows them to manufacture their own selection of products from the Bradstone range, tailoring the menu to suit the particular tastes of the various parts of the island, which tend to be slightly more conservative than those of the big island to the east, and less enamoured of bright, strong colours. It's summat to do with the 'soft' weather and a tradition of building with grey Irish limestone and concrete.

In the “Summer 2007” catalogue, however, you'd be hard pressed to identify Creagh Concrete – there's a logo and a brief mention on the back cover, but the front cover, and much of the text within, heavily emphasises the Bradstone brand, far more so than in previous years. This is probably no bad thing: Bradstone is an internationally known and respected name, while Creagh Concrete are probably best known, certainly in the north, for Ready Mix and what might be termed 'agricultural castings'. If you've an ace in your hand, it'd be silly not to play it, and that would seem to be the thinking behind the re-branding plan put into place by the company over recent months.

For those on the right hand side of the water, the front cover of this catalogue will seem familiar – it's that wistful-looking lass sat on the Travertine patio from the cover of the British Bradstone 2005 catalogue. The standard Bradstone font is retained for the brand logo, but a more stylish Trebuchet font has been used for the headings and keywords, and this gives an informal and relaxed feel to the text, which starts on page 3 with the contents followed by a succinct introduction to the thought processes involved in planning a patio that spills over onto the following pages.

Being based, for most of the year, on this side of the Irish Sea, it's tempting for me to engage in a 'compare and contrast' exercise, looking at the common items and the differences between the British and Irish catalogues, but that would be counter-productive, for the Irish edition has to be considered in its own right. The market is different, the population base smaller, and with relatively few cities or conurbations, logistics have to be considered when selecting the products to offer. So, although many of the photos and pavings will be familiar, the range is more selective and those products deemed worthy of gracing the Irish market are presented in a distinctively different style. 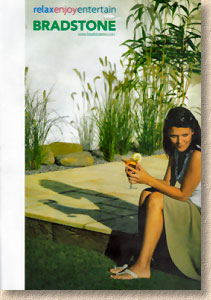 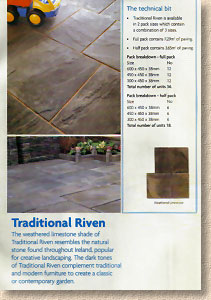 The use of generously-proportioned boxed-in areas containing what is termed “The Technical Bit” is particularly effective. Essential information on sizes, colours and pack quantities is immediate and straightforward. There's no scratching about or referring to the back of the catalogue for a list of sizes: it's there, right in front of you, on the same page as the product to which it refers, just where it should be.

One noticeable difference is the change of name for the Old Town Sorrento, which is known as Weathered Limestone in Britain. Irish limestone is predominantly grey or grey-blue, and with this product revelling in soft, warm, buffy tones, a more Mediterranean-flavoured name makes far more sense. Meanwhile, the Traditional Riven Weathered Limestone is darker, more sombre paving altogether, and a colour blend specifically chosen to appeal to the home market. When viewed in isolation, this product can seem foreboding, almost funereal, but when it's used as a foil against the lighter grey render dash used on many of the bungalows dotted around the countryside, it works remarkably well.

While the sensational Chelsea Cobble has been included (and rightly so!) it's good to see the more staid Cobble Paving has been retained, despite it having been supplanted by Carpet Stones in mainland Britain. This is just the type of product much beloved by gardeners for simple, rustic paths on cottage-style schemes. It's surface is a little too uneven for use on patios, but it blends well with other, gentler paving, and, in the Grey/Green option, offers a wonderful detailing partner to another uniquely Irish offering, the Slate Paving in a mellow Mourne Green tone.

Although this paving is available in Britain, albeit from a different Aggregate Industries imprint and in a different colour, it really comes into its own in this format and colour blend. It's an ideal blend of texture and tone for a specific market and as such, is a prime example of the power of an international brand: local licensees can tinker with the variables of an established paving to fine-tune it for their own market.

The Laying Instructions covers paving, circles, walling (with a separate bit for the Mountain Block) and edgings. It's concise, probably too concise, with all five topics covering just two pages, with space to spare, but it's never easy to know what quantity of advice would be 'just right'. To be comprehensive would take half the catalogue or more, and that's never going to happen. However, two pages for five disciplines is going too far in the other direction.

The “Case Studies” are a little confusing. I suspect that the idea was to present a handful of ideas in the form of a makeover or 'before and after' images, but the actuality is a selection of 'after' images, with two separate blocks of text extolling the virtues of Old Cathedral Paving, and an excerpt of a landscape drawing for Old Town. Case Studies are a proven method of showing how a product can be used, and should inspire the reader to try them out. They can be immensely valuable and instructive when presented properly, but the three examples crammed onto these two pages don't really constitute a “study”, more of a “peek”.

The next four pages are given over to good, honest, sensible advice. There's an informal offer of help and advice via 'phone or email, accompanied by a group photo of the “Bradstone Garden Team” that engenders confidence by giving the company recognisably human faces. There's a short but effective warning regarding Health and Safety, followed by a very useful 'Care and Maintenance' section that contains a lot of good information in a somewhat disjointed manner. The FAQs are a wonderful idea, and, from my knowledge of the questions that come in to this website, they are very, very FAQs, and fully deserve a page to themselves but returning to the earlier comments regarding the brevity of the laying advice, a whole page is given over to a close-up image of the Sorrento Paving that has already been used elsewhere in the catalogue. It's space that would be better utilised for extended laying or maintenance advice.

The layout guides are useful, and it's good to see that the cross-joints that marred the layouts proffered in the previous editions have been eliminated: the layouts look so much better for it. Also, using colour-coded pages to differentiate the technical advice for paving and walling is a shrewd move, but the space given over to walling diagrams is incredibly generous, verging on lavish, when other deserving sections have been denied such largesse.

As stated previously, it's easy to fall into the trap of comparing Bradstone Ireland with Bradstone Britain, but that doesn't achieve anything. What has to be considered is whether Bradstone Ireland have selected the right products for their market, and whether they've produced a catalogue that does justice to those products, and the answer to both those questions is a resounding yes. Johanna and her Garden Team have chosen wisely, and their sympathetic understanding of the Irish market is evident. They've stayed away from the Indian Sandstone that is available at almost every Builder's Provider, Garden Centre, and corner shop at ridiculous cut-throat no-profit prices, and instead, they've focussed on products that are unique to Bradstone and well-suited to the vagaries of the erratic climate and the diffuse, beguiling light. The catalogue is professional, high quality and distinctively different to that distributed in mainland Britain. It's still Bradstone, but it's definitely Bradstone Ireland. 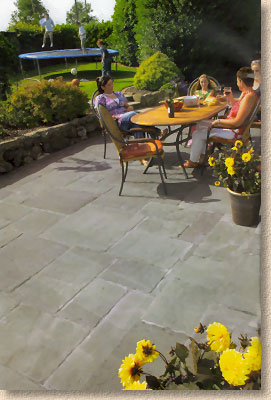 Want your own copy of the Bradstone Ireland Summer 2007 catalogue?