This page takes a look at the use of cobbles, the rounded, natural, undressed small-boulder-like stones used for paving, giving an overview of the many terms used for cobbles, and considers their use as a paving material.

Construction of cobble pavements, using traditional and modern methodologies is examined on a separate page

As with many other traditional paving techniques, this particular paving is known by a few different names in different parts of the country. Up here in the civilised part of the country, we call them duckstones or cobbles, but they are also known as cobblestones, beach cobbles, river cobbles or field stones (?!?!)

Some of the confusion arises from what many people think of as cobbles. As can be seen in the photo opposite, the rectangular blocks of neatly dressed stone, laid in regular courses are, to be accurate, setts. These are examined in more detail on the Sett Paving pages.

Many folk incorrectly refer to these "setts" as "cobbles", and this is often the sort of paving imagined when one hears of 'cobbled' streets, but, to be accurate, it's the rounded, irregular, undressed, lumpy, bumpy stuff at the right hand side of the photo that are really cobbles. 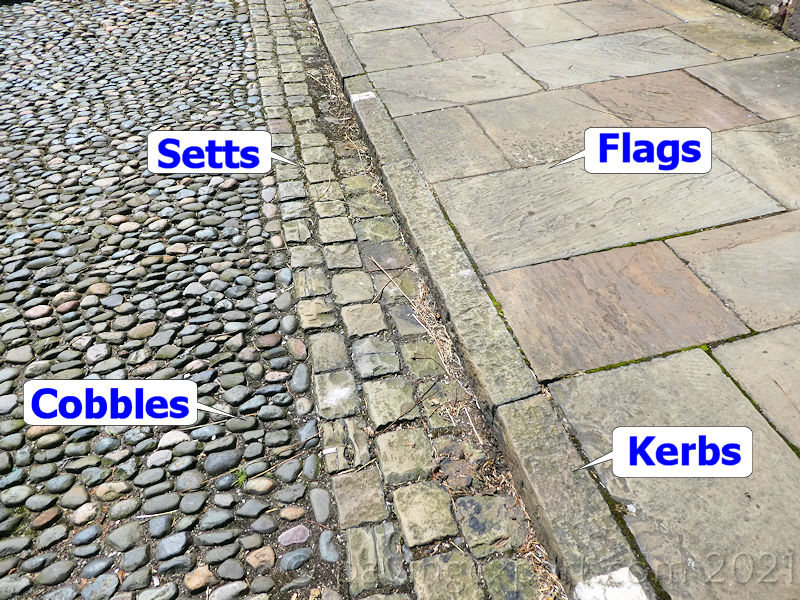 Geologists and other Rock Monkeys define cobbles as 'rounded stones between 64mm and 256mm in size' . Those cobbles between 64 and 128mm are "small cobbles", while those between 128 and 256mm are, surprise, surprise, "large cobbles". Rocks bigger than 256mm are, apparently, boulders, and those less than 64mm are pebbles.

So, just to clarify, cobbles are unworked lumps of stone that have not been dressed, tooled, squared-off or worked in anyway that affects their natural 'as found' shape and size.

Setts, in contrast, have been worked, using manual tools or machinery to give them a roughly cuboid shape with six faces.

At one time, many roads were 'cobbled'. Being primarily derived from river beds, beaches, drumlins or boulder clay deposits, cobbles are plentiful and well-distributed throughout Britain and Ireland.

They could easily be set into a base of sand or loose, crushed stone to provide a usable surface, compared to a sett paved surface, which represented considerable labour in dressing the stone with hand tools prior to laying, and assumed a suitably workable stone was available locally, which was not always the case, especially in the South-East of England.

Those sett pavements were reserved for prestige works, such as the centre of busy towns or the driveways of the landed gentry, whereas cobbles were an Everyman's version: they provided a hard, resilient surface that could be cambered to keep it well-drained and comparatively mud-free all year round, it was fairly comfortable to walk upon (all this is in the days before stilettos or high heels!) and could be trafficked by man, beast and cart alike.

They can sometimes be spotted in authentic historic settings where they would have been a basic utilitarian surfacing. Old farm cottages, ancient monastic and religious buildings and historic houses occasionally feature cobbled pavements that are genuinely old and exactly as they would have been at the time of installation, with no cements or high-performance bonding agents used in the construction. However, the 'traditional' methods of construction don't cope well with modern traffic, so many cobbled pavements that want to look old and original for historic or tourist-attracting reasons have actually been reconstructed using more up-to-date methods that gives them more of a chance with the cars, vans and 4x4s of today's society.

Nowadays, this type of paving is often used to keep pedestrians, and sometimes vehicles, off designated areas, hence its occasional categorisation as a deterrent paving , a term which refers to pavements constructed in such a way as to impede or discourage foot or vehicular traffic.

However, while the use of cobbles as a physical deterrent is understandable, and can be said to make good use of a plentiful, attractive, natural resource, all too often they are laid in such an appalling manner that they inadvertently become a visual deterrent, too.

After a lull when cobbles were completely out of fashion, there has been something of a resurgence in interest over recent years, especially for fancy or decorative work. However, the number of contractors capable of installing them correctly and efficiently has plummeted over the intervening period, which is a large part of the reason why we see so many poor or downright awful installations.

High quality cobble-laying is probably closer to an art form than any other type of elemental paving, and this is looked at in more detail on the cobble construction page .

Traditionally, cobbles were set into a bed of clay, hoggin, sand, gravel or whatever was available locally, and then jointed with more of the same. Traffic was limited to people, animals and carts, and so this type of paving just about survived.

Modern traffic and the need for a stable, reliable pavement means that most modern installations rely on a cement-bound bed and similar jointing.

Careful choice of the stones used to construct a cobble pavement can determine whether it acts as a usable, if slightly uncomfortable, surface, or an ankle-snapping, pram- and trolley-proof, deterrent. Originally, most cobbled surfaces were laid to be an improvement on an unmetalled surface, ie, mud and puddles. The stones were laid tight to their neighbours, with flattest surface uppermost. This role was gradually usurped by dressed sett paving, and now cobbles are often relegated to providing a cheap infill or feature paving, or a "Keep Off!" deterrent paving.

As already mentioned, cobble paving traditionally relied on local materials and so there is enormous variation in what are used as cobbles in various parts of the country and in other countries.

Not only is this one of the few remaining ways for towns to give themselves a unique identity now that most urban centres are indentikit models of all-too-familiar national brand shops and the plywood windows of deserted pubs, but it also gives a wonderful insight into the local geology.

Here's just a few ... if you have any photies from your neck of the woods, I'd really love to see them

Compared with other forms of paving, properly-laid cobbles are expensive. They are time-consuming and labour intensive...just arranging the stones into a reasonable pattern is like solving a jigsaw, but the actual laying work is not technically demanding, and could be undertaken with basic DIY tools.

There are plenty of eejits out there who think they can lay cobbles only to find that they actually can't, by which time it's often too late for the poor client.

Contractors asked to undertake this type of work will often charge for their time, rather than by the area. Be aware that the skills needed to make a decent job of laying cobbles are not the same as those required to lay block paving, and some so-called "Paving Specialists" will never have laid this type of work before. Ask to see work of similar nature before awarding the contract.

Sadly, cobbles tend have limited mainstream uses nowadays. They can be used more effectively as a hard-landscape feature, such as around ponds or statuary in the garden.

Other than finding a competent installer, the biggest problem is that they can be uncomfortable, if not plain dangerous to walk on, and they can present a serious challenge to anything with small wheels such as children's bikes, prams and shopping trolleys. They can also be slippery when polished.

Having said all that, when laid well, they really are a delight and each project is utterly unique.

Cobble paving is very low maintenance once laid needing little more than the occasional sweeping with a stiff brush to remove dust and detritus. If you find green algae building up on them, it can be removed by a pressure washer or a brush and water. Swilling the area with Jeyes Fluid or Wet'nForget is said to kill the algae, which can then be swept away after a couple of days. Properly laid, cobbles should easily outlast longer than any of us!

Prices for cobble paving are extremely variable, and so no matter what prices were to be published here (as happened up until December 2012) some will consider them phenomenally expensive while to others they will be ridiculously cheap.

There is no "going rate" for cobble paving. Price depends on the scale of the job in hand and, in particular, the skill level of the installer. It is not unreasonable to be asked for £50 - £70 per square metre for the very best work, and that's just for the labour. The preparation, bedding and jointing can easily double that sum.

As repeated in countless places throughout this website, the value of a pavior's work has to be judged on the quality. There are precious few contractors worthy of £70/m² but there are plenty who are not worth a quarter of that. Before instructing any contractor to lay cobbles, it's imperative that previous work is inspected.