Circular-ish stains on flagstone paving? What causes this and how can it be fixed? This FAQ looks at what's involved.

I have some slabs laid as patio.They now have dark circular stains, I maintain that this is a manufacturing fault , but the manufacturer says that it is to be expected due to natural variations in the materials used. What is the truth?

To read more about the second problem featuring multiple spots and circles on each flagstone, click to the Reflective Staining page.

This is the photo sent in by Helen as part of her original question. What she describes as 'staining' is actually a colour difference between the outer edges of the flags and the centres, and, just to complicate matters, some flags are more seriously affected than others, while others seem totally unaffected.

The effect is probably best described as a variation in shading, with the outer edges appearing 'bleached' or lighter in hue than the darker, more intensely coloured central area. The fact that is occurs on so many of the flags indicates that it can only be a side-effect of the manufacturing and production process, while the variation in severity of effect suggests that other factors must also be at work. 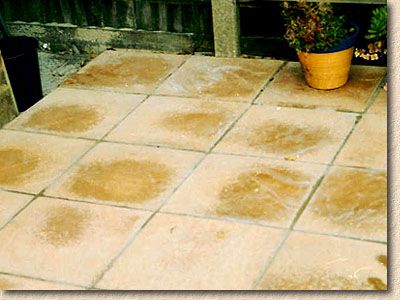 In fact, this phenomenon is not restricted to patio flags, but can also be seen on BS Pressed Flags, which are manufactured to the highest standards of strength and dimensional accuracy, but not for colour or aesthetic appeal. In the two examples shown above, the colour difference is reversed: the darker-hue is on the outside edges, and it's the centre of the flags that is lighter. 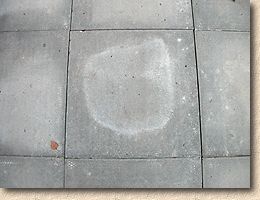 Actually, this phenomenon can be seen on almost any pressed flag, whether it is a budget product as sold for less than a quid in the DIY sheds, or a supposedly 'quality' product sold for commercial and public works. And it is not limited to just the buff flags, although it may seem so from the photographs shown here - it's just that the effect seems to show up better in photographs of buff-coloured flags, but it can also be observed in uncoloured flags (as shown opposite), as well as in the other popular colours, such as reds.

Of perhaps greater concern is that fact that, in many cases, the effect does not go away but becomes a permanent feature.

The flags in this photograph come from a busy town centre, so plenty of foot traffic and abrasion to wear them down, but the circular markings are still clearly evident...and the flags are roughly 20 years' old!

So - what is it in the manufacturing process that is causing this discoloration? Well, in most cases (but NOT always) it's actually a post-manufacturing practice that's the culprit - it's the way the flags are stacked and stored immediately following manufacture that lies at the root of the problem, and that stacking/storing procedure is driven by the need to produce paving as cheaply and efficiently as is reasonably possible.

After pressing, the flags are bundled together in 'packs'. However, by stacking the flags into bundles before the curing has fully completed its initial stage, what were individual flags start to behave as a single 'block' of concrete. Basically, the concrete nearer the outside of the block of flags partially "dries out" at a faster rate during the curing process, while that in the centre has remained 'damp'. The result is a difference in shade once the flag is fully cured.

In the trade, it is often referred to as "Differential Curing" which is a good summary of the problem. However, some manufacturers have been heard referring to it as 'Differential Weathering", which I feel is slightly misleading, as the weather is not the real problem and it seems that there is a suggestion that, like efflorescence, it's largely beyond their control. Hmmm!

This phenomenon has been evident in 'strapped bundles' for a good number of years, but it seems that the advent of shrink wrapping has resulted in an upgraded version of the problem.

Now, the remaining free water in the flag doesn't have the unobstructed escape route afforded to 'strapped bundles'. Instead, it finds itself trapped inside the polythene shrink-wrap, and so condenses on the inside of the wrapper. 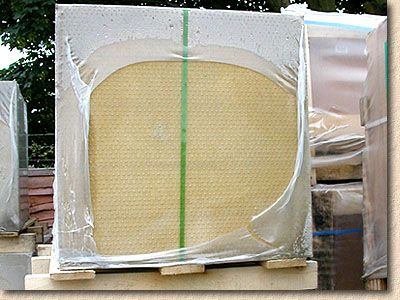 Meanwhile, the flags on the front and back of the bundle, where the shrink wrapping is open as in the photograph opposite, are not as badly affected as those in the centre, as the free water has an easier escape route, allowing the centre of these "end of bundle flags" to 'dry' at a faster rate, which is the cause of some of the more strangely shaped circular marks.

On a more technical note, it's not quite correct to think of concrete as drying. The curing process is a little more complex than that, and is a change in chemistry, rather than an evaporation of water content. However, the water content of a concrete does have an effect on the actual curing process, and so, if the moisture level is not uniform throughout the concrete, you can end up with a colour or shade variation in the cured final product, which is what seems to be the problem with the flags shown in the photographs above.

This is the bad news - there is no remedy other than time. There's no magic jollop that can be rubbed in to even out the shade differences; no amount of washing, scrubbing or cursing will make them look like they should. The shade difference is, literally, cast in stone and only time and natural weathering will make it better.

Some contractors/householders have found that by applying a sealant , even one of the cheaper colour-enhancing acrylic sealants, the colour may be evened out, but it's not foolproof - it seems to work in some cases but not in others.

Whether it's the flags themselves, or the sealants, or possibly the type/degree of discoloration that actually determines whether applying a sealant will work, I can't say, as the reports are few in number and mostly anecdotal, but one reliable contractor in the South of England reckons that, if the discoloration totally vanishes when the flags are wet, then a penetrating acrylic sealant, such as Lithofin MN Flag-Seal, will do the trick. If you're tempted to try this for yourself, I would test it on a discreet corner of the pavement first, before sloshing sealant all over the flags only to find it makes no real difference, and you end up with glossy, varnished flags that are still discoloured. Don't say you weren't warned!

Usually, the discoloration disappears over time: sometimes it's a couple of months, but I have known it to last for 12 months or more, before it eventually disappears, although not always completely. In some cases, there is a faint but permanent difference in shade between the centre of the flag and the edges.

In most cases, the manufacturers/suppliers are not interested in an exchange or refund. They have the old line about the flags being a 'budget' or 'utilitarian' flag, rather than a top-of-the-range product, and, in the words of the prophet, you gets what you pays for. However, this phenomenon has been seen on 'quality products', such as the smooth ground or shot-textured flags, and I think it is unfair of the manufacturers to reject a legitimate claim when those flags are sold at a premium price.

It's unlikely that claiming it to be a manufacturing fault would have much of an effect, although a good lawyer could argue that it probably does constitute poor manufacturing procedures. There's no harm in asking if the supplier will offer a (partial) refund, as the client is " terribly disappointed " with the finished effect. The best line of attack is to argue that the flags don't look the same as those in the brochure or on display in the supplier's yard. You need to go for the aesthetics (or lack thereof) rather than the composition of the flags or inadequacies in the manufacturing process.