Home / About Us / News / Mystery markings

I don't normally use the News section to appeal for help, but the following is such a mystery to me, that I thought I'd throw it open to as wide an audience as possible to see if anyone had any ideas. This has also been posted to the Brew Cabin discussion forum on this website, to see if I can elicit any help from the crew in there.

I was asked to take a look at some high quality wet-cast flags laid to a patio somewhere in Britain yesterday (Wednesday Decemmber 5th). A strange marking/discolouration has appeared on them since they were laid during last November (2006) and although the manufacturer thinks they know what the core problem might be, there are a number of anomalies that defy explanation.

For example, the effect appears only on flags laid to this one job. There is no indication that flags manufactured at the same time and laid to other jobs in other parts of the country are similarly affected. Which automatically makes you think it must be summat the contractor did while laying them, but try as I might, I can't find fault with either the bedding or the jointing. And just to further confuse the issue, some of the flags that are affected have been used a copings on a wall rather than as patio paving, so we can't blame bedding or jointing. 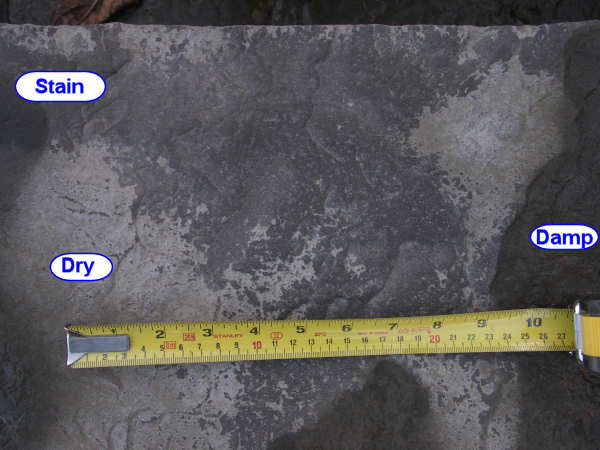 This is a coping stone: it was a damp day, so you have to ignore the wet/damp areas and concentrate on the dark discolouration, which looks like lichen. There's a close up of the above image.... 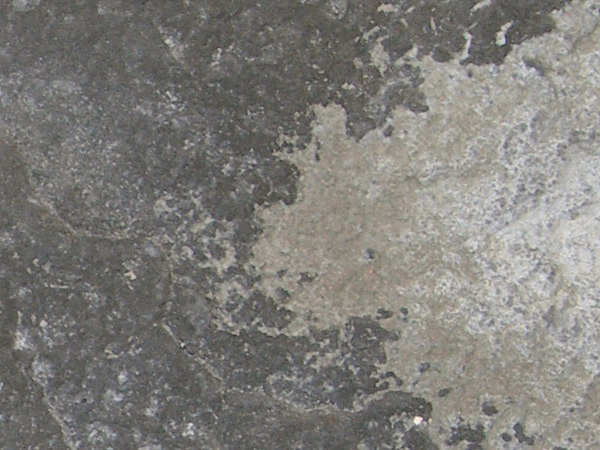 ...I know it looks like cement staining, as though some eejit has spilled neat cement powder onto the surface, but we know from other examples on site that this is NOT the cause. In fact, we're fairly sure it's a carbonate deposit that has been brought up to the surface by some means, but we're not sure.

Here's a picture of a flagstone, albeit wet, which shows the problem affecting the edges of the flag, as though it was 'picture framing', but notice how it has only affected the very corner of the lower left flagstone, while it varies in width on the uppermost flag and isn't present at all on the lower right flag... 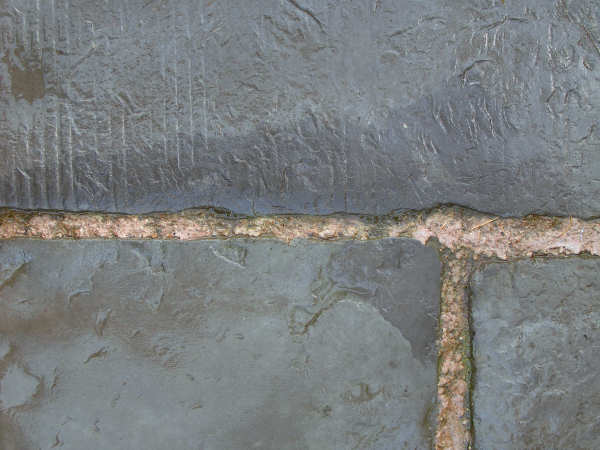 .... on other flags, the problem doesn't affect the edges at all but only appears in the centre of the flag, while some flags are literally covered completely and others haven't a mark on them.

If anyone has any experience of a similar problem, or can help us identify the cause of the problem in any way, I'd really like to hear from you. I'm happy to email hi-res full-size photos to anyone that can help, and I have a small number of other photos, but the wet state of the surface really doesn't help.

Any thoughts? Email me: info@pavingexpert.com