StreetDesign is the third incarnation in less than a decade of an event previously known as External Works . Since its last makeover in 2003 it has been co-located at Birmingham's NEC with Traffex and Parkex , the annual jamborees for the traffic management and parking industries, but even being tacked on to such popular events hasn't been enough to help this show command the level of attention and support that it needs to survive.

StreetDesign is, it seems, intended to broaden the appeal, but it's only a change of name, and there's an argument to be made that this new name is more limiting than that of its predecessor: after all, "external works" covers just about any aspect of landscaping, whereas "street design" rather limits it to urban highways. Perhaps the organisers thought this might appeal more to those attending the other events: Traffex - traffic - street, there's a sort of logic to it, but the problem with this event has always been its failure to attract those more intimately involved in the hard-landscaping trades. Street design is but a single aisle in the paving supermarket: the aim should be to expand the potential audience, not to further limit it.

And the effect of that limiting was immediately evident. The StreetDesign area was tucked away at the back end of the cavernous Hall 5. Visitors would be obliged to battle their way through the bustle of Traffex or fight through the throng of Parkex, before encountering the tumbleweed that announced your arrival at StreetDesign. Two months ago at CityScape , a life-size plaza was created within Earls' Court: here, we had three bits of carpet laid to look like a zebra crossing.

Looking through the exhibitor list, I marked six exhibitors of interest. Those exhibitors deserve enormous credit for showing up and performing valiantly in trying circumstances. As interesting and entertaining as they could be, six exhibitors can't be expected to convince a designer, specifier or contractor to forsake a day's work and travel to Birmingham. Two years ago, Charcon were present; this year, only one concrete paving manufacturer had been persuaded to partake. Nearly 30 million square metres of concrete block paving was laid in Britain last year, yet just one of the umpteen manufacturers thought this an event worth attending. How can it have the nerve to proclaim itself as the "visionary new event focused on shaping the urban built environment" when only four surfacing suppliers could be tempted to exhibit?

Why was this "visionary new event" stuck at the back of the hall? It should have been centrally located, enveloped by Traffex and Parkex so that it could directly benefit from through traffic. Instead, it appeared as an afterthought, something to hinder your progress to the toilets. There are plenty of Traffex exhibitors that could straddle the boundary between the two zones: Instarmac manufacture and distribute industry-leading pavement mortars; Aco are the best-known name in linear channel drainage, but they (perhaps wisely) stuck their colours to Traffex rather than StreetDesign. Surely they could have provided a gentle transition between the flashing traffic signs of Traffex and the potential hard surfacing of StreetDesign? 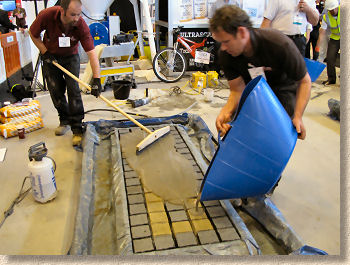 The most interesting feature of the show, from a hard-landscaping viewpoint, was the"Ultrascape Challenge" presented by Instarmac , which, strictly speaking, was part of Traffex rather than StreetDesign. The basic premise is to have two teams of two men competing to lay and joint a panel of sett paving in two sessions: bedding during the morning session, and jointing after lunch. The team that, in the opinion of stone specialist Barry Hunt, most competently follows the requirements of BS 7533:12 are declared winners and lumbered with a mountain bike apiece.

It's a great way of promoting the Instarmac products and their dutiful obsession with all things 7533, but it also provides a superb showcase for the genuine streetmasonry skills that are enjoying something of a resurgence thanks to our re-discovered fascination with natural stone for streetscapes.

The best new product seen was yet another Traffex exhibitor: Aco have teamed up with innovative lighting magicians Eye-Leds and created a grating with inset LEDs. Obviously, you're not going to be able to read your copy of this week's Beano by the soft ambient glow provided by the little lights, but as a direction or position guide, they are a cracking idea that has a great dollop of that most magic of properties: versatility! This is an idea that can be used to create reassuring safety lighting through urban streets, provide uplighting for step risers, illuminate the threshold of a private driveway…it goes on, and it's an idea I expect to see much more of in the coming years.

Meanwhile, over at StreetDesign, specialist stone paving suppliers Hardscape and CED lay in wait, ready to respond to the requests of any visitor that wandered into the StreetDesign sector. The range of stone now available continues to grow, exponentially it seems, and it's increasingly difficult to keep tabs on who has what and where and how much, but the "stand out" product for me is the inset step units shown by CED. It's a neat and very attractive solution to the requirement to have 'visual contrast' at step nosings without having to resort to some cheesy yellow plastic strip or paint. Simply rebate the step surface and epoxy-fix a 'slip' of contrasting stone. Again, an idea with enormous versatility: just choose a stone that contrasts with the main unit and you can have a bespoke finish to your streetscape project.

Wherever CED are, SteinTec won't be far away, and in this case, just across an aisle to nowhere. Another layout masterstroke by the organisers. What purpose is served by blind alleys?

Across the faux zebra-crossing (where groups of misplaced visitors seemed more keen on recreating the cover from The Beatles' Abbey Road album than on talking to exhibitors, Addagrip had the resin surfacing audience to themselves in the absence of the other usual resin-based surfacing exhibitor and as at EcoCityScapeBuild last month, they were making good use of their empty 205 litre drum method of display.

Round the corner, the only concrete paving manufacturer to show their face, Hanson Formpave , were exhibiting their usual wares, including the ThermaPave launched at BuildCityEcoScape. No public installations of the heat recovery paving yet, but fingers are crossed for something that is, as they say, in the pipeline.

Across from Formpave, CSB Environmental were showing off a beast of a cleaning machine. This has to be the most impressive piece of dedicated street-cleaning kit I've ever seen. Imagine if Jeff Tracey of Thunderbirds fame had commissioned Brains to design and build a pavement cleaner to keep the paths and runways of Tracey Island in tip-top condition: then you have some idea of what Simon Bailey was so rightly proud of. This wonder-machine recycles the water it uses and collects the crap for safe disposal instead of just spattering all over any adjacent surfaces. It even has an in-built bog (oops: err "welfare facility") for the lads so they don't have to do a spot of impromptu weed-killing in a back alley somewhere!

Finally, (I know! It's already time for "finally"!!) Pipeline and Drainage Systems , another graduate of CityBuildScapeEco, had their range of lightweight kerbs-drains and gratings on parade. No photo of Diane woman-handling their 9kg emergency gully grating this time, as she can't keep up with all the fan letters! 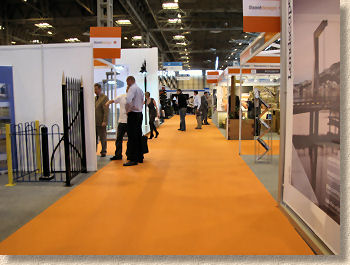 And that really was it. Had I been in a rush, I could easily have seen everything worth seeing in 20 minutes. It's actually taken longer to write about it than it should have done to visit each of the exhibitors of relevance. And it's those exhibitors that I feel most sorry for: they deserve better than this. Some of these companies have supported this event through its various incarnations but I sense their endurance and steadfastness is just about at the limit. The show catalogue recommends marking the date of StreetDesign 2011 into your diary. I'll be using pencil, a fairly faint pencil, because on the evidence of last week, this event may not have the legs to make it as far as 2011!