Home / About Us / News / The Natural Stone Show 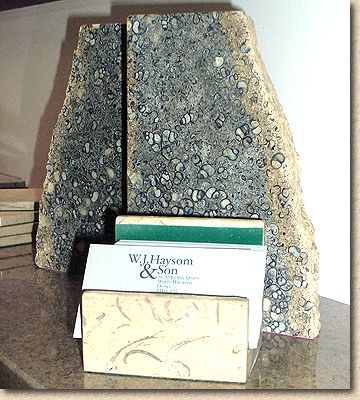 The British Isles is not best known for materials that can be highly polished and used for internal decoration but Purbeck limestone, produced by WH Haysom & Son, is a very hard crystalline stone. Available in a variety of colours from several distinctive quarry beds, the high shell content makes this an extremely attractive material and the Purbeck 'marble' was particularly valued by the builders of countless mediaeval cathedrals and churches.

Of the other British materials on show, Lambs Sussex Sandstone could prove useful for restoration purposes. This Wealden sandstone is geologically similar to the German Obernkirchener sandstone and may possibly be a good match for sandstones in the Petite Suisse region of Luxembourg and is worth further research.

Of the relatively few companies to be seen at both recent stone shows, Prodim BV from Asten reported that their decision to exhibit in the UK was well rewarded. Considerable interest was expressed in their revolutionary Proliner®, a digital measuring and drawing machine that directly connects to CAD systems and modern stone cutting machinery. Capable of accurately measuring three-dimensional objects, it is designed to considerably increase production efficiency and reduce costs.

In addition to the products and services available, there was also the opportunity to discuss various technical matters with representatives with the Stone Federation, the trade association for the UK and conservation bodies such as English Heritage and Historic Scotland, as well as a variety of independent consultants experienced in petrographic analysis, laboratory testing and specialist surveys.

Both the London and Natural Stone Shows provide an extensive Conference and Seminar programme, with presentations by recognised experts in their particular fields, so there is plenty of scope to catch up with developments in both the new build and conservation industries.

The continued growth of the UK natural stone industry in recent years is reflected in the increased number of exhibitors at both stone shows, compared to previous years. Whether or not two stone shows can be sustained in the long-term remains to be seen, but at least the element of competition generated will help to stimulate interest in the many fine building stones that are available from the British Isles.

In conclusion, as a geologist with diverse professional interests in both building and environmental conservation, I found that my time in London was fully occupied and I returned home with many excellent new contacts and plenty of ideas. Both of the shows possessed their own particular merits and I look forward to the prospect of visiting the inaugural Dublin Stone Show in November 2004, where stone products and services from Ireland will be highlighted for the very first time.

Future events promise to be even better so watch this space and take a good look for yourselves.

Scott is a professional geologist and independent stone consultant working with many companies throughout Britain, Ireland and Europe helping to identify suitable stone for construction projects. He also undertakes photographic work, PR and report writing for trade and professional journals. You can contact him via... scott@sengering.fsnet.co.uk