Pitch, which is simply an older name for bitumen or thick tar, has been used to joint setts, and other forms of paving, for hundreds of years.  This page looks at its potential.

The use of pitch for jointing has diminished over the years, but it still has potential, particularly for heritage projects and the like.

Before the advent of reliable cements, pitch was the only viable and affordable option, but its use was supplanted by cement mortars from the mid 1930s onwards, a change that is at least partly responsible for the demise of stone paving in the latter part of that century because of the enormous numbers of failures: sett pavements that fell apart within a relatively short period of time because the designers and installers failed to understand the limitations of cement mortars and the dynamics of sett paving .

Whilst perfectly capable of coping with the stresses and strains imposed by pedestrians and horse-drawn traffic, pitch-jointed sett pavements started to suffer as the speed and loads of vehicles increased, and as the popularity of motoring grew it soon became apparent that pitch was unreliable as a jointing medium because it was too flexible.

This sett paved access road was originally pitch jointed and served its purpose for decades without a problem until the road started to be used by heavy wagons, which crossed over the restraining edges as vehicles passed each other on a pavement designed for horse and carts. The edge courses collapsed, the pitch jointing strated to crack and become loose, and now the whole road is beginning to fail.

Nowadays, pitch is used mainly on so-called 'Heritage' projects, to recreate streetscapes of yesteryear. However, its naturally soft nature can make it unsuitable for many civic applications such as shopping precincts and plazas, as heels can easily penetrate and become 'stuck' in wider joints. Consequently, much stiffer, penetration-resistant modified bitumens specifically developed for pavement joints are now used for such applications.

There is a separate page which examines the construction of Heritage setts pavements and sett work constructed using reclaimed materials.

Traditional pitch (which was more akin to modern roofing bitumen) and low-stiffness bitumens may actually soften sufficiently to 'flow' on exceptionally hot days, making them unsuitable for sloping pavements. Steeply inclined sett ginnels, paths and alleys, a common hardscape feature in many towns and cities, really do need a stiff, modified bitumen for their jointing mainly because of the difficulty in retaining molten pitch in non-horizontal joints, and keeping it there on the hotter days of summer, when it has a tendency to 'flow' downhill.

For private driveways and the like, standard (roofing) bitumen/pitch/tar is still commonly used and is just about adequate for the low loads and stresses imposed on this type of light traffic or pedestrian-only area. It's relatively cheap, effective, aesthetically pleasing and virtually maintenance free. For smaller residential projects with low traffic loads, it is worth considering as a viable alternative to cement- or resin-based mortar.

However, there can be no doubt that a modern, purpose-designed modified bitumen is by far the best choice for pitch jointing when it has to be right.

Popular modified bitumen products specifically developed for sett jointing include "Sett Grout" manufactured by Colas and the more realistically priced "CobbleSeal" from Jobling Purser . It may need to be specially ordered as few Builders' or Civils Merchants carry stock. The product comes in 25 kg packs, and may need to be broken up into 2-5 kg chunks before being placed in the tar boiler. It takes approximately 1 hour to melt down a single 25 kg pack and each pack will seal approximately 2-12m² of paving, depending on sett size, joint width and depth of filling.

Pitch jointing can be used with both rigid and flexible sett pavements, as although the pitch does 'set', it never becomes irreversibly 'hard', and even when 'set', it does allow a small amount of movement. It is almost a statutory requirement when creating traditional or heritage sett pavements.

On larger schemes, two or more boilers may be used, and on big commercial projects, hot, molten pitch may be delivered to site by insulated tanker.

The traditional process of pitch jointing is very simple. Once the paving elements have been laid and checked for level/alignment, the joints are partially filled by sweeping-in a suitable clean gravel (no fines), usually 6mm or 10mm, to within around 25mm of the head of the setts or pavement surface. Any surplus gravel that is 'proud', ie, above the heads of the setts, should be removed before filling the joints with molten pitch, which is poured from a can and allowed to flow in and around the gravel, sealing the joint as it cools and solidifies.

Molten pitch is DANGEROUS. It will take the skin off you if allowed to come into contact with bare flesh. Protective gloves and safety goggles should be worn at all times and any bare flesh should be covered. Short sleeved shirts, rolled-up sleeves and/or shorts should never be worn during this task.

A steel tar bucker or steel watering can is filled with the very hot (180-200°C) molten pitch from the tar boiler using the ladle.

The pitch should be molten and free-flowing but not boiling. If the liquid is bubbling and spitting, it is too hot and should be allowed to cool in the tar bucket for a couple of minutes before being poured into the joints.

The pitch is then carefully poured into the joints, taking care to avoid accidental spillage or splashes.

The liquid pitch will flow down through the gravel and may take some minutes to settle. This can often leave a U-shaped surface to the joint as the pitch in contact with the edges of the pavers cools and clings while that in the centre of the joint remain hotter for longer and flows deeper into the gravel. Consequently, joints may need topping up one or more time to bring the pitch 3-6mm from the head of the sett.

As long as the pitch is sufficiently hot, top-up pours partially re-melt the underlying pitch and so form a satisfactory bond with no risk of lamination. 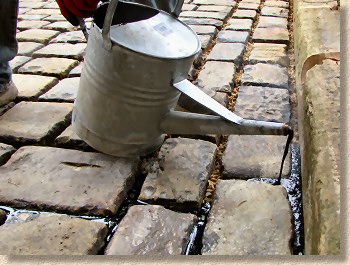 The weather can have an effect on jointing with pitch. In wet or damp conditions, there can be an almost explosive relationship with the hotter-than-boiling-water pitch and any residual moisture and this can cause droplets of the molten pitch to fly everywhere. In windy weather, the breeze can blow the stream of molten pitch 'off course' as it is poured, leading to accidental staining or spillage onto the heads of the setts.

Any pitch that is spilled over the pavers can normally be removed by allowing it to cool and then trimming back with a craft knife. Removed material can be returned to the boiler for re-use. Occasionally, molten pitch may bond to the surface of the pavers and can be difficult to remove. This normally only happen when the pitch is boiling; that is, too hot and bubbling rather than simply molten and close to boiling point. In such cases, remove as much of the surplus as possible using the knife. Any residual staining will normally weather and abrade in a matter of months, but if it is likely to be a problem for the client, it can often be removed using thinners such as natural turpentine.

It's important the joints be filled to within 3-6mm of the top of the pavers. When the jointing is left low, this results in a relatively uneven surface that is difficult for pedestrians to walk across and, in the case of setts, will result in much higher levels of traffic noise as the tyres literally 'rattle' over the surface.

The pitch should solidify within 10-15 minutes, although it will remain warm to the touch and relatively 'soft' for some hours. It is best to allow the jointing 4-6 hours to thoroughly cool before allowing it to be used.

The freshly-poured jointing tends to have a glossy appearance but this will dull over the next few days as the surface is trafficked.

It's unfortunate that pitch has fallen out of favour in recent years as none of the modern material, be they cement or resin based, come close to it in terms of aesthetics. It doesn't crack (unless laid as a shallow 'crust' over other material), it accommodates small movement without failing, and it retains it deep colour permanently. It's a subtle, undemonstrative material that forces the eye to focus on the paving and not on the jointing.

The only downside is that it's not good with fast moving vehicles and it can break down (decompose) but only after after many, many years of service.

Personally, when it comes to sett paving, I need to be compelled to use anything else! 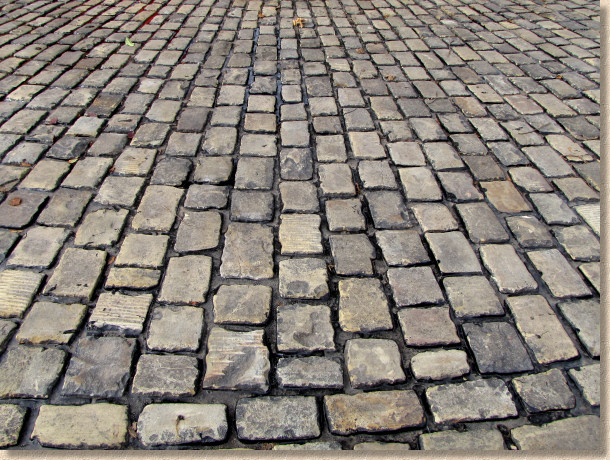