Last year was the Pavestone debut for review and they must have quite liked, or at least not been too ipssed off with what was written, because they’ve put up their all new 2019 brochure for more of the same. And a quick flick through as soon as it landed suggests that it will be a real pleasure to do so.

A slightly different look to last year, though not radically so. It’s maintained the landscape format, the impressive big cover shot, the simple, elegant Pavestone logo, but the bold white header space is gone and the " Design For Living " strapline has been demoted from a splash to a subtle feint text in the bottom left corner. Nothing significant, but very much in keeping with what lies inside. 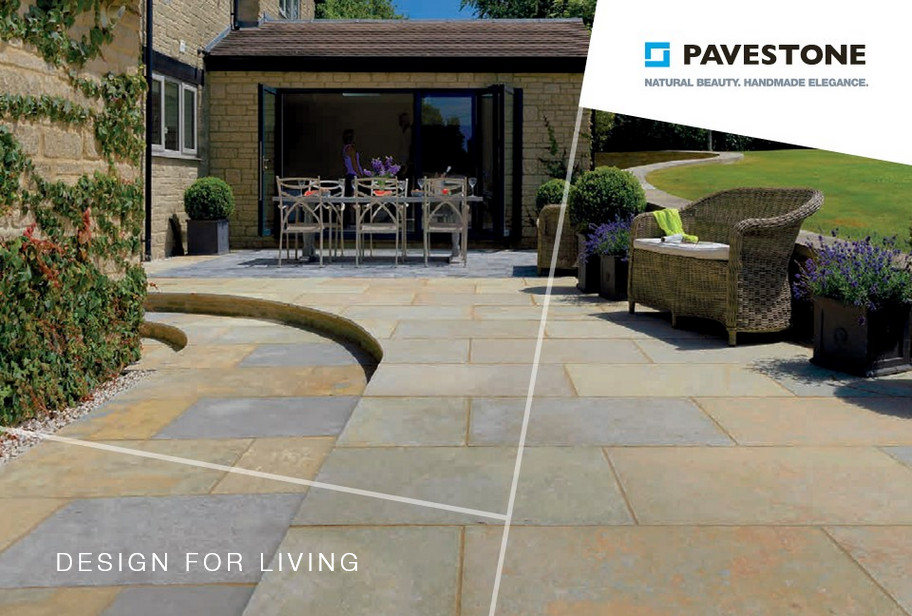 The contents page is there as soon as the cover is peeled back and it is little changed, with logical product groupings and more pages devoted to said products, totalling 118, up from last year’s 108. The Technical Section holds its ground at 18 pages, so an extra 10 pages overall, and, unsurprisingly, a good chunk of that additional content has gone to porcelain, the in-flavour paving choice for the end of the second decade of the 21st century.

But before we paddle our way through amongst all things’ porcelain, yet another technological twist from the geeks at Pavestone. Last year we had drone flights up and above various gardens, and this year, the pilot has clearly improved their skills and is now offering amazing garden fly-throughs, more shots from eye level, more close-up detail shots and much, much more to admire.

As before, this trickery is triggered by means of blocky QR codes and it is well-worth wasting (or investing!) a relaxing half-hour or so on a dull evening or chilly weekend to admire what has been achieved, not only by the garden builders, but by the drone drivers and the tech team that brings us this modern-day wonder. I know that every contractor with an eye for promotion is warily launching a drone over their more impressive jobs and then uploading it all to their preferred versions of social media, but these little masterpieces from Pavestone are in another league and should not be missed.

If I want to find a niggle with this brochure, it’s the lack of any indication as to what is new. It’s a niggle not picked-up on last year because, for review purposes if not for personal interest, *everything* was new, but this time it’s more of a ‘compare and contrast’ exercise, and it’s a bit of an annoyance flicking between the two editions to check what is and what isn’t new to us all.

So, for the porcelain, Crosswood , the timber-like one, seems to have a new, darker brown-wood option, named Coco, and the lightly-textured, large format Discovery has gained two newbies in Horizon Storm (dark) and Horizon Sunset (greyish?!?!?).

No changes with limestone-a-like Dolomite , but two swaps at Al Fresco , with the dark Mirium giving way to the slightly less nocturnal Mude, and a lighter grey Soile seemingly replacing the nutty Hazel. Both Soile and Mude make a surprise appearance later in the brochure.

The three-sized Opus range doubles-up its crew with two new entries: a mid-grey Palemon and a muddy-rusty-looking Canossa.

And it’s all new with the basic Simply Porcelain range – out goes the light and dark options of 2018 to be replaced by four greys, from the barely grey Bianco (which does not look ‘white’ at all, despite the name) through to the sombre Nero.

It’s a good selection yet restrained. Yes, they could do more; they could go porcelain potty as some suppliers have this year, but I sense that what Pavestone offer is a more considered selection of the styles and colours more likely to appeal to the buying public, presenting customers with enough of the essentials without dazzling and overwhelming them with quantity.

And on that word, "essential", what is happening with the little stickers slapped on most of the pages advising that the use of a slurry primer bond bridge is, and I quote, "Recommended"? Last year, for the very same products, its use was "Essential", and, indeed, for several of the stone paving products to come, the use of a primer is "Essential", yet the porcelains have been downgraded to "Recommended". Why is that?

In my not-so-humble opinion, a primer is always, no-exceptions, absolutely, definitely essential with all porcelain and for most of the ceramics ( what’s the difference? ). If a primer is needed for natural stone, then it is most assuredly needed for porcelain. Oh! I know that its use with some of the natural stones, such as the granite, is more likely to be more about preventing Reflective Staining than ensuring sound bonding, but even so – don’t be fooled. ALWAYS use a primer with porcelain. Always!

Anyway, on to that Natural Stone and there’s less to report, it seems. The undeservedly popular Sawn products have lost a member in Maple, but, to be brutally honest, if one had to go, then it’s right that the far-too-soft Maple has been felled, as it is/was a bugger for bringing on the algae.

Two further casualties in the Tudor Antique range, with Tithe and Reformation, neither of which served with distinction if we’re being frank, falling by the wayside, and one prisoner exchange in the Classic Sandstone with the banded Sahara, another softy, making way for Rippon, which looks like a blend of greys and pinks judging from the single phot provided.

It’s ‘as you were’ with the wickedly under-valued limestones, which really do deserve more widespread use, and the same with the ever-reliable Brazilian Slate, which is hard to fault. However, the standard Slate range is halved by the loss of the can-be-troublesome Rusty option, leaving the dour Midnight to battle it out with the far superior Brazilian product it seeks to emulate.

However, Midnight Slate has found itself another role, as it’s now available as a circle pack (2,700x2,700 with 2,400 dia circle) along with Lutyens Slate in a more art-deco styling and at a slightly smaller size, 1,800x1,800 with 1,500 dia circle format. I do like the look of that Lutyens option. I can see that working well with a golden or buff outer circle of setts or flagstones.

Speaking of Setts, or mis-speaking of them as ‘Cobbles’ as they do on page 69, the orangey-brown Priory option is gone, but this is still one of the most useful product lines available from Pavestone, as they can be used for sett-paved areas, as edge courses, or as small detail areas within a larger scheme. Lovely!

Meanwhile, the Setts that *are* referred to as Setts, has seen the previous Rusty Slate option replaced with a Light Grey (Kandla Grey?), and the Rumbled Pavers , which despite the blurb on page 75 are still (technically speaking) setts, no matter the thickness, lose the Harvest Blend option but, thankfully keep hold of the gorgeous Lakeland Blend mix of three tonally different greys.

Finally, for the stone section, no changes at all with the enduring Natural Stone Block Paving, which retains its charm and, it would appear, its popularity. Even though these ‘blocks’ (which are also setts, if we’re being pedantic) can be laid close-jointed, they look so much better when laid with a mortared joint. Yes: I know it’s a pain in the arse to lay them that way, and it takes longer and costs more, but the finished effect is very definitely worth it.

On we sail to Decorative Concrete and the tile-like Mosaic stays as it was, but we have lost the two “Hybrid Concretes” from 2018, which is a little disappointing. These ‘hybrids’ will be the next big thing in concrete, but maybe the time isn’t quite right. I had thought the very white Manhattan would have fared reasonably well in the heatwave we had last summer, but maybe these advanced pavings need to be parked-up for a couple of years and let the all-conquering porcelain run its course. They *will* be back, in one form or another. Hybrid concretes have business to do with the British and Irish paving markets, but probably not just yet.

Nothing of consequence to report with the range of edgings, but, as with many other suppliers this year, a basic range of porcelain cladding has been added to the walling offer. Two options, Soile and Mude, which disappeared earlier in this review, pop-up again as the haphazard off-cuts type of cladding, sometimes referred to as ‘Stack Cladding’ (probably because a stack of dust and dirt accumulates on the sticky-out bits!), and will complement those trendy three-dimensional garden builds that do seem to be catching on.

And, other than the technical section, that’s shallot! However, it would be a mistake to dismiss that technical info as boring and unnecessary, because it has plenty of important and useful information presented in a very accessible manner. Of course, there is the size and pack info, the mini-swatches and essential warnings, but beyond that there is some good advice about basic installation, which all of us, DIYer, occasional installer or experienced contractor, would benefit from reading. Rather than attempt to provide a comprehensive ‘How To’, as was usually the case 20 years ago, there’s a single page which highlights in rudimentary terms the biggest pitfalls with installation. Sound advice, sparingly treated and simply presented.

And so, another Pavestone brochure sails pleasantly through the fingers and leaves a warm feeling of satisfaction in its wake. It really is a gem of a brochure, with everything in proportion, ship-shape and Bristol fashion.

The product range is comprehensive without being over-bearing. The presentation is most definitely image-led and a joy to behold. The text is unintrusive, the photography is a match for any other supplier, regardless of budget, the paper weight and texture feels opulent but not ostentatious, and the whole production has an air of quality to it.

For those looking to invest in a new patio or driveway this year, it’s a treasure-ship packed to the gunwales with goodies, while contractors aiming to cast off with a sale will find it a steady and reliable pleasure craft, a delight through which to navigate and let the client cruise through the options, yet a thrill-provider that will put them mast-high above their competitors. One of the very best for 2019, Cap’n!