Romex HQ in Germany has announced it plans to continue with its unique 5 year system guarantee for all stone pavements constructed using its 2-part jointing mortars in combination with the Trass bedding system. The guarantee was originally launched last year and has been well-received on the continent. 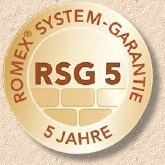 Romex®-Trass-Bed , as it has been eloquently dubbed, is a frost-resistant permeable bedding product that is mixed on-site to a semi-dry or moist consistency and than placed over a free-draining base or sub-base as a 30-50mm layer onto which the flags, setts, blocks or cobbles can be laid.

Anyway, such is the success they've had with this system in mainland Europe, they've decided it's time that the soggy islands on the edge of the continent should enjoy its benefits too, so the system is now available in both Britain and Ireland via the usual agents.

The big selling point for the bedding is its permeability. The company-issued images shown here show it to have a texture similar to that of Rice Crispie cakes, although personal experience suggests it's more akin to a very coarse mortar, made with chunky 6mm grit. The so-called Romex system requires the newly-laid paving to be left for 48 hours while the bedding cures, and then it can be jointed with any of the Romex 2-part resin mortars , although it would seem to make sense to use the permeable Romex® Drain mortar to create a truly permeable pavement.

The company recommends that smooth or sawn paving materials should be primed using the Romex Bond Bridge Slurry, which their never-knowingly-concise translation department refers to as Romex®-Adhesion-Elutriant . Just rolls off the tongue, doesn't it?

Such is their confidence, that they are offering all of their customers this 5 year performance guarantee. Recent changes in the German tendering system means that for many commercial and public works, contractors are required to accept a 5 year defects liability period. Romex is, at the time of writing, the only mortar manufacturer to provide their customers with such a guarantee.

Further information on the guarantee, and a performance certificate (in German), can be downloaded from the Romex website .